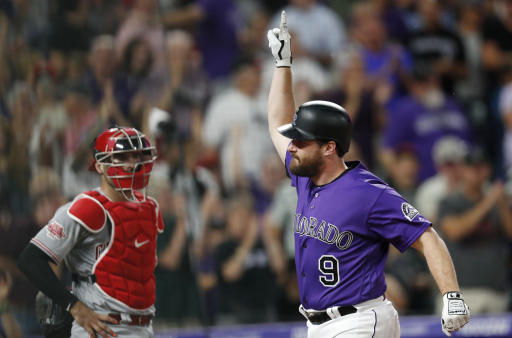 DENVER (AP) -- Daniel Murphy 's first homer at Coors Field as a member of the Colorado Rockies was a long time coming.

Murphy hit a go-ahead solo shot in the eighth to help the Rockies rally for a 3-2 win over Cincinnati Reds on Friday night that snapped a six-game skid.

This game marked the first showdown in major league history between starting pitchers with the last name ''Gray'' - Sonny for Cincinnati, Jon for Colorado - according to Stats.

In the sixth, Jesse Winker hit a one-out liner down the line in left that caromed off the side wall and eluded Dahl for an RBI triple.

The Rockies limited the damage as Jon Gray struck out Joey Votto with catcher Tony Wolters then picking off Winker.

Jon Gray was aided by some splendid defense, including a barehanded play from Nolan Arenado on Yasiel Puig's slow roller in the fifth.