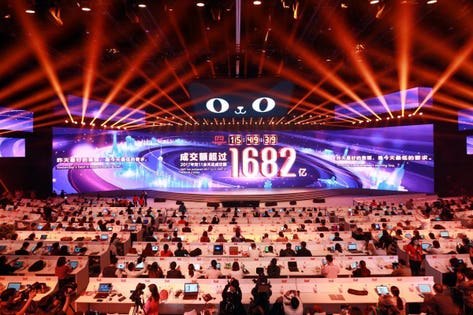 Cat Coronavirus Diary – Day 10
GIFs on Instagram: Drive Consumer Eng…
Rug Mistakes and How to Fix Them
Everybody wants me, so when do I self…
Window Shopping in Historic Downtown …

This year’s event is taking place against a backdrop that includes a trade war with the U.S., something billionaire founder Jack Ma recently called the “most stupid thing in this world.” Alibaba, which began in 1999 as a platform for connecting buyers from around the world with Chinese suppliers, benefits from the flow of goods across borders.

As part of the company’s efforts to expand into Southeast Asia, Alibaba’s subsidiary Lazada was pushing Singles Day promotions for the first time in Singapore, Malaysia, Thailand, Indonesia, the Philippines and Vietnam.

Ma, who is currently ranked the wealthiest person in China with a net worth estimated at $34.4 billion, has been leading the tech giant since he co-founded it with 17 other people in in the coastal city of Hangzhou.

Daniel Zhang, chief executive officer of Alibaba, speaks during an interview at the company's headquarters in Hangzhou, China, on Sept. 9, 2017 (Photo: Qilai Shen/Bloomberg).