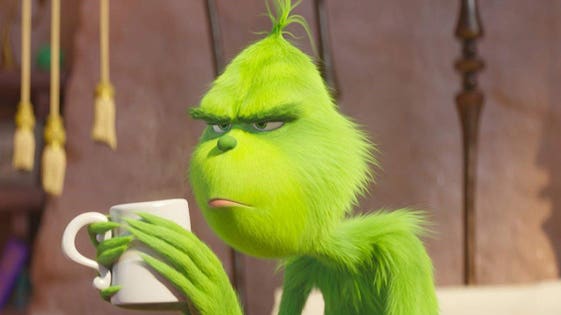 The Benedict Cumberbatch-starring (and Pharrell Williams-narrated) toon benefited from obvious seasonal appropriateness and a relative lack of big-scale animation (all due respect to Smallfoot ) since Hotel Transylvania 3 back in July.

How to Leverage Entrepreneurship and …
When will I get to write?
10 Benefits of why you should hire th…
Merry Christmas and Mahatma Gandhi
CBD 2020: What to Expect + Our Top Pr…

While it didn’t receive rave reviews, the notices were not too grim and offered assurances that it was a mostly faithful adaptation that would entertain the kids.

It helped that this was a comparatively easy pitch, since Illumination has established itself as a viable brand name and How the Grinch Stole Christmas is a well-known and well-liked story.

Universal sold the hell out of this one, with the usual multimedia saturation campaign, including media-friendly billboards around LA with the Grinch offering cynical pronouncements that are frankly meaner than anything he says in the movie.

It has been 18 years since Jim Carrey’s How The Grinch Stole Christmas crushed all comers and snagged a $55m debut (the fifth-biggest ever at the time) for a $260 million domestic (biggest of 2000) and $345m worldwide cume on a $123m budget.

Walt Disney's Ralph Breaks the Internet will provide Thanksgiving competition, but then it’s clear sailing until the year-end Christmas blitz.