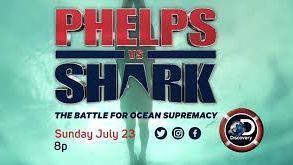 The special culminated in 56-degree waters off the coast of South Africa, where Phelps, the 23-time Olympic gold medalist who grew up in Rodgers Forge, donned a 1-millimeter-thick wet suit and a specially designed mono-fin before attempting to outrace a computer-generated, superimposed great white shark 100 meters.

(Brazil’s César Cielo didn’t have a wet suit or a mono-fin when he set that mark at the 2009 world championships.)

In a previous race, Phelps swam 50 meters in 18.7 seconds, with the Discovery Channel team comparing his time with those of a hammerhead and a reef shark.

While he didn’t beat the hammerhead, which swam the distance in 15.1 seconds, he was able to edge the reef shark by 0.2 of a second.