Road safety tournament is currently organized in India these days. Many veteran players of over 40 years are currently playing in this tournament. India Legends and West Indies Legends faced off each other in the first match of the tournament. India Legends team won this match by 7 wickets due to their excellent performance. Along with winning this match, they have also earned 2 important points in the tournament. Virender Sehwag and Sachin Tendulkar batted brilliantly.

India won on the strength of Sachin-Sehwag’s great performance.

India Legends team won the toss in this match and decided to bowl first. Hence, batting first, the West Indies legends team scored 150 runs at the loss of 8 wickets in their quota of 50 overs. 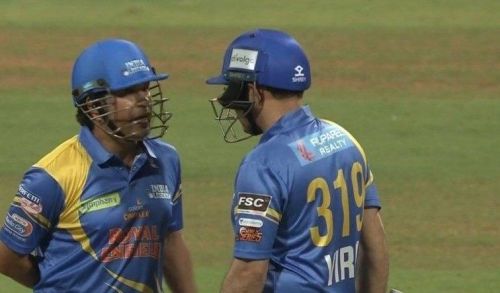 During this time, a video became increasingly viral on social media. The video shows Sachin Tendulkar, the God of Cricket, busy in boxing with Imran Pathan, son of former Indian all-rounder Irfan Pathan. Irfan Pathan posted this video in his official Instagram profile.

The family of the players is staying with them in the hotel. So the players are getting a lot of opportunities to spend time with their family along with getting involved and enjoying the match.

You can see in this Instagram video how former Indian batsman Sachin Tendulkar is boxing jokingly with Irfan Pathan’s son.

India Legends started the Road Safety World Series 2020 on a winning note. They defeated West Indies Legend by seven wickets in the tournament opener at the Wankhede Stadium in Mumbai on Saturday, March 07.

! Imran boxing with @sachintendulkar , this kid has broken the cardinal rule & will realize it only years later!