The Origin of Football Shirt Numbering

The reason behind the printing of jersey numbers is simple: it helps referees and fans distinguish players on the pitch. 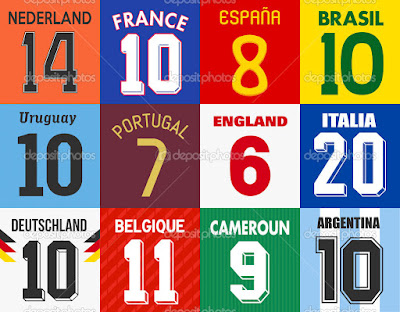 The first documented instance of numbers being used in association football was on 30th March 1924 when the Fall River Marksmen, an American football club, based in Fall River, Massachusetts played St. Louis Vesper Buick, in St. Louis, Missouri during the 1923–24 National Challenge Cup, 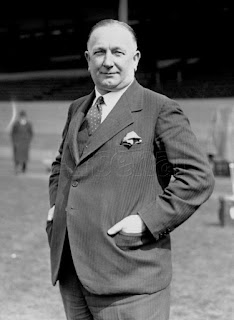 According to history, numbered shirts were first worn in association football in Europe on 25th August 1928, by English clubs Arsenal and Sheffield Wednesday. In the mythology of Arsenal Football Club, it is often stated that Herbert Chapman, (right) the manager at the time, “invented” the notion of numbered shirts.

Certainly before the first match of the 1928/29 season no league team in England had turned out in numbered shirts, but on the same day Chelsea played Swansea Town and they had their shirts numbered. The difference between the two games was that at Chelsea the goalkeeper did not wear a number – a tradition that continued in English football once numbering of players became common.

So if Mr.Chapman was the keen advocate of numbering as the stories say, he rather cleverly managed to persuade Chelsea to undertake the same experiment on the same day.

The Monday newspapers on 27th August picked up on the story and deemed the idea a success, and it is reported in some sources that for both these matches one team would wear numbers 1 to 11, according to their positions on the field, and the other team 12 to 22, but there aren't any pictures to confirm this, and verification is vague.

Either way the Football Association didn’t like the idea and ordered the experiment to be abandoned. I don’t know what justification they gave for this.

In the 1934 AGM of the Football League Management Committee numbers was however once again rejected but finally on 5th July, 1939 the Management Committee decided that players should wear numbered shirts, with both sides wearing 1 to 11 in the format described for the first games in 1928.

However the 1939/40 season had hardly got underway when war was declared and the League programme abandoned. But the decision had been taken, and when League football returned on 31st August 1946, numbered shirts were available for all teams, both in England and Scotland.

As most teams still played the same tactical formation as existed during the 1928 experiment the standard numbering of shirts followed the classic 2-3-5 formation, with numbers 2 and 3 assigned to the full backs, 4, 5, 6 to the half backs, and 7 to 11 the forwards.

When substitutions were introduced to the game in 1965, the substitute typically took the number 12; when a second substitute was allowed, they wore 14. Players were not compelled to wear the number 13 if they were superstitious.

In 1993, The Football Association (The FA) switched to persistent squad numbers, abandoning the mandatory use of 1–11 for the starting line-up. The first league event to feature this was the 1993 Football League Cup Final between Arsenal and Sheffield Wednesday,[citation needed] and it became standard in the FA Premier League the following season.

Squad numbers became optional in the three divisions of The Football League at the same time, but only 10 out of 70 clubs utilized them. Most European top leagues adopted the system during the 1990's.

The Football League made squad numbers compulsory for the 1999–2000 season, and the Football Conference followed suit for the 2002–03 season.

Players may now wear any number (as long as it is unique within their squad) between 1 and 99. To date, the highest number worn by a player in the Premier League is 78, by Manchester City's former Spanish striker José Ángel Pozo (below) against Sunderland on 3 December 2014. 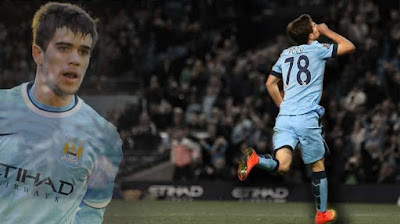 Some players keep the number they start their career at a club with, such as Chelsea defender John Terry, who has worn the number 26 from when he became part of the first-team squad. On occasion, players have moved numbers to accommodate a new player; for example, Chelsea midfielder Yossi Benayoun handed new signing Juan Mata the number 10 shirt, and changed to the number 30, which doubles his "lucky" number 15. Upon signing for Everton in 2007, Yakubu refused the prestigious number 9 shirt and asked to be assigned number 22, setting this number as a goal-scoring target for his first season, a feat he ultimately fell one goal short of achieving.

As commercialization has crept into the game, the decisions these players make are becoming an increasingly big deal for the marketability of them and their clubs; to be a bespoke commodity in a game saturated with personalities is becoming increasingly difficult, after all.

So players hold few concerns for the traditional associations with various numbers. Now players will pick lucky numbers, year of birth or numbers that their boyhood idols wore and even numbers to symbolize their rapper alter-egos! And that’s to name but a few.

But there are still some nods to tradition and heritage. When England play their friendly games they'll wear the classic number arrangement based on their positions on the pitch, as will a host of various national teams, something that'll still make purists purr with nostalgia.

Numbers are retired to honor a player who has given significant contributions to a club or national team. Below are some retired jersey numbers:

* Number 6 of Milan – for Franco Baresi, one of the finest defenders in football history.

* Number 6 of Roma – for Aldair, one of the best Brazilian full-backs.

* Number 6 of West Ham United – for Bobby Moore, one of England’s greatest footballers. 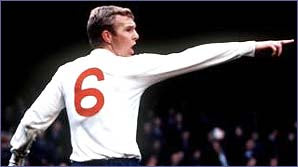 * Number 10 of Brescia – for Roberto Baggio, the Italian is regarded as one of the greatest footballers of all-time.

* Number 10 of Kispest AC/Honvéd – for Ferench Puskas, considered one of the best Hungarian players of all time.

* Number 10 of Napoli – for Diego Maradona, who help turn them from one of the poorest to one of the most successful clubs in Serie A between 1984 and 1991.

* Number 14 of Ajax – for Johan Cruijff, considered as Netherland’s best ever player.

* Number 17 of  Helsingborgs IF - for Henrik Larsson, the highly decorated Sweden striker. 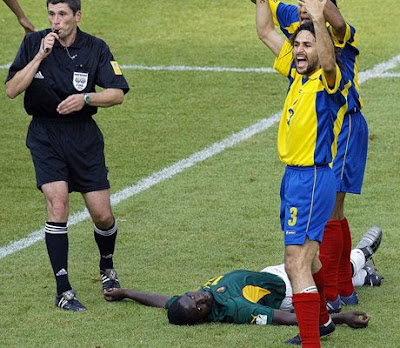 * Number 23 of Manchester City - for Marc-Vivien Foe, who was a City player when he collapsed and died while playing for Cameroon, aged 28. An autopsy found he been suffering from a condition called hypertrophic cardiomyopathy.


Over the years, achievements of world-class footballers and their fame has rubbed off on the numbers they wore.

From the legendary number ten shirt of Diego Maradona to the iconic number three shirt of Paolo Maldini, here are some of the most famous shirt numbers and the players who made them famous. 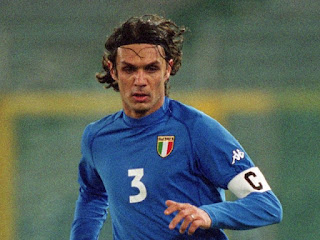 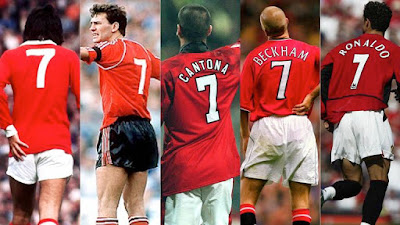 
In football, the fans are dubbed the 12th player because their support is equal to having an additional player on the field. Some football clubs that received strong support from fans retire the number 12 jersey to honor them.

Thus, Bayern Munich, Feyenoord, Portsmouth, Fenerbahce, RC Lens, Dynamo Kiev, Lazio, Zenith St. Petersburg and Glasgow Rangers are some of the clubs where the number 12 shirt has been permanently withdrawn to pay tribute to the loyalty of supporters.


Unusual or notable shirt numbers in football include the following:

* In 1996 when Portuguese star Paulo Futre learned he would have to wear the No.16 shirt at West Ham, rather than his preferred No.10, he brought in a legal team to resolve the issue.
Harry Redknapp, in his autobiography Always Managing, wrote: "Eddie Gillam, our trainer, had given him the No.16 shirt and got it thrown back in his face (before the first game of the season against Arsenal). Next thing, Paulo was in my face, too: 'Futre 10, not 16,' he said. ‘Eusebio 10, Maradona 10, Pele 10; Futre 10, not f***ing 16."

Redknapp said: "I tried to be firm. "Paulo, put your shirt on, get changed, please, we have a big game. If you don’t want to wear it, Paulo, off you go," And he did.
"The following Monday, Paulo came back in with his team of lawyers to negotiate for the No.10 shirt."

* From 1997 to 2000 Chilean striker Iván Zamorano, wore number "1+8", or number 18 with a plus symbol between the two digits, for Internazionale of Milan , after his number 9 was given to Ronaldo. 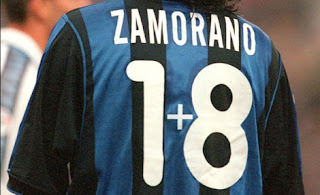 * In 2000, Moroccan international Hicham Zerouali was allowed to wear the number 0 for Scottish Premier League club Aberdeen after the fans nicknamed him "Zero."

* In 2000, Gianluigi Buffon, the Italian shot-stopper caused a right fuss when he opted to wear the 88 shirt at Parma. At first his choice seemed innocuous enough, though suddenly, Italy's Jewish community were outraged.

The number, they explained, was a neo-Nazi symbol; 'H' is the eighth letter of the alphabet, so putting two together makes 'HH', or, more chillingly, 'Heil Hitler'.
Buffon was quick to defend his actions. "I have chosen 88 because it reminds me of four balls," he said. "And in Italy we all know what it means to have balls: strength and determination. And this season I will have to have balls to get back my place in the Italy team." 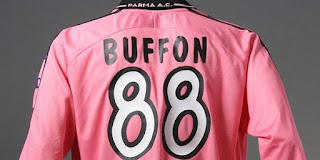 "At first I didn't choose 88. I wanted 00 but the league told me that was impossible. I also considered 01 but that was not considered a proper number. I liked 01 because it was the number on the General Lee car in the TV series The Dukes of Hazzard."

* In 2004, Porto goalkeeper Vítor Baía became the first player to wear 99 in the final of a major European competition, the UEFA Champions League.

* In 2005 French international left-back Bixente Lizarazu signed for Bayern Munich, and chose to wear shirt number 69. Though referred to as a commonly lewd number due to certain connotations, Lizarazu actually chose it due to a range of rather coincidental measurements:- he was born in 1969, weighed 69kg and had a height of 1.69 metres. Hence the choice of the number.

* At the beginning of the 2013–14 season, Barnet midfielder and player-manager Edgar Davids allocated himself the number 1 shirt, announcing he intended to "set a trend". Davids was hardly a trailblazer however:- Ruud Geels (Holland, 1974), Ossie Ardiles (Argentina, 1978) and Stuart Balmer (Charlton 1990) had all worn the number one shirt before him.

Shirt numbers are not the most important facet of the game by any means, but they have brought wonderful symbolism and esteemed relevance to a host of players throughout the history of football. And as the struggle to be unique becomes increasingly critical for the big players that dominate the footballing landscape, it’ll be interesting to see what’s next in store for us when it comes to what’s printed on the back of a shirt!

The Origin of Football Shirt Numbering