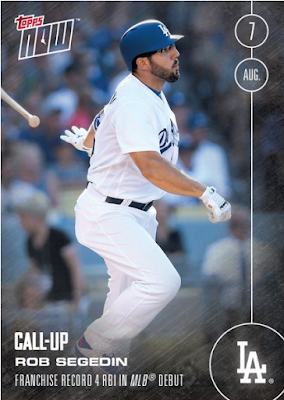 Rob Segedin has made quite an impression this season as a member of the Dodgers.  He originally came to Los Angeles earlier this year (January 2016) as a part of trade with the Yankees.  New York received two players the Dodgers had recently designated for assignment (Ronald Torreyes and Tyler Olson) and we got the 27-year-old hard-charging never-say-die veteran minor leaguer as compensation.

He started the season with the Oklahoma City Dodgers and proceeded to exceed all expectations.  In Triple-A he is slashing an impressive .319/.392/.598/.989 with 21 home runs, 69 RBI's and 23 doubles.  Naturally, with the Dodger in the midst of one of the worse injury plagued season in recent memory they decided to call him up to the "Bigs" for the first time in his career.

Again, he has exceeded expectations.  Segedin not only record his very first Major League hit in the fourth inning of yesterdays game, it also happened to score two runs to give the Dodgers a lead.  An inning later he came up again, with the bases loaded, to drive in another two runs.

Overall, he recorded two hits and drove in four runners to set a Dodgers franchise record for RBI's as a Dodger during a MLB Debut.  In honor of his fantastic first day Topps has issued a 2016 Topps Now card.  Go here to check it out and order. 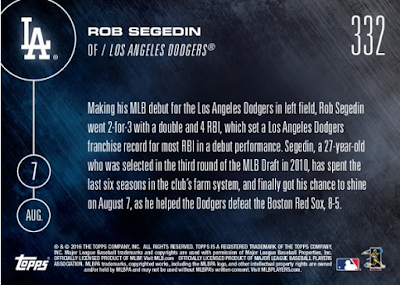