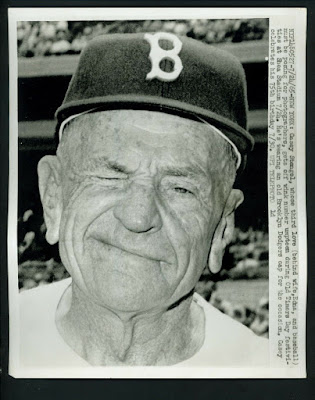 Casey was always a ham. Per the UPI Telephoto descriptor (eBay auction link):

7/24/65 - New York: Casey Stengel, whose third love (behind wife, Edna, and Baseball) must be posing for photographers, gets off wink number umpteen during Old Timers Day festivities at Shea Stadium 7/24. He's wearing an old Brooklyn Dodgers cap for the occasion. Casey celebrates his 75th birthday 7/30.

The Giants will open the 60-game regular season at Dodger Stadium on July 23 if the tentative schedule is not changed, several sources have told The Chronicle.

When I think of all of the statements made about Hodges, one shared by his son while at the his father’s funeral, Jackie Robinson then held Hodges Jr. and said, “Next to my son’s death, this is the worst day of my life.”   Robinson himself would die of a heart attack six months later.   Hodges was a very good player and a very good man!

The Colorado #Rockies have signed slugger Matt Kemp to a minor-league contract to replace Ian Desmond on the roster.
— Bob Nightengale (@BNightengale) June 30, 2020

This move simply wouldn’t have happened in late March, but intervening developments made it possible. We learned last night that right-handed-hitting Rockies veteran Ian Desmond would opt out of the 2020 season, leaving a potential roster spot. And the Rockies are newly in need of designated hitter options, given the expansion of the hitter-only spot to the National League for 2020.

#MarkMcGwire says on #DodgerTalk that he believes players should play with masks on this upcoming 2020 season. (@THEREAL_DV) https://t.co/kUeUiren2v

What was long expected will be made official today: There will be no Minor League Baseball in 2020.

According to multiple sources, Minor League Baseball is expected to officially announce this afternoon that the season has been shelved because Major League Baseball has failed to provide players. Teams have been informed that they can make their own announcements later this afternoon after MiLB’s announcement.
...
The volatility of the coronavirus and a spike of cases in both big league training states of Florida and Arizona have thrown the possibility of the instructional league and the Arizona Fall League (as well as a potential companion league in Florida) into serious jeopardy.

The Dodgers have committed to continue paying their minor leaguers a $400 weekly stipend through August.
— Jorge Castillo (@jorgecastillo) June 30, 2020