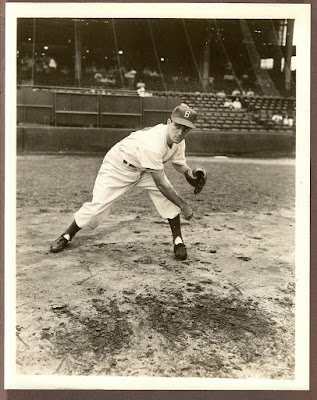 Check out this fantastic press photo of a young Carl Erskine from the Houston Post. The clarity and contrast between dark and light, along with what I believe is the grandstands from Ebbets Field is phenomenal. It is dated April 29, 1959, so it's clearly not a period photograph. Erskine is wearing a Brooklyn Dodgers cap and by 1959 the Dodgers had already moved to Los Angeles. I suspect this is a photograph that the Houston Post kept in their library for future use. To collectors, this photograph would be described as a Type II photo -- a picture printed from the original negative more than 2 years of the photo being shot. (eBay auction link).

The event kicked off with participants reminiscing about the experiences and the figures that sparked their interest in baseball. Valenzuela and Graterol pointed out that they come from baseball-loving families and learned the game from parents and siblings. González, who spent much of his childhood in San Diego, said his dad took to him to watch Valenzuela pitch and that he grew up admiring the hitting prowess of late Hall of Famer Tony Gwynn.

RSVP now! Our next #DodgersZoomParty presented by @BlueShieldCA and @GetSpectrum is on 5/26 at 6 p.m. PT.

I would like to thank @ElNidoFamily for partnering with my @wildhorsefdn on Monday’s event to bless over 100 families who are a part the #GRYD program. Thank you to Mayor Eric Garcetti and the office of Gang Reduction Youth Development! pic.twitter.com/771YgAnCLK
— Yasiel Puig (@YasielPuig) May 20, 2020

On Monday, Rick rallies an influential friend, @kikehndez of the LA @Dodgers, to assist him in making one of his wife Maya’s life-long dreams come true. #BoldandBeautiful pic.twitter.com/1swOq4eQCk
— Bold & The Beautiful (@BandB_CBS) May 21, 2020