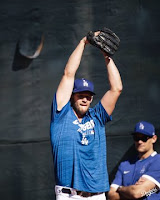 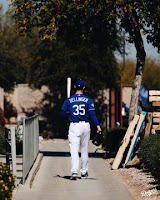 Welcome back, boys! I'm more excited for this season then I've ever been.

Photos above via @Dodgers on twitter (here & here). Below are more links to check out:

"Anything that tends to break down the bulwarks of segregation must be forcibly met by this general assembly. We have a situation in Georgia which has come about because of a national situation. I am referring to the Negroes in organized baseball in this state. It is unfortunate that some few people would participate in the destruction of our institutions for a few dollars."

Bellinger: "I thought Manfred's punishment was weak, giving them immunity. I mean these guys were cheating for three years. I think what people don't realize is Altuve stole an MVP from Judge in '17. Everyone knows they stole the ring from us."

Koan #6
I was nervous about switching therapi…
Baroque Design for the Home
— Jorge Castillo (@jorgecastillo) February 14, 2020

Clayton Kershaw said it was a beautiful thing that so many in baseball were reacting honestly and openly about their feelings and moving on at their own paces.
— Pedro Moura (@pedromoura) February 14, 2020

Since it’s @dodgers night I felt like I need to get us little redemption!! pic.twitter.com/gTBL3jMeLe
— Bailey LA Kings (@BaileyLAKings) February 13, 2020

“When we took our Dodger minor league team to Midland I knew, because of my growing up in Midland, that the players would have a great fan base and support to make their experience better,” Collins said. “When I was young, we always had great community support. It will be an honor to see and speak with so many people when I’m there.”