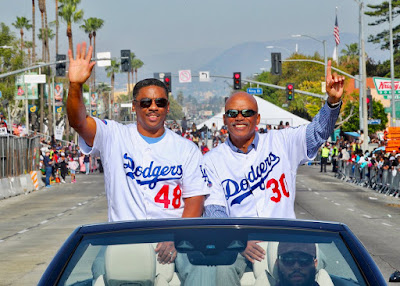 Photo above via @Dodgers on twitter. Below are more links to check out:

When Harvey was chosen for Cooperstown, Tommy Lasorda, the former Los Angeles Dodgers manager, recalled how “you could see every time he was on the field, he gave every ounce of energy he had, and I can’t say that about a lot of guys.”

But Lasorda was not always thrilled with Harvey. One time, when Keith Hernandez, the Mets’ first baseman, was batting, Harvey’s calls of two balls and no strikes brought howls from Lasorda in the dugout. “Don’t let those guys intimidate you,” Hernandez told Harvey. His response: “Nobody’s ever intimidated me, son.”

When you come to this country you learn about great Americans like Dr. King. Today thinking about his sacrifice. #ThankYouMLK50
— Yasiel Puig (@YasielPuig) January 15, 2018

"I can certainly expect to see him as a starter," said (Dave) Roberts. "How things shake out in Spring Training will kind of determine where he starts, but [our goal is] for him to continue to develop as a starting pitcher. Got his feet wet last year, and I think that it was encouraging in a lot of ways for Walker -- the quality of hitters faced, the speed of the game, the preparation, being in big league ballparks, I think, all very good for him. But just continuing to develop. Again, we'll see how it all shakes out, but he's definitely a part of the solution."