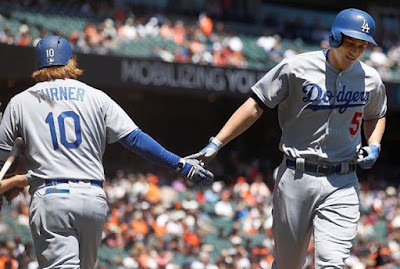 Corey Seager knows how to celebrate his birthday with style. Yesterday afternoon against the Giants, on his 23rd birthday, he launched his fifth home run of the young season in the first inning of the game. The knock is the 19th time in Dodger history that a player hit a round-tripper on his birthday, and the first time it's been done since Matt Kemp in 2014. As for the rest of the game, Julio Urias was impressive in his first outing of the year and the Dodgers offense finally rallied to win the game in the 10th inning. Per Chris Haft and Ken Gurnick at MLB.com:

"The way that we've sort of been inconsistent with the different facets of the game and to be one game under .500, I think we're in a good place," said Dodgers manager Dave Roberts. "This was a hard-fought series. They celebrated their wins over us and to be two games down in the loss column and salvage a split, to see the life we had in the last inning, this was a big win for us."

Photo above via Justin Turner on twitter. Below are more links to check out:

“I think in some ways the yips probably came about a little bit because he’s so thoughtful,’’ Hershiser said of McCarthy. “What we do on the mound sometimes is a little bit more unconscious than it is conscious. You’re just thinking too much and it gets in the way of what you can do naturally as an athlete.’’

“Mom turns 95 in July, and this is her birthday present,” Sharon Robinson said about her mother, Rachel. “This is what she wanted for his legacy, to show that struggle is a process. We knew him in the family not as a baseball player, but as an activist.”