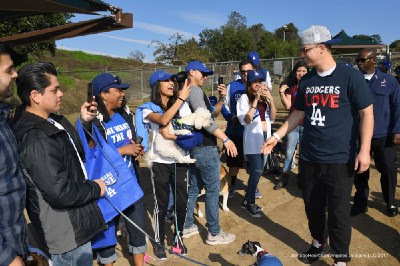 After a brief rain delay Joc Pederson finally had the opportunity to meet with throngs of Dodger fans with their dogs at the Silverlake Dog Park yesterday.  It was a part of the week-long Dodgers Love L.A. Community Tour that concludes today.

Photo above via Jon SooHoo/LA Dodgers 2017.  Go here to check out more pics by Jon and Juan Ocampo from yesterdays Dodgers Love L.A. Community Tour.  Below are more links to check out:

The Dodgers’ group of non-roster invitees to Major League Spring Training includes three of their top position-player prospects, a 2016 hero and 10 players who weren’t in the organization last year.

"The way we have him evaluated and his proximity to the big leagues, it was an opportunity we felt we couldn't pass up as an organization," Rays general manager Erik Neander said.
...
"Adding Jose where he's at certainly deepens our starting pitching depth. That's very important as we try to have success in 2017 and into the future,'' Neander said.