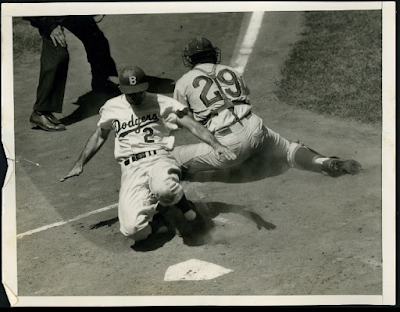 Dodgers third baseman Randy Jackson is seen scoring on an inside-the-park home run in the above August 11, 1956 International News press photo taken by Herb Scharfman - a noted Sports Illustrated photographer.  (eBay Auction Link) It was recorded against the Phillies at Ebbets Park and represent the fourth run to cross that plate that inning.  Per the descriptor on the reverse:

The First inning of the Dodger-Phillies game at Ebbets Field today was distinguished by an inside-the-park homer by Randy Jackson of the Dodgers.  It was one of those "almost lost" things as Richie Ashburn, Phillies centerfielder, "almost" got it.  The photo on the left shows (not seen above) Ashburn making his try as the ball hit the centerfield wall.  The photo on the right shows (photo above) Jackson hitting the plate to score on the clout.

The Dodgers would win the game, 5-2, and it would provide Don Newcombe with his 18th win of the season.  He would record 27 victories that year and win both the Cy Young and MVP.  Below are more links to check out:

Fortunate to say I am safe and so is my family. In a very dark January afternoon. God works in mysterious ways. I thank him for putting us in the right spot at the right time. 5 minutes later and one terminal down idk where I would be right now... My condolences go out to all the victims families whose lives have changed forever.

California State Assemblyman Jimmy Gomez introduced a resolution to rename a portion of the 110 Freeway the "Vin Scully Highway."

The portion in question would cover a 2-mile stretch between the 5 and the 101 freeways.

The resolution also asks Caltrans to determine how much it would cost to install signs with the proposed name.

Smith is considered a plus defensive catcher with elite athleticism for the position and a reputation as an excellent pitch framer. Smith establishes a low crouch and wastes little motion framing, giving umpires a clear look at the plate. He’s more quick release than arm strength, but still posted a combined caught stealing rate of 41%. There’s little question that Smith will be a capable defensive catcher at the big league level.