With the new year upon us it is now time to share my picks for the ten best Dodgers' cards of 2016.  As you know, this is the fifth consecutive year I've put this together.  Check out my past list in the below links:

Elliptic’s solution to keep track of …
Beautiful Celebrity Couple Pics
Today I am thinking about who I am wr…
AMERICA ADDICTED - Johnson & Johnson …
JERSEY WRITERS SOCIAL GROUP: AUTHOR …
For this list I've tried stayed away from the glitzy and super-rare relic and autographed cards, and stuck to the more common and easily achievable base and insert cards found in packs.  There are some exceptions, of course, including some online exclusive cards.  Furthermore, at the very bottom I included some "Honorable Mentions" that barely missed the cut.

I begin this list by making note of an minor league insert card found in packs of Topps 2016 Pro Debut Baseball.  It is from the "Promo Night Uniform" insert set and it celebrates Hawaiian Shirt Night held by the Ogden Raptors -- a Dodgers Rookie League Affiliate.  As a man who has more of these shirts than I care to count I couldn't help but be drawn to this card. 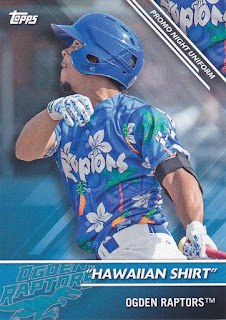 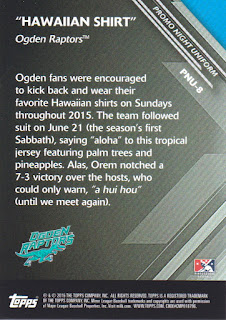 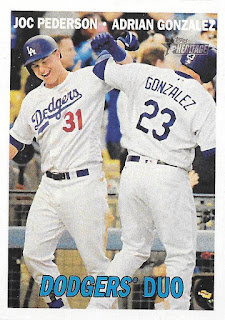 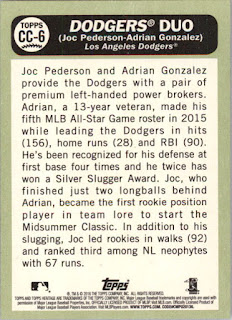 I now include, for the very first time, an online exclusive card available directly from Topps on my list of ten best.  It is from one of those "Throwback Thursday" offerings and it includes cards for both Clayton Kershaw and Kenta Maeda on an design used by Topps for their Star Wars stickers cards produced in the late-70's.  With Star Wars still the rage after all these years I couldn't help but add these to my list. 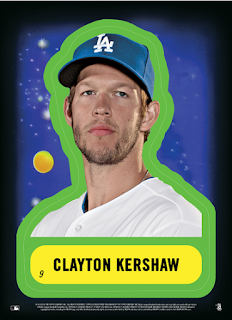 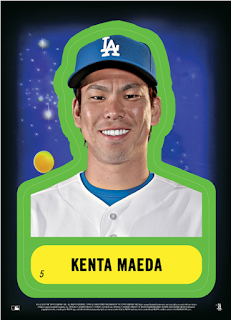 Here is another celebration card for the top ten list.  Below is Andre Ethier in an Superstar Celebrations insert card found in packs of Topps 2016 Opening Day set.  He had hit a two-run walk-off home run off of Angels pitcher Drew Rucinski in early August 2015, and Topps saw fit to commemorate the occasion.  You can watch a highlight of it here. 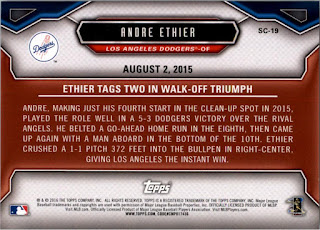 Here is the second online exclusive card on my list of ten best.  Below is the Jackie Robinson card from Jackie Robinson Day that was made available through the Topps Now program.  Only 759 cards were made.
2016 Topps Now
#15 Jackie Robinson
Breaks Color Barrier 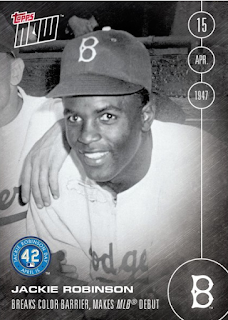 Who could forget Kenta Maeda's dinger in only his second Major League at-bat?

It was a glorious moment for fan and Dodger players alike. Thankfully, Topps created the below Topps Now card to remind us of this event.  Go here for an highlight video of it.

I've also included the Topps Update card they created later in the season since it celebrates the same moment.

Hugs and kisses all around.  Topps Stadium Club brand is noteworthy for using fantastic  photography, and the below card is an example of that.  Featured is an exuberant AJ Ellis hugging the heck out of Clayton Kershaw. 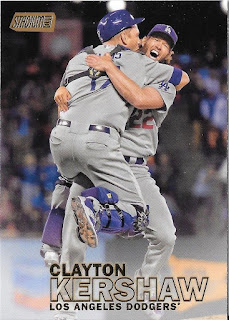 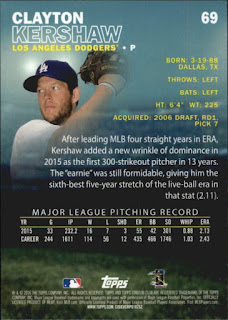 I loved Adrian Beltre as a Dodger, and I still to this day hate that he no longer wears blue.  So, seeing Adrian in Blue on cardboard always makes me smile.  Some of my fondest memories of his time in Los Angeles were his amazing defensive plays, so this card below really stuck out to me.    Featured is Beltre's Topps 2016 Legacies "Vault Metals" insert card of him diving in the stands to catch a foul. 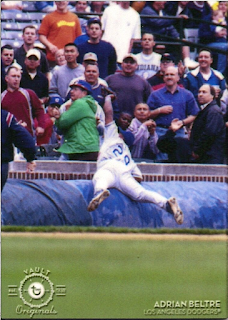 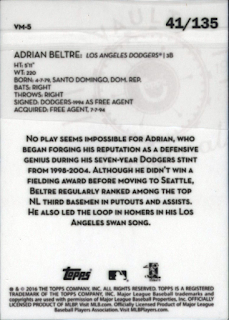 If not for Vin Scully this card of AJ Ellis would have easily been my favorite card of the year.  It celebrates AJ Ellis' first career stolen base.  Unfortunately, I couldn't find a video highlight of it, but I did find comments about the steal said by manager Dave Roberts after the game.  Watch that here.
2016 Topps Now
#290 AJ Ellis 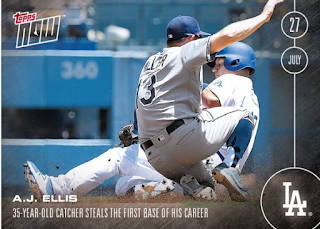 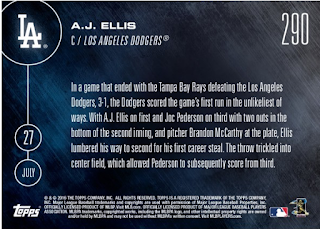 For Vin Scully I broke my rule about not including super-rare and expensive cards in my list of ten best.  Featured below are all three of the Scully autographed cards available to fans this past season.  As you can imagine, it will cost you a pretty penny to add any of these to your collection. 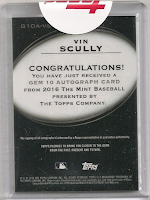 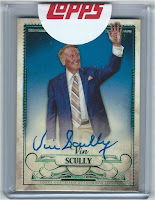 One of the great traditions that has sprung up around Jackie Robinson Day has been the use of Jackie's number by every player on the field that day.  It's an awesome sight, and the below three Dodger' who are wearing #42 was great to see. 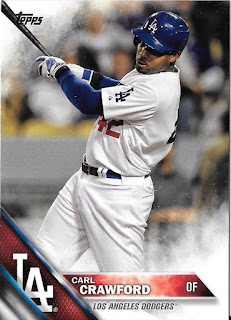 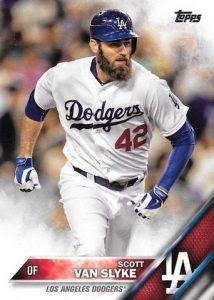 Speaking of Jackie Robinson, below is a commemorative Robinson card highlighting his first game in Chicago. 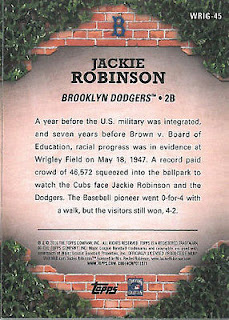