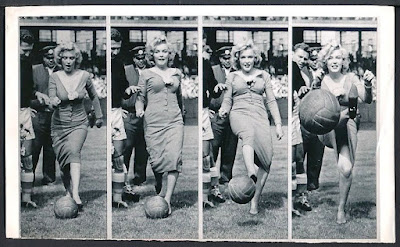 I realize that the photo above has nothing to do with Baseball or even specifically the Dodgers, but it was taken at Ebbets Field in Brooklyn.  Featured above is an in-action composite photograph of an vivacious and energetic Marilyn Monroe kicking a soccer ball to open an international friendly between the Israeli team and an American All-Star squad, dated May 13, 1957.  (Auction Link Here)  As you can see in the AP press wire photo, Marilyn strikes the ball with all the gusto of a pro.  BTW, this photo recently sold on eBay for $412.00.  Wow!

“It was a great experience,” Teixeira said in a phone interview Saturday. “I’m still shocked by it.”

Oaks took his under-the-radar progression in stride and maintained a positive attitude while most of the focus and attention was elsewhere within the Dodgers organization.

“I feel like there’s a lot of buzz around people sometimes and your job is to go out there and pitch. So that’s what I do and I just try to be as efficient as I can,” said Oaks. “I’m not going to throw a hundred miles an hour but I’m going to get my team to seven or eight innings every time and get you a W.”

"With the new CBA [Collective Bargaining Agreement] and everyone limited as to how much you can spend there [on players], we think the competitive edge is in facilities, instruction and training," said Dodgers president and CEO Stan Kasten. "We are going all-in on the best, state-of-the-art complex."