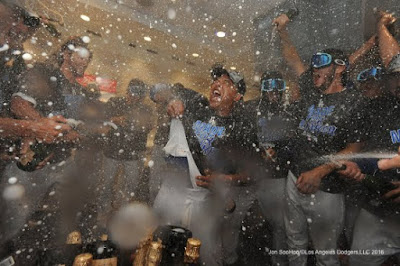 The Dodgers sure do have a flare for the dramatic. 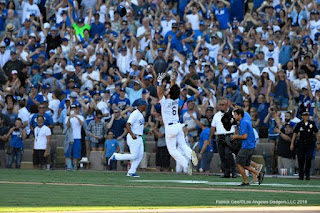 On an afternoon that would mark Vin Scully's last home broadcast and Fan Appreciation Day the Dodgers did the unthinkable.  Not only did they capture their fourth straight National League Division Championship, a first in franchise history, they also did it with a 10th inning walk-off home run by a journeyman infielder.

In some ways, the way in which the team took the title yesterday is reminiscent of who this team is.  They are a group of men all moving together in the right direction.  Some of them are superstars, while others are the gritty pieces necessary to last an entire 162-game schedule, but they all know that they need to play their part in order to take home the grandest prize in the league.  Considering how tough it is for a team to compete when experiencing a high number of injuries like the Dodgers have had, it should shock the system that the team has gotten this far.  By rights, this season should have been a wash.  We should not be where we are.

Alas, though, here we are.  The Dodgers are the Western Division Champions, and I couldn't be more elated.

The photos above via Jon SooHoo/LA Dodgers 2016.  Go here to see a whole bunch of great photos from both yesterday's game and the ensuing celebration.  BTW, I am planning an encompassing post featuring a rundown of Vin Scully Weekend related links, so stay tuned.  Below are more links to check out:

"He was a very, very close friend of mine," Puig said in the Dodgers clubhouse before their potential division-clinching game against Colorado.

"He was one of the first people I [knew] here, and I was thinking just a couple of weeks ago we were having dinner in Miami: He was a very good guy and I also liked the way he played baseball, the way he treated his mom, his grandma, his teammates and other ballplayers like myself."
...
"He would give me advice about how to better myself, and now I lost him," he said.

“I’m floating right now,” Culberson said. “It’s awesome. I couldn’t have written it up any better.”

One of my favorite things about baseball is how Clayton Kershaw has never been able to master a changeup. There’s absolutely no one in baseball who needs a changeup less than Clayton Kershaw, but, drive is drive. He’s been frustrated by his own lack of progress, because as far as he’s concerned, he’ll forever see room for improvement. He still has an ERA. Runs are mistakes.

"I really think the turning point was a couple days after Kersh went down," said Zaidi. "You lose the best player in the game, you're going to spend some time feeling sorry for yourself. And then it's how you move on from that moment. Make no mistake, having him back these past few weeks has been a huge boost too."

“I was a senior and he was a junior,” Miggins recalled. “We had an assembly for some reason and he ended up sitting right behind me. He grabbed me by the shoulder and said, ‘Larry, you’re going to be in the big leagues and the first time you hit a home run, I’m going to be the announcer to tell the world about it.’ Can you imagine that? He’s 15 years old. I’ll be damned if it didn’t happen.”