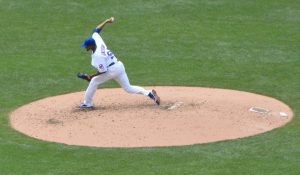 Edwin Jackson
The San Diego Padres’ Edwin Jackson took a no-hitter into the sixth inning Wednesday night before giving up a leadoff single to Jordy Mercer. It marked the franchise’s 7,603rd game without a no-hitter.

Jackson reached the 7th inning with a no-hitter intact in his first start for San Diego, his 11th major league team, on Sunday, July 17, 2016.

In that game, the San Francisco Giants’ Conor Gillaspie tagged jackson three-run homer to right with one out in the 7th inning. The Padres held on to win 4-3.