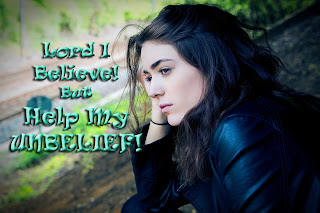 There are certain things that we're all hoping and believing for but sometimes life make it extremely difficult to hold on to that belief.  Circumstances and situations have a way of shaking that belief, diminishing the level of belief or just wiping it out altogether.  I'm believing God for some cray big things but right now I'm not seeing the manifestations of any of it.

For the most part I'm fine with waiting and trusting that it will come, but in some things  I feel like it's almost impossible or I'm like gees can it happen already.. I've been waiting x # of years/months and nothing!!  Don't get me wrong, I have crazy big outrageous faith to trust and believe God for the impossible or pretty close to it, but I'm still human. Being in this fleshly body my impatience sometimes gets the best of me.

In Mark 9 there's a story of a man whose son had plagued by a deaf & dumb spirit since childhood.  The spirit would throw him down, cause him to have seizures, foam at the mouth and become rigid.  The man went to Jesus to heal his son.

Jesus said to him, “If you can believe, all things are possible to him who believes.”
Immediately the father of the child cried out and said with tears, “Lord, I believe; help my unbelief!”

The man believed, but knew he still had some areas of unbelief.  Sometimes we say we believe and we have every earnest desire in our hearts to do so but the Flesh won't let us.  The spirit is willing but the flesh is weak.  It wasn't because the man doubted Jesus' ability, his flesh was just weak.  Flesh will never allow us to fully believe in the supernatural abilities and promises of God.  It's our spirit that sees and awaits the manifestation.

This old wretched flesh is impatient, bored, weary, temperamental, unruly and wants instant gratification in everything.  The good thing is, God said we can ask anything and believe and it would be ours. So if we ask Him to help our unbelief and believe that He will, then it's done!  That's just how good God is!  Even when we can't fully grasp belief, He steps in to help us wait for the things He's promised.  If you're waiting and your belief is wavering or your patience is growing thin, ask God to help your unbelief.!  Check out my #Saturdayscope from today...