An Ancient Monkey Kingdom & birthplace of a Monkey God

Exhibit D: Lipstick and rifles--Ukra…
Window Shopping in Historic Downtown …
كيف نتعلم فن الطهي المصري وأسراره
Download करे Free में PDF NCRT बुक की…
Online Brokerage Firm’s Suggestion on…
dates back to over 5000 years – way older than the ancient Hampi itself! The plateau is said to be the oldest on the planet, over 3000 million years and counting. 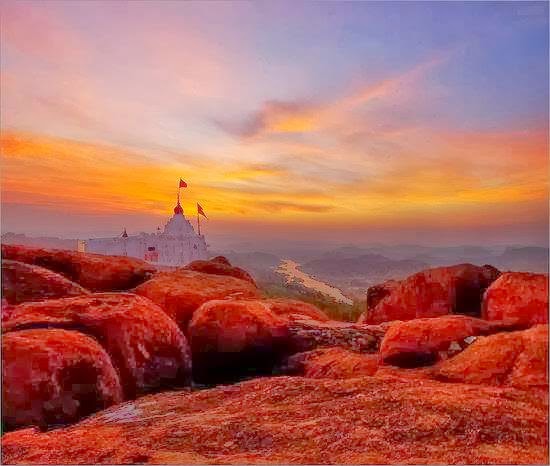 Photo: Krishnadevaraya
The Grand Seduction
Anegundi may seem like a tiny, unassuming village, but it has all the  trappings of a grand seduction of an entirely new kind. A beautiful river, coracles floating on its waters and past ancient ruins, electrifying green fields,  gentle hills, and the most distinctive of all – the freaky, outer-space-like boulders that are generously sprinkled all over the landscape. 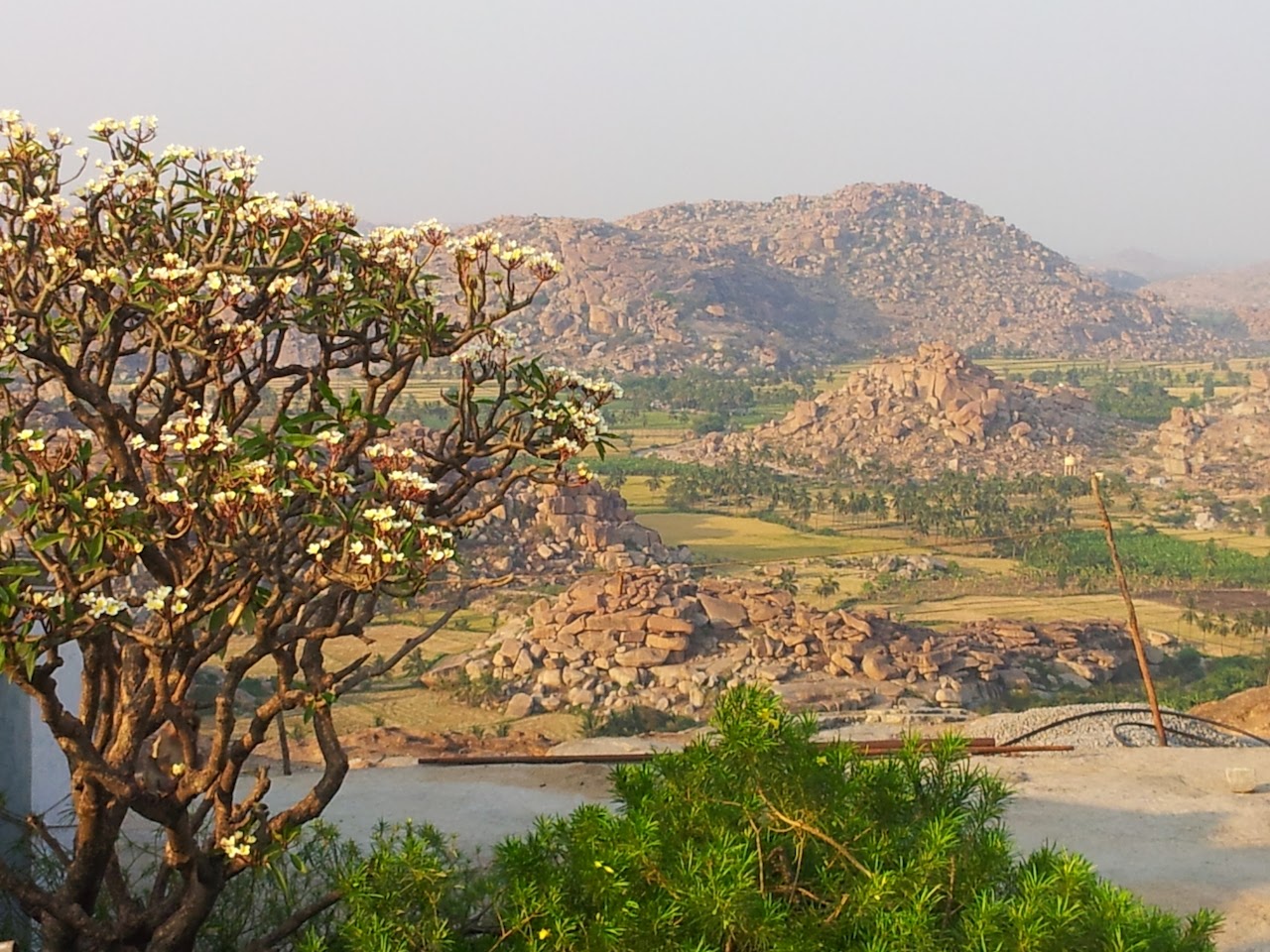 Photo: Bindiya Murgai
A true throwback in time, Anegundi has no dearth of mythological treasures, as it was the cradle of the Krishnadevaraya dynasty, of the glorious Vijayanagar empire. The current generation Krishnadevaraya still lives here and is actively involved in numerous ecological and sustainability projects. 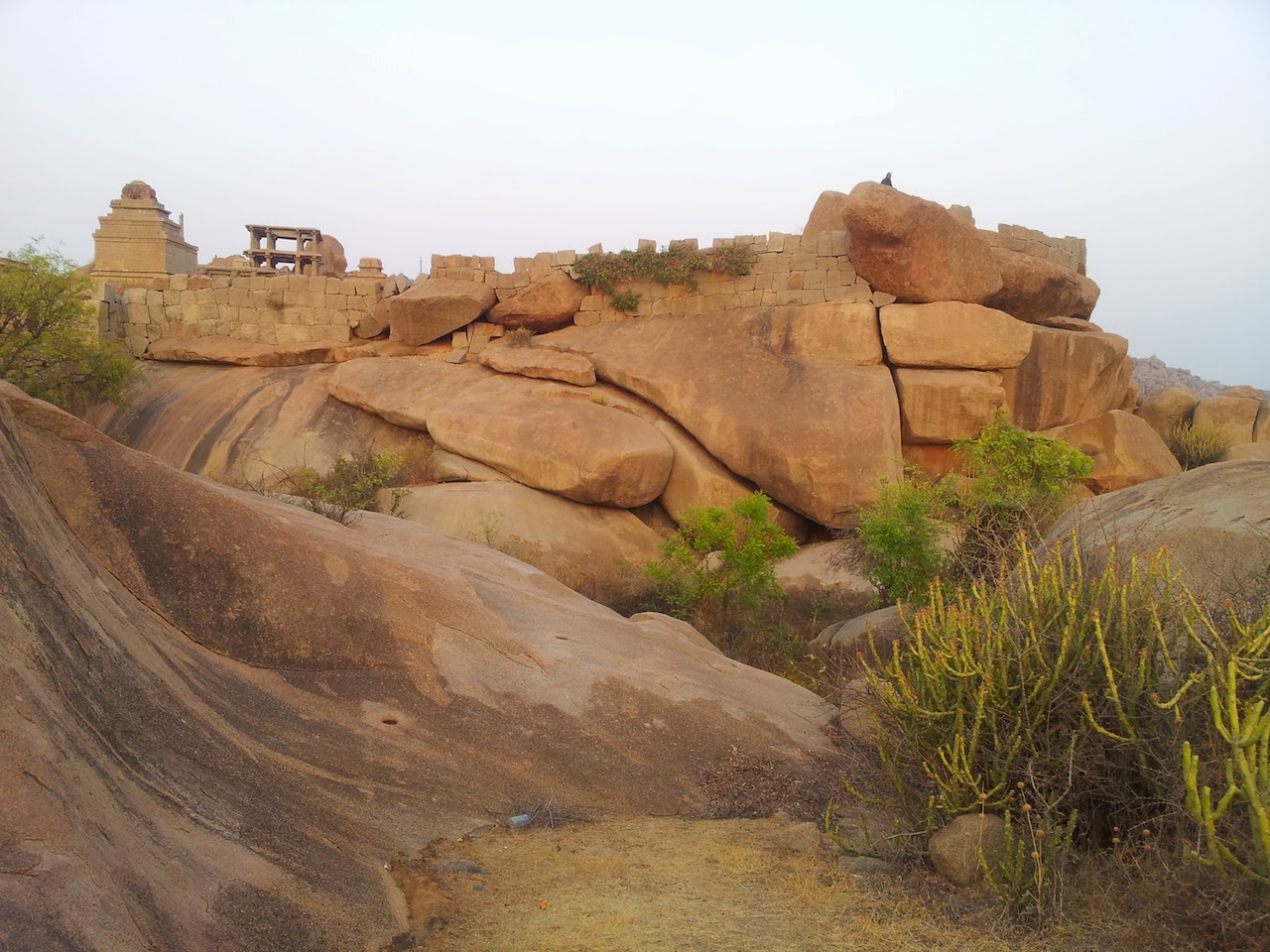 Photo: Bindiya Murgai
Kingdom of Monkey Princes & Gods
According to the grand Indian epic, Ramayana, Anegundi (formerly known as Kishkinda) was the Kingdom of the monkey Prince #Sugriva.  But it was his brother #Hanuman who got all the glory and emerged as the local superhero and later, a major God for #Hindus. Their allegiance and support to #Rama (the hero) is what lead to the grand action packed, and literally fiery climax if the #Ramayana. 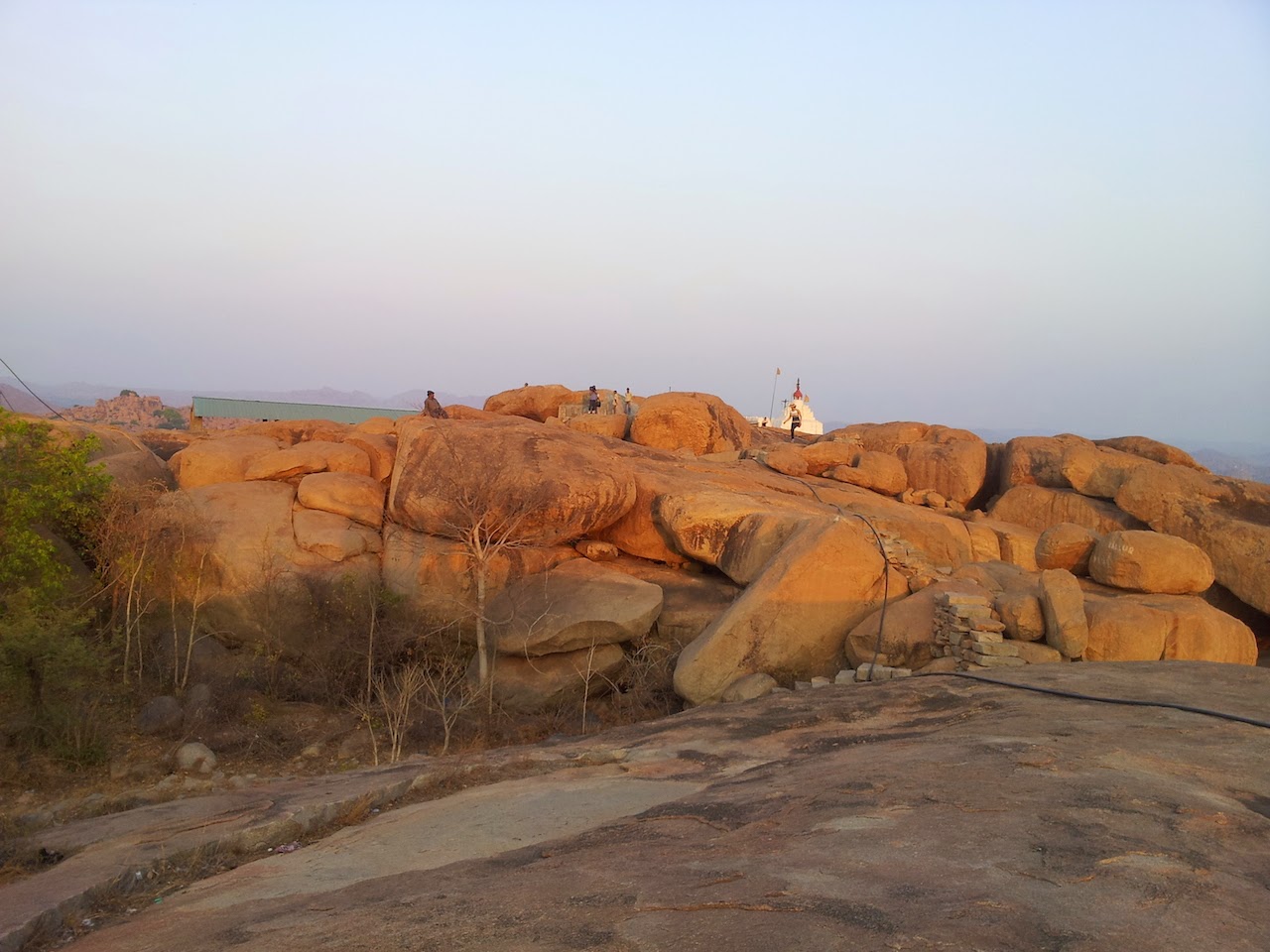 Photo: Bindiya Murgai
Here’s what happened in a tiny nutshell. Rama’s wife Sita (the heroine) had been kidnapped by the Ravana, King of Lanka ( the villan). Hanuman and his monkey army helped build a bridge across the ocean, to Lanka.  This enabled Rama’s army and the monkey military to cross over and defeat #Ravana. All of Lanka was burnt to cinder thanks to the cunning strategy of Rama, Laxman (Rama’s brother & sidekick), Hanuman and their men. They finally managed to rescue #Sita, the princess and wife-in-distress. 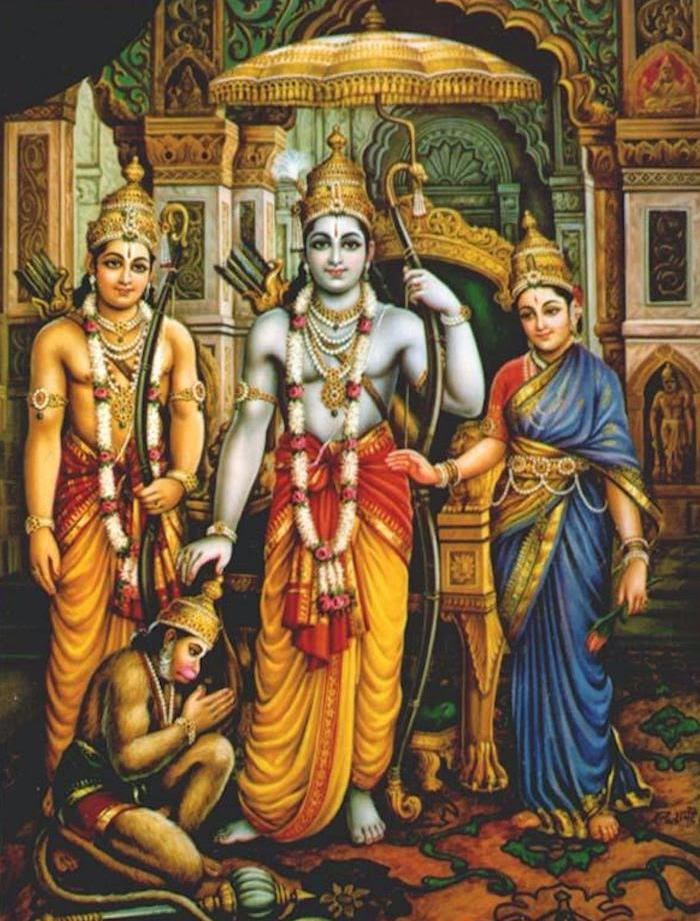 This great cross-border “rescue mission” aside, Hanuman also performed awe-inspiring feats like changing form, flying, and carrying an entire mountain that bore a life-saving herb, in order to save Laxman’s life. And all this from the extreme southern tip of the Indian subcontinent, to the Himalayas in the extreme north, and back!  All this won him a coveted place in the Rama’s family drama, and he soon became a permanent character in their family portrait, featuring Rama, Sita and Laxman – with Hanuman bowing down to them on one side as a respectful ideal devotee (usually on his knees).
Top Devotee turns solo Divine Act
With time though, this Monkey God got his due and managed to transcend from Top Devotee to solo Divine Act.  Countless temples are dedicated to him, and he’s even assigned a day in the week for his worship. The day being Tuesday. 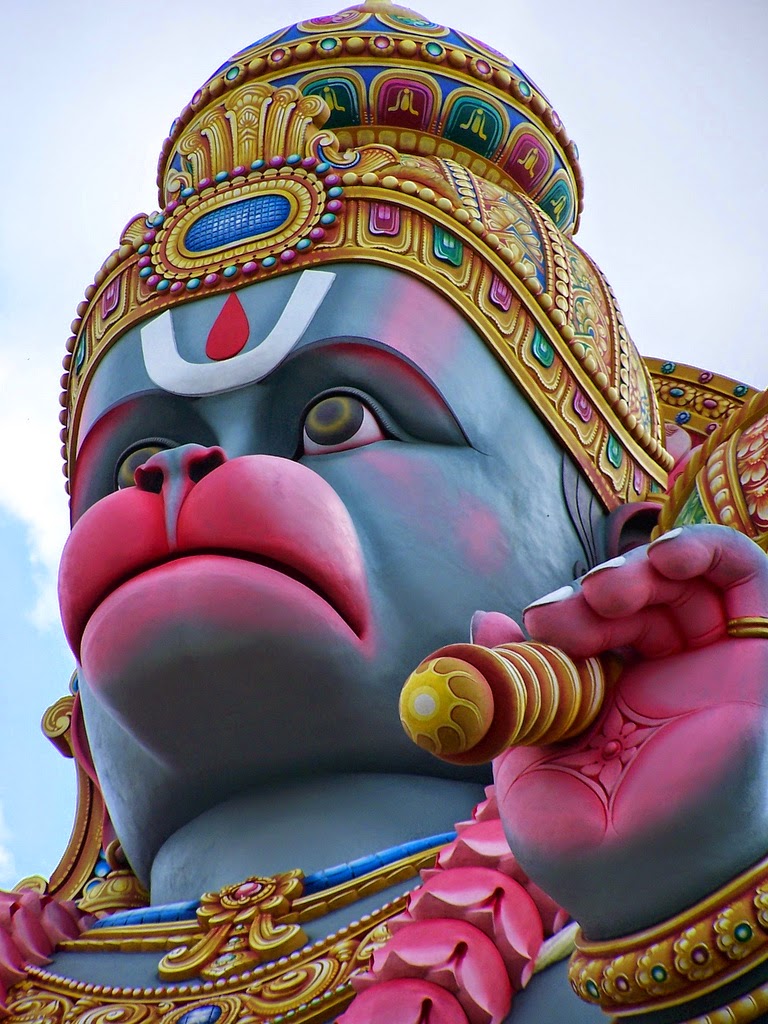 Photo: Ramki Photography
Almost all depictions of Hanuman show him carrying his mace in one hand and the mountain in the other. This show of strongmanship made him the favored God for wrestlers and all others in need of some extra strength and muscle.  But that’s not all. Synonymous with alpha manhood (although himself  celibate), people also pray to Hanuman for familial happiness and to bear a son -- which in many parts of India is considered one of the same thing. Many worship him for protection from the very ill tempered, wrathful Lord of Planet Mars, called Mangal. Whatever the reason for worship, he remains wildly popular and it’s little wonder that the temple made at his supposed birthplace is a very important pilgrimage spot in Anegundi.
Anjanadri Hill: Birthpalce of Hanuman, The Monkey God
Hanuman’s paternity is somewhat complex and perhaps, disputed. Some verions claim he’s the son of Vayu, the Wind God. While others claim he’s an incarnation of Lord Shiva himself. What we know for sure is that his mother was Anjana or Anjanari. Like with most myths, there’s also a squabble over his birthplace, with enthusiastic claims coming from some other states too. It does seem natural for a monkey superhero to be born in a Monkey Kingdom though, and by that logic, this place seems right. 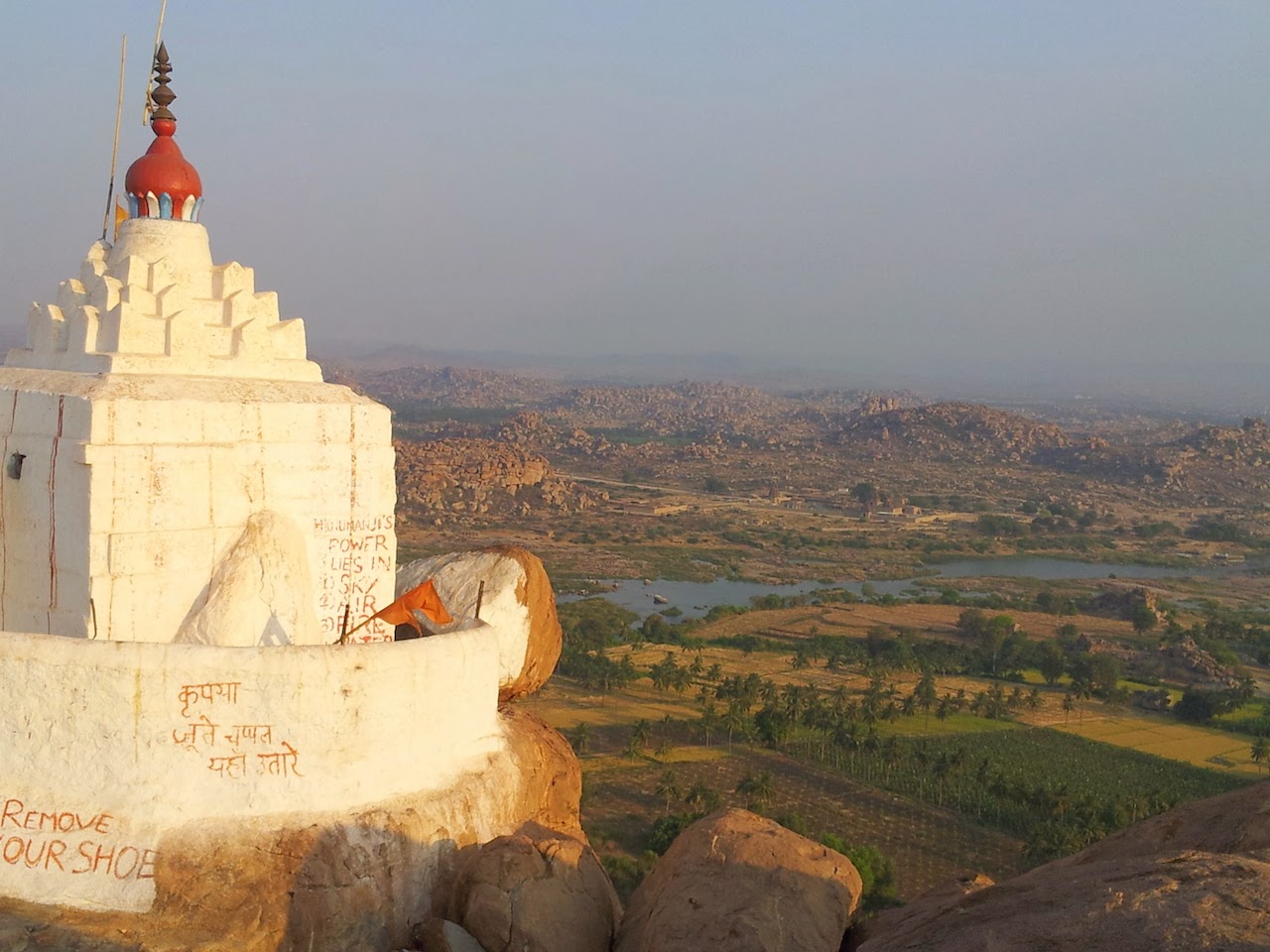 Photo: Bindiya Murgai
Fact or fiction, Anjanadri Hill is either named after his mother or his alias, Anjaneya.  A tiny, modest whitewashed temple stands there, marking his birthplace.  It is a huge contrast from all the other important Hindu temples and it is believed that the structure has been here since the time of the Ramayana.
One has to take a 570 step climb to reach the top.  Devotees of all ages make their way up to seek blessings, and much like the ancient times, an army of monkeys hovers all around the place. Only difference being that the modern day avatar is an army of rouge monkeys, who don’t hesitate to snatch anything they like from the devotees or tourists. Top favorites remain food and beverages, but they may also take a fancy to anything else, so be careful. Photo: Bindiya Murgai
The most breathtaking sunrise and sunsets
Apart from the temple, the climb is a must-do as the top of the hill offers the most spectacular views of  Anegundi and Hampi. A sunrise or a sunset spent here will count as a stand-out moment of your trip. The sunset view point is where a motley crew of characters congregate – hippies, yogis, chillum bearing babas, a local “monkey-man” who displays his jumping skills, an odd musician, photographers and bric-a-bac of others. 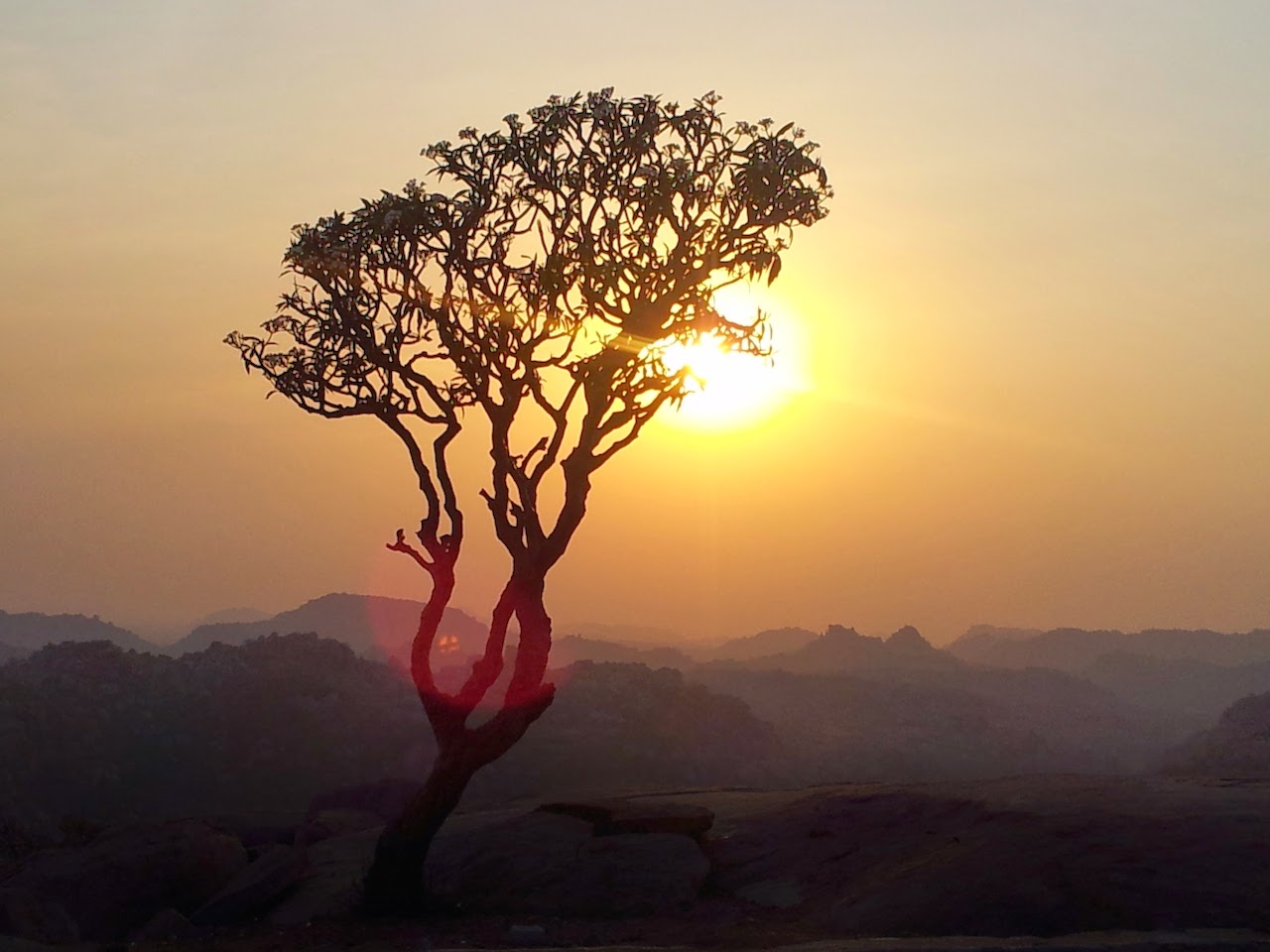 Photo: Bindiya Murgai
Handy Tips:
1. Carry a stick from the start of the climb, and keep it till you return. Just use it to scare the monkeys, not hit them, or you may face the wrath of other devotees, or even worse, the monkeys themselves!
2. Do not feed the monkeys, even if others are
3. Never look them in the eye…they take it as a direct challenge
4. Don’t go too near to take a picture or shake hands etc. You may land up bruised and bitten
5. Wear comfy footwear, that you don’t mind losing. You will have to remove it once you reach the top and stuff does get lost in the pile sometimes
6. Carry water as you will not get any at the top
7. The rocks get really hot by evening and walking barefoot can be quite a challenge. Take a pair of thick cotton socks, or take a small bag for your footwear. Pack it in while crossing the temple and then wear it once you are on the other side.
8. Leave once the sun is down and resist any temptation to stay back. It is not safe.
9. Once you are down (try to walk down while others are still around), have a fresh coconut water before heading out.
All content and image Copyrights Reserved by Bindiya Murgai & Soul Sherpa

An Ancient Monkey Kingdom & birthplace of a Monkey God