The 1980s was the Best Decade for Horror Movies

Were the 1980s the Best Decade for Horror Movies?

Without a doubt, the 1980s was the decade that created the best horror movies ever. Yes, I am biased here because I believe the 80s was the greatest decade for film and music. Still, there is no denying that the 1980s produced many memorable slashers, supernatural, comedy, psychological thriller-horror flicks, and cult classics bar none.

The Golden Age of 1980s Horror Movies had it all; sexy women, terrifying villains, interesting settings, and classic characters. Of all the Movie genres, horror movies attract sensation-seeking viewers who love to be frightened while eating popcorn on their couch or in the movie theater.

In the 80s, horror movies were relatively inexpensive to make and easy to write. Because of this, everyone tried to cash in on the 1980s slasher craze.

(I added some Amazon affiliate links in this post.)

The first horror movie I watched was the Original Friday, the 13th movie. I didn’t watch it when it first premiered at the movies; however, I watched it when it was shown on cable television in the early 1980s.

I was born in the 70s, but culturally, I was raised in the 80s. I was there when MTV first premiered on cable television; I watched when Michael Jackson’s Thriller video was first aired. The 80s had so many great flicks that I could create an entire website about it. Back then, I wore parachute pants, went roller skating on Friday and Saturday nights, learned how to breakdance, and rolled my pants up.

Also, I loved to rent VHS tapes at the video store on the weekend. In the 80s, it was quite common to have a video store in your neighborhood. These weren’t franchises like Blockbuster or Erol’s; these were quaint, no-frills video stores with hundreds of movies in all categories.

It usually took me an hour to choose my horror movies. I always chose the movie based on the cover of the VHS tape box and the movie’s plot.

Even the commercials in the 80s were great and memorable. I still remember the original Polly-O-String Cheese commercial, “Hey Jimmy, Give me a cheese wid Nuttin,” “Nuttin?” LOL!!!

What made the 1980s horror films so great?

Stay off the Moors

One of the best horror moments ever on film is the beginning of An American Werewolf in London. Two American Backpackers enter into The Slaughtered Lamb, a small Tavern outside of London. The locals kindly remind the Americans to stick to the road and stay off the Moors.

Moors or Moorlands are a reference to uncultivated stretches of land in England.

Next, the American backpackers leave The Slaughtered Lamb and are busy chatting with each other while walking when they discover they have wandered off the main road and are walking in the foggy moors. What they hear next is a sound so creepy and scary it is memorable.

Not only horror movies, but most movies, in general, these days are plain, unoriginal, and have lousy casting for characters. The last great film I watched was Prometheus in 2012 at the movie theater. So that says something.

One of my favorite horror movies post-1980s was Scream. The movie had all the elements for a classic horror flick. Scream started off with a bang with the opening dialog scene with Drew Barrymore and Ghostface. Plus, Scream had so many likable characters, especially Randy Meeks, played by actor Jamie Kennedy when he brilliantly explains how horror movies work to his friends.

Also, who could forget Officer Dewey Riley, played by David Arquette. Plus, Scream has one of my favorite childhood actors Henry Winkler whom I hope to meet someday at a Horror Convention. 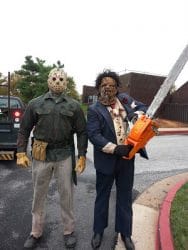 There are too many horror movies from the 80s that I love. Here is a list of some of my all-time favorites. I have Amazon TV, and Prime movies offer me tons of free 80s horror flick classics. As I said, the 1980s horror movies’ characters helped to get the movies over with the fans. With modern horror movies, the characters are so unlikeable. I look forward to seeing them get killed off.

I love Comedy Horror Movies. A few years ago, I watched a great one – Tucker and Dale vs. Evil. Whoever made this film, please make another one! It was classic.

Some of my favorite 80s Comedy Horror movies are:

What I Enjoy About Horror Movies

A great horror movie does not need to showcase blood and guts to work. It’s not even necessary. One of my favorite modern horror movies is the 2010 film Insidious. I thought the first one was well done because it had suspense and a supernatural connection, which is always scary.

Also, who could forget the unsettling scene when the ghost boy is dancing and running through the house while Tiny Tim’s Tiptoe Through the Tulips was playing.

Another thing a good horror movie needs is location. I love horror movies that are set in an attractive outdoor setting. Whenever I read the plot of a horror movie, it states that a group of friends decides to take a weekend trip to the woods, a cabin, mountains, a farm, in New England, or whatever, I will watch for sure.

Last Winter, I departed on a Bigfoot horror movie binge because the setting for all of these movies was in the woods. In all, I must have watched at least a dozen of them.

So, in general, the setting for a movie matters to me as well as great characters. Most 80s horror movies did not cast known actors, which in my opinion is a good thing. A good horror movie relies on creating tension and using imagery to make it work.

Night of the Demons

The 1988 Cult Classic Night of the Demons is one of my favorite 1980s horror movies. First, the location is excellent. The film is about a group of teens who decide to have a Halloween’ party’ in an abandoned funeral parlor. Secondly, all the characters are memorable. My favorite character was the mullet-wearing Stooge, played by Hal Havins. He nails the obnoxious high-school character so well.

Halloween vs. Friday the 13th

The masked killer theme is something they both have in common. The mystery of the emotionless killers behind a mask that hides their real selves makes them appear stoic in their demeanor.

Halloween first debuted in 1978, making it a 70s classic, while Friday the 13th debuted in 1980. They are two years apart, yet they are so similar in many ways.

What both movies have going for them, in addition to badass killers, is the score. If you watch a horror movie with the volume muted, they are not that edgy. However, once you add music, it adds an element of suspense that adds to the scene.

Harry Manfredini created the score for Friday the 13th, and Director John Carpenter created Halloween’s score. I believe the score and the killers for these two movies are what make them horror classics.

So which iconic horror flick do I like better?

I have to go with Friday the 13th.

My favorite Friday the 13th movies go in this order.

I don’t count Friday the 13th movies after part 4 in the same light. To me, every Friday the 13th past part 4 is an alternate turn from the franchise. I wish that Tommy Jarvis did not kill Jason in Part 4. I’m not a fan of Zombie Jason, even though all the actors that played Jason after Part 4 did a great job, especially my Monster-Mania Con friend Kane Hodder.

The best Jason is from part 3, played by Richard Brooker. The make-up in part 3 was perfect. Jason was scary looking but not too deformed-looking. Plus, I think Richard Brooker had the ideal stature for play Jason. He wasn’t too big or small, and his size appeared menacing to me.

Friday the 13th Part 3 is when Jason gets his iconic Hockey Mask. At the beginning of Part 3, Jason doesn’t wear a mask. During the movie’s filming, the producers realized that applying the makeup to Richard Brooker was too time-consuming. Instead, they decided to use a hockey mask that one of the supervisors on set had to save time.

Last Winter, I began writing out an outline for a Friday the 13th Part 4 reboot. Part 4 starts where Part 3 left off. But, Jason does not go to the ‘Jarvis Camp’ in Part 4 Reloaded, and Tommy Jarvis obviously does not kill him.

I also created a back story on Jason, including his drowning and whether he did indeed drown and die. The story’s outline has been on pause for a while, but I will soon pick it back up.

My Favorite 80s B Movies

B Movies are low-budget films with no-name actors. Generally, B Movies do not perform well initially, but many receive a cult following the movie’s theme. When it comes to horror movies, I love B Movies. Most classic 80s Horror Films are B Movies.

The 1980s was the best decade for horror movies, so many modern horror films are set in the 1980s. The funny thing is that horror films were once looked down upon by studio executives. Until once, they realized people actually enjoy being scared, and they could make money in the process.

I believe the 80s was the best decade for horror movies because directors didn’t have the big budgets that movie makers have access to now back then. Directors had to hold an audience by telling an engaging story using creative kills and suspense. 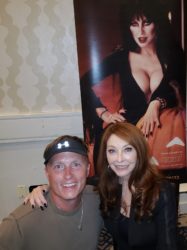 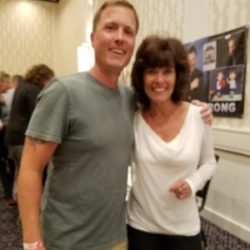 Me with Adrienne Barbeau 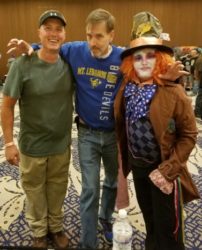 Me and my son with Bill Moseley 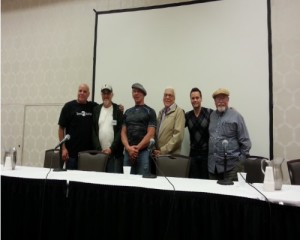 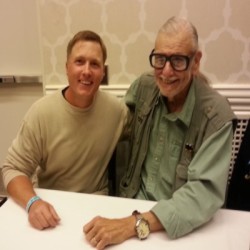 Me with Director George Romero 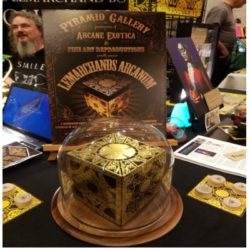 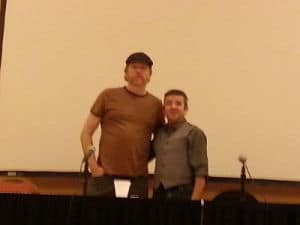 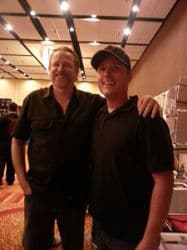 Me with Courtney Gaines 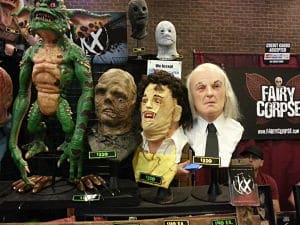 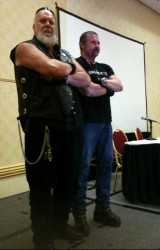 ⇒The Story Of A Cannibal Farmer

The post The 1980s was the Best Decade for Horror Movies appeared first on Mazzastick.

This post first appeared on My Self-Improvement, please read the originial post: here
People also like
The Best Books That Have Inspired Movies
A Furry’s Guide to Cryptocurrency
How to Get Rid of Mice – 5 Methods
“The Friend Who May Not Seem a Friend” – The Cat and the Fire, Post 2 of 3
6 Interesting Places To Hold Your Next Corporate Function
Self Motivation: How to Keep Moving Forward In Your Career or Business
This is the year to buy a gaming TV
Capture Attention and Drive Traffic with Catchy Headlines: 7 Ideas for Blog Titles
When You and Your Best Friend Had an “Accident”
Raam Tamil Movie | Aarariraro Video Song | Jiiva | Saranya | Yuvan Shankar Raja | Star Music India

The 1980s was the Best Decade for Horror Movies