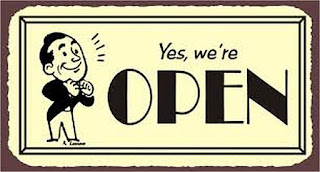 I discovered that the shop had sat on the corner of Scott and King Streets for well over one hundred years. The panes of each simple window had been painted dark hunter green in at least half that amount. They now flaked with time and ill-repair. The canopy, I was sure, was once bright and friendly but now it revealed much fading and decay. Stitches made long ago had unwound allowing for small gaps of direct sunlight to pierce the inner sanctum. It leaked. Each window was tarnished from within. In places, the stain was so thick you could not see the display set up inside. The entrance, also caked with brittle disguise, met a cracked Frame and compromised base set in the same colour scheme. The Door was thick and heavy, bearing an old skeleton key lock and mail slot just beneath a sheet of beveled glass. Tiny white lilies and roses and hummingbirds danced around the edges like a ghostly scene. Dead centre, resting on the glass, the 'Yes, We're Open' sign welcomes inquiring minds. The post a jovial welcome indeed. Its standard appeal hidden just behind more camouflage. From a distance the place still holds a quaint appeal, but on careful study you could not help but wonder if it had been abandoned long ago. Looks can be deceiving.