What is Google Duo and Why Will I Like it?

For those of you looking for a simplified way to video chat with your friends and family or just some fellow geeks out there, Google has a new cross platform app that might just be the answer. Announced yesterday, Google Duo is an app similar to FaceTime and Facebook Messenger, offering users a simple 1-to-1 video calling app that, unlike Apple's FaceTime, is available on both Android and iOS.

Africa to be the “Game Changer” of th…
Little Net Big Net
How to Become a Successful Affiliate …
Beautiful Celebrity Couple Pics
300 million people around the world h…
Why you'll love Duo! It is all about simplicity!

For Duo Google kept to the geek mantra of K.I.S.S. (keep it simple stupid). They designed the app to be dead simple for anyone to use. So you get a no-frills app, that doesn't feature a ton of extra, but connects you directly to that one person you want to reach out to. There's barely any UI or features to speak of. But from a technology standpoint, it's meant to work for with just about any smartphone. Making it ideal for families to connect across a variety of devices and at a variety of tech levels.

Google also designed Duo to work across a variety of network connections.. The app is built to provide HD video when on good networks and to gracefully and seamless adjust quality if things get worse. You can even drop down to a 2G connection and have video pause but have the audio continue. For video calls on the go, Duo will switch between Wi-Fi and cellular data automatically without dropping your call. You can start your call at home, and continue seamlessly even when you head out the door.

The simply design also means that Google had to simplify other things like how you log-in and connect to others. To do so, they did away with needing to connect to any external accounts. That means you simply sign into the Duo app with your phone number (no Google login needed here), and you'll see your full list of contacts; if people in your phonebook don't have the app, you can tap their number to send an SMS and invite them to Duo.

Once both of you are up and running you'll see what your front-facing camera sees. Below that are a handful of circular icons representing your most recent calls in the lower third of the screen. You can drag that icon list up and scroll through through and tap the person you wish to connect with. 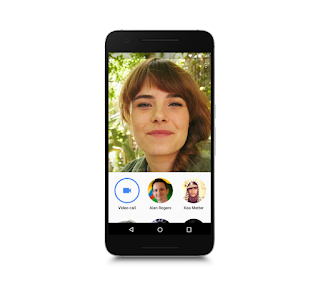 For those who do have Duo, tapping their number initiates a video call. Once you're on the call, you just see the person you're talking to, with your video feed in a small circle, not unlike Apple's FaceTime. Tapping the screen reveals the only UI elements: a hang up button, mute button and a way to flip between the front and back cameras. 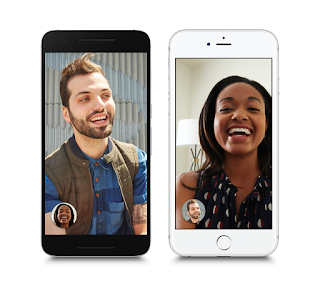 To add a little more 'human' experience and to give users a better sense of who they are connecting with Google included a feature it is calling Knock Knock. If you're using an Android phone and someone calls, you'll see a preview of their video feed on the lock screen. The person calling can wave or gesture or make a silly face to try and draw you into the conversation.

Google says this new features makes the person on the receiving end a lot more likely to answer with a smile rather than a look of confusion as they wonder if they video is working properly. For the sake of privacy, you'll only see a video feed from people in your contacts list, and you can turn the feature off entirely if you prefer.

Duo is available in the US for both Android and iOS today, and Google says it will be live worldwide in the next few days.

What is Google Duo and Why Will I Like it?