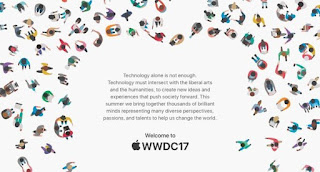 Apple has officially announced that its WWDC 2017 will take place between June 5th and 9th at the McEnery Convention Center in San Jose, California. The 2017 Keynote will be taking place on June 5th at 10:00 am Pacific Time with expected announcements related to the new iOS 11 for the iPhone, iPad and iPod Touch and macOS 11 for the Mac. Rumors also suggest we may hear about new hardware ranging from the new iPhone 8 to iPad Pros and maybe even a Siri home device.

Don't hold your breathe on getting tickets however, because as usual they are already gone!  Tickets, which were priced at $1,599, were distributed by random selection at the end of March, and free tickets provided to scholarship winners were handed out in April.

The official WWDC invite to developers said "Technology alone is not enough. Technology must intersect with the liberal arts and the humanities, to create new ideas and experiences that push society forward. This summer we bring together thousands of brilliant minds representing many diverse perspectives, passions, and talents to help us change the world."

Apple typically uses their invites to tease some of the undertones of the event. In this case we could be seeing a major push towards a more interactive technology with more VR or augmented reality. Or we could see something completely out of the norm. It really is hard to say!

Apple expects to host about 5,000 developers, with hundreds of Apple engineers available to answer questions and host app development sessions. Developers who cannot attend will be able to watch the sessions through the WWDC 2017 website, and the WWDC app for iPhone, iPad, and Apple TV.