Microsoft Releasing Preview builds for the Windows 10 Creators Update with new features and improvements, Recently Microsoft released Windows 10 Build 14986 to the Insider Preview Fast Ring. which possibly has the most new features of any previous preview build for the Windows 10 Update coming Spring 2017. The new build introduces a massive number of new features, improvements and changes. As it stands, Creators Update seems to be shaping up to be a versatile operating system that can cater to the needs of creative production teams and business users alike. 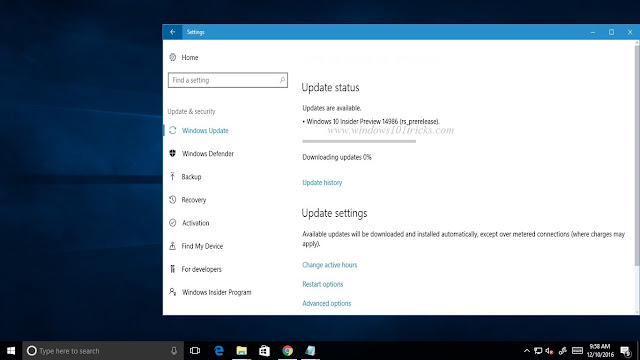 However, just like it’s the case with just about any Windows Preview build, new features and improvements are not the only things it brings. Various issues and problems are a common sight in Windows 10 Preview builds, and build 14986 is not an exception. Lets Get a Review New improved Features and Known issues.

Build 14986 features a long list of Cortana improvements, including the new voice commands for turning off your PC and changing the volume, support for new music apps (iHeartRadio and TuneIn Radio) with a new “What’s playing?” voice query, music recognition support for China, full-screen support when your PC is unlocked and idle, and Azure Active Directory (AAD) sign-in support. The best part is that Cortana will now be full-screen when your system is in idle mode, which gives you instant access when you need it.

1. Now you can shut down your PC just by asking Cortana. You can also restart, lock, or put the system to sleep, and raise and lower your system volume with just your voice.

2. You can now use Cortana to control music playback on more of your favorite music apps (EN-US only). Starting with this build, we’ve enabled natural language compatibility for iHeartRadio and TuneIn Radio. This will work on both, above the lock screen (PC is locked) as well as below! 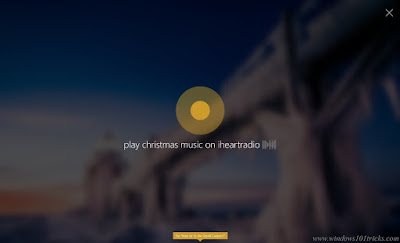 3. you can also use your voice to control playback and volume. With radio stations, we often want to know what that catchy tune is that has played a million times, so we added support for “What’s Playing”. Try saying “Hey Cortana, What song is Playing?” and it will work for all apps playing music.

4. Cortana can now recognize music for customers in China. Simply tap the music notes icon in the top corner of Cortana’s home page, and Cortana will listen to whatever music is playing and use Netease to tell you what song it is. This works exactly like the feature does in English (United States). You can also say “Hey Cortana, what’s playing?” (except, in Chinese, of course, so you’d say 你好小娜，这是什么歌) and Cortana will start listening to the song. 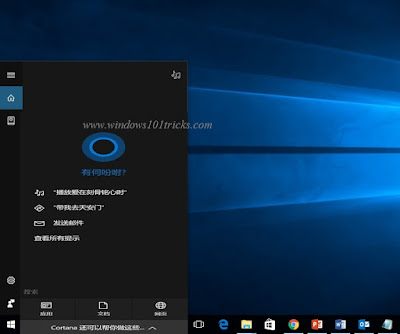 5. Cortana sign-in using Azure Active Directory (AAD) identity: This capability will allow you to sign into Cortana with your work or school account instead your MSA, enabling you to use Cortana even if your organization does not support MSA. To sign in to Cortana using your work or school account, just go to Cortana’s Notebook and “About Me” and sign in. You’ll get the full Cortana experience with most of the same features. AAD join is currently only available on Windows 10 PCs.

Taking Windows Ink experience to the next level Microsoft also added some additional enhancements to what build 14951 brought in. These include recalling previous Screen Sketch sketches, updated flyout visuals, sub-degree increments for ruler rotation and a more polished overall look for the application.
1. with build 14986 you can now resume previous sketches! By default, when you open Screen Sketch, it will always open to a new screenshot, but now you can click on the Resume button and it will take you back to the sketch you were working on when Screen Sketch last closed. 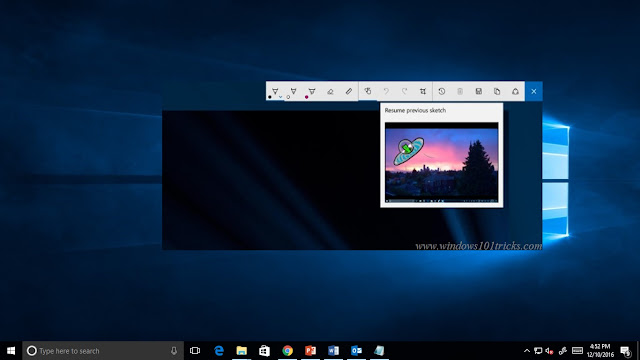 2. The Windows Ink pen, pencil and highlighter flyouts now show a preview of what it would look like to ink with the currently selected color and width. This improvement will be visible in any app that uses Windows Ink with the Windows 10 Creators Update SDK.
3. Also updated the Windows Ink ruler to now rotate in sub-degree increments when you’re moving it with touch, so as to make it easier to line the ruler up with two points on the screen

New Extensions in Microsoft Edge
With creators update Insider Build 14986 for windows 10 Microsoft Also brought in some new extensions with this flight, like the password management tool Intel TrueKey and cash back app Ebates.
New Edge extensions. This remains a weak spot for both Edge and Windows 10, but Microsoft is forging ahead. You can now get three new extensions: Ebates, Intel TrueKey, and Read & Write. 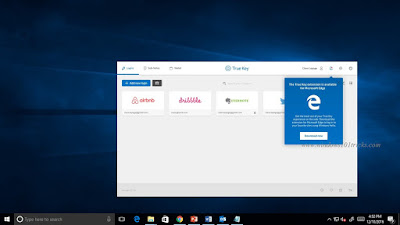 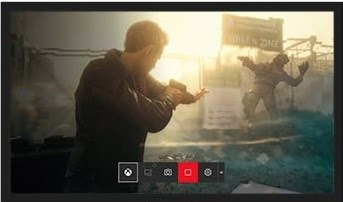 with Windows game bar. As always, just hit WIN + G to invoke Game Bar to capture a recording or screenshot.
New Secure Improved Windows Defender Dashboard
Microsoft  added New Windows Defender Dashboard in this creators update build 14986 , providing a friendlier front-end to Windows 10’s security and health features. After upgrading to this build, Insiders will have to restart their PC. After that, they can find the dashboard by searching for “Windows Defender” and clicking on the search result that says “Windows Defender/Trusted Windows Store app”. Remember, the dashboard is a work-in-progress and not fully functional just yet. 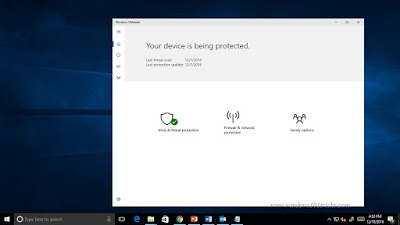 Windows 10 creators update Narrator improvements
This build Windows 10 creators update Insider Preview Build 14986  includes a number of improvements to Narrator, including keyboard shortcuts to hear additional information about fonts, colors, line spacing, margins and more; Context Awareness changes; a new keyboard shortcut for getting advanced information about the selected item (CAPS LOCK + 0, used to be CAPS LOCK + FN), and various fixes. Press Caps Lock + F to hear this information. Continue to press Caps Lock + F to cycle through nine categories of information. Use Shift + Caps Lock + F to move through these categories in reverse.
Registry Editor improvements Insider Preview Build 14986
With Windows 10 Insider Preview Build 14986  Microsoft has added standard File Explorer keyboard shortcuts to the Registry Editor so it’s easier to navigate with the keyboard. You can use ALT + UP ARROW to go up, ALT + LEFT ARROW to go back, and ALT + RIGHT ARROW to go forwards. You can also customize the font used by the Registry Editor now.
New Enterprise cloud printing Feature On Insider Preview Build 14986
A new Enterprise Cloud Printers discovery UI found in Settings, Devices, Printers & Scanners will help corporate users find company printers when signed into AAD. This feature requires the corresponding backend services to work, which are not yet available.

Improved update experience For Windows 10 creators update Insider Preview Build 14986
This is unrelated to the UUP “pause” last week, but this build does include two improvements to updating. First, if Windows Update is unable to find a good time to restart your machine to apply the latest updates, you will now get be prompted to “Restart now”, “Schedule” a time that works for you, or simply “Remind me later” which will not apply the update but offer you these options again, Dona says. Second, there’s now a simplified process for freeing up disk space if needed for upgrading.

4. Fixed the issue where navigating to Settings > System > Battery would crash the Settings app.
5. Fixed an issue where double-clicking on an Excel document to open it from File Explorer would crash Microsoft Excel

6. Fixed an issue where the Clock and Calendar flyout in the taskbar wouldn’t launch when the display language was set to Chinese (Traditional) and the system was using the phonetic sorting method.

Subscribe to Windows101tricks - A Simply Windows 10 Tips And Tweaks