Fixing All Blue Screen of Death Errors in Windows 10 and 8.1

Blue Screen Error happen whenever your computer is encountered with something it doesn’t know how to process, so it shuts itself down to prevent any damage. Sometimes BSOD just happen once and you don’t see them again when you restart, If this blue screen error occurs frequently, You should take steps to fix it. Before knowing the solution, you should know the reasons
BSODs appear when Microsoft Windows encounters a critical error it can’t recover from, requiring a reboot and possibly resulting in lost work. 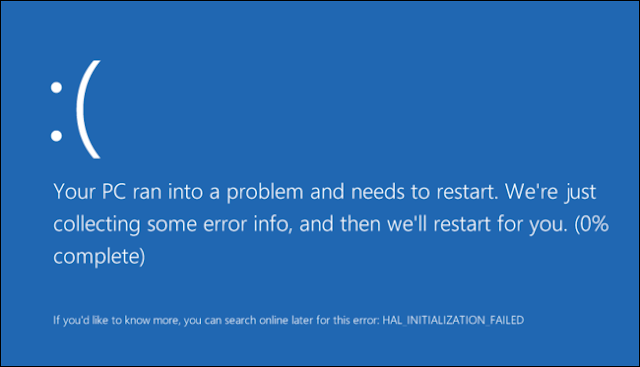 A blue screen of death is the worst type of error a computer can experience, unlike an application crash, which doesn’t bring down the whole system.

What Causes Blue Screens of Death

The WHEA_UNCORRECTABLE_ERROR bug check has a value of 0x00000124. This bug check indicates that a fatal hardware error has occurred. This bug check uses the error data that is provided by the Windows Hardware Error Architecture (WHEA) 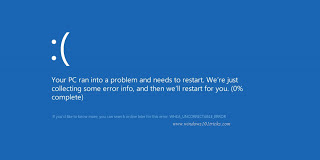 WHEA_UNCORRECTABLE_ERROR occurred when any of device drivers are not compatible with the operating system. This 0x00000124 error is also show for Hardware failure like : Hard drive not responding, your RAM memory not responding or your main board is not working correctly Continue Reading....

When the "Your PC ran into a problem and needs to restart. We're just collecting some error info, and then we'll restart for you. . (0% complete)" blue screen error message appears on the screen, on windows 10, windows 8.1 and windows Server 2012 systems. That means 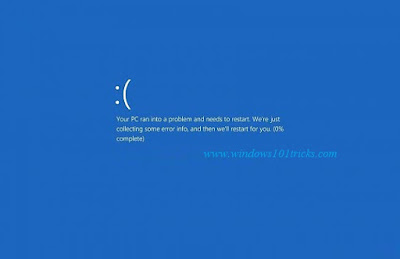 When Windows encounters a condition that compromises safe system operation, the system halts. This condition is called a ‘Bug Check’. It is also commonly referred to as a system crash, a kernel error, a system fault or a Stop error. When Windows encounters such a serious error that forces it to stop running and restarts the system. Continue Reading

How To Fix PFN_LIST_CORRUPT Blue Screen Error on Windows 10 and 8.1

Blue Screen of death is the most annoying Error for windows users. PFN_LIST_CORRUPT (stop code 0x0000004E) is another BSOD. This is most occurred on windows 10 and 8.1 systems and this Error may appear suddenly and restarts your pc. 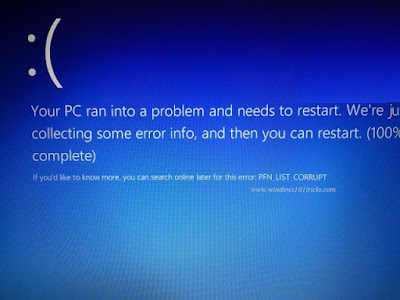 The PFN_LIST_CORRUPT Blue screen of Death is caused whenever the page frame number(PFN) list becomes corrupted. The PFN is used by your hard drive to determine the location of each one of your files on the physical disk.  In most cases, you will experience PFN_LIST_CORRUPT blue screen errors after you’ve installed new hardware or software.

The CRITICAL_PROCESS_DIED blue screen of death errors which also known for its bug check error code of “0x000000EF”. Having this problem on your computer fully indicates that your windows operating system having some trouble to proceed one or more of your system’s process.
If the processor is unable to process these multiple processes properly, it generates the CRITICAL_PROCESS_DIED error. Sometimes this error can be quite critical as it could damage your hard disk, memory or in rare circumstances, your processor. 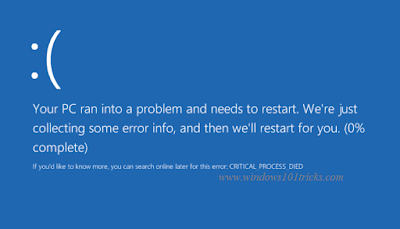 This blue screen error may appear any time. Normally, It will come with the following message.

“Your PC ran into a problem and needs to restart. We’re just collecting some error info, and then we’ll restart for you. (0% complete) If you’d like to know more, you search online later for this error: CRITICAL PROCESS DIED”

Fix "BAD_POOL_HEADER " Blue Screen error on Windows 10 , 8.1 startup
BAD_POOL_HEADER is a blue screen error of Windows. It is similar other BSOD errors such as Driver_Power_State_Failure, Kernel Security Check Failure, page fault in non Paged Area etc. It may appear in any versions of windows. Specially, Windows 10 and windows 8.1 users may face this problem. This BSOD may appear temporarily. After restarting PC, Bad pool header may disappear. But sometimes it may become your nightmare. 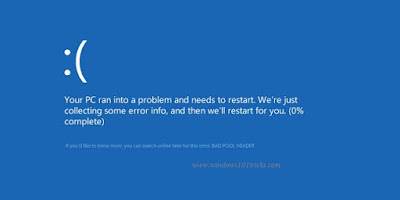 In the case of bad_pool_Header, what has happened is that a thread in your processor has made a bad pool request. This means that it’s asking to use resources that are unavailable, nonexistent, or in use by another thread. It could also mean that the pool header is corrupted  regardless of the particular error, it, like most BSOD is caused by driver issues. Lets fix This error Continue Reading ...
How To Fix The Bad_System_Config_Info Error (0x00000074) In Windows 10, 8.1, 7
BAD SYSTEM CONFIG INFO is one the of most seen windows blue screen of death error. After recent update of many windows 10 users are experiencing this BSOD problem. But this is not a new issue. Previous windows versions windows 7, 8.1 & 8 users also faced this error. You know this type of problem can be appeared in any version of windows. It is also known as BugCheck 0x74. Else, It may appear with the following error codes STOP 0x00000074 (0x00000003, 0x00000002, 0x80087000). These things prove that BAD_SYSTEM_CONFIG_INFO can be a serious issue for any users. So, you should fix it as early as possible. 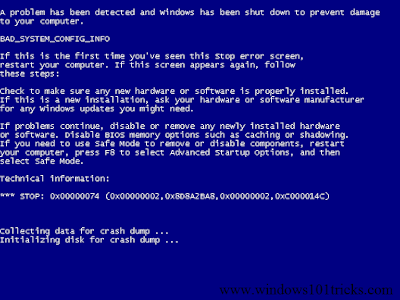 After login into your windows or before that, You may face blue screen problem with the error message BAD_SYSTEM_CONFIG_INFO with some codes like STOP 0x00000074. If you want to fix this bad_system_config_info error, first Continue Reading......
Fix IRQL_NOT_LESS_OR_EQUAL BSOD error On windows 10 / 8.1 / 7
In most cases, you will experience IRQL_NOT_LESS_OR_EQUAL blue screen errors after you’ve installed new hardware or software. These IRQL_NOT_GREATER_OR_EQUAL blue screens can also appear during program installation, while a Microsoft Corporation-related software program (eg. Windows Operating System) is running, while a Windows driver is being loaded, or during Windows startup or shutdown. Keeping track of when and where your STOP error occurs is a critical piece of information in troubleshooting the problem. 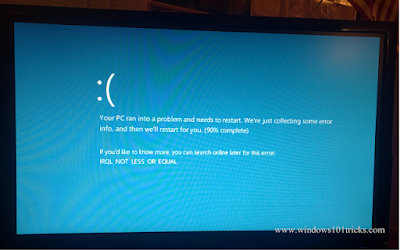 IRQL_NOT_LESS_OR_EQUAL, Stop: 0x0000000A, stop 0A or 0x0000000A whatever you call it’s a blue screen of death problem and this error code message status shows us, that some kernel mode process or driver attempted to ingress in a memory address which won’t able to complete their access Continue Reading....
Fix DRIVER_POWER_STATE_FAILURE with BSOD in Windows 10 / 8.1
The Main reason behind Power State Failure Driver and BSOD in Windows 10 / 8.1 is the incompatible driver for any hardware device connected to or in your system. Driver Power State Failure is an error that mostly displayed due to incompatible or inappropriate driver for any hardware device installed in your computer. Your PC becomes unable to understand the situation how to deal with the driver and prompts blue screen. Besides this, defective registry files and corrupt data may also lead to this error. 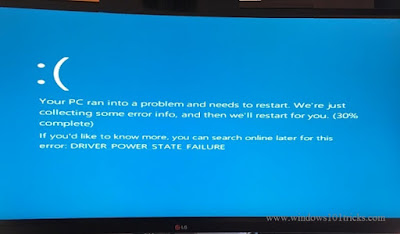 This error is related to the driver on your Windows computer, and usually happens when you install a new driver. If you recently installed a new hardware device, make sure you’ve got the updated drivers from the manufacturer’s website Continue Reading....
How to fix Memory Management error 0x0000001a
Memory Management error also known as 0x0000001A shown above is a critical Windows error. When Windows detects a malfunction in the system memory or drivers, it crashes itself and displays this error message in a blue screen window.  Blue screen message indicates that Windows has a serious issue which needs to be addressed immediately.  Usually Blue Screen of Death (BSOD) is caused by hardware issue or malfunctioned, outdated, corrupted drivers. Fixing the root cause will heal Windows and BSOD will not appear again. 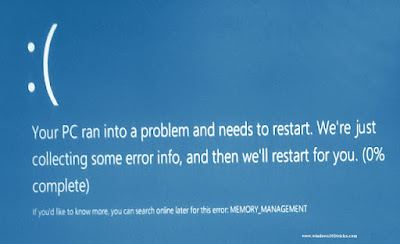 I’m going to show you a couple of tricks for resolving MEMORY_MANAGEMENT error Continue Reading....
Fix INACCESSIBLE BOOT DEVICE error on Windows 10
The INACCESSIBLE_BOOT_DEVICE bug check usually indicates that the Windows operating system has lost access to the system partition during startup. If this happens, the system usually shuts itself down after showing a Blue Screen or Stop Error to protect itself from probable data corruption or loss. 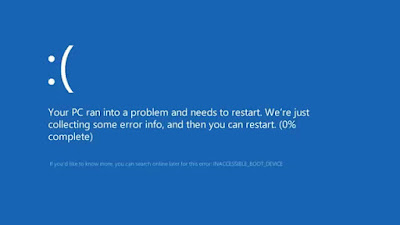 Inaccessible_Boot_Device error is one of the BSOD errors. BSOD means blue screen of death. When this Blue Screen error occurs, your PC screen will turn blue and will display this message As Shown bellow image. This is serious type error and generally occurs in windows  8.1 or 10. Lets See The Steps To fix This Error continue Reading.....
Fix Windows 10 NTFS FILE SYSTEM  Blue Screen Of Death Error
Blue screen of death is a major problem for windows users. NTFS FILE SYSTEM is another BSOD. Every windows users may encounter this issue Blus Screen of Death / Show Blue screen with White Text. who upgraded their System from windows 7 or 8 to 10 have reported this error many times 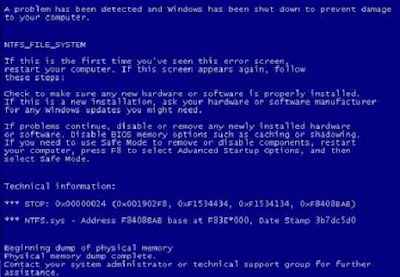 Lets See The Steps To Fix This Error Continue Reading.......
Fix Computer crash  freezes Auto Restart with BSOD after upgrade to windows 10 / 8.1
After upgrade to windows 10 you may face Computer crashs and freezes continuously. Your Windows PC may have automatically rebooted itself and showing blue screen with some Error code.
The issues mostly encountered by the users were incompatibility of hardware and drivers because initially, they were designed to run on your original windows before upgrading, and after the upgrade they transited permanently into Windows 10. This is by far the most common cause of random hangs & freezes on Windows 10. 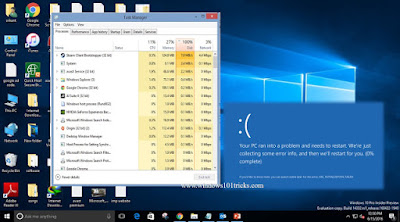 On Windows 10 computers when the system becomes unresponsive (the user cannot do anything on the computer), the only method to get Windows 10 back and working is to continuously press the Power button to completely shutdown the system. Here Tips To Fix This Error Continue Reading...

What to wear: outfit ideas for Christ…
Novedades Planeta Cómic Noviembre 202…
Grammy-Winning Blues-Rock Guitarist M…
5 easy ways on how to fix your credit
Discover the Magic of Venice in Novem…

Fixing All Blue Screen of Death Errors in Windows 10 and 8.1

Subscribe to Windows101tricks - A Simply Windows 10 Tips And Tweaks