Microsoft brings VS Code to the Web Browser

While this isn't the first attempt at bringing VS Code to the web, as Microsoft had in 2019 released a web-based version of its Code Editor, Visual Studio Online, which was previously in a private testing with select developers. But the initiative later morphed into GitHub Codespaces and remains under the direction of GitHub.

Now, the new VS Code for the Web provides many of the features of VS Code desktop, including search and syntax highlighting while browsing and editing, along with support for extension to work on your codebase and make edits simpler.

How VS Code for the Web differs from VS Code desktop?

The new VS Code for the Web is a browser-based version of the popular code editor, allowing easy navigating of files and repositories and committing lightweight code changes. 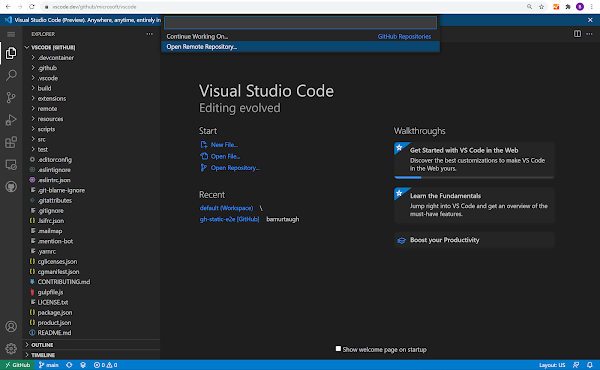 For developers who need access to a runtime to run, build, or debug their code, it is recommended moving to the desktop application or GitHub Codespaces for full access to capabilities of VS Code. Also, VS Code desktop allows you to run extensions that are not yet supported in the web version, and make use of a full set of keyboard shortcuts not limited by browser.

As VS Code for the Web runs entirely in a web browser, it offers a very limited execution environment. Albeit, support for Azure Repos in Visual Studio Code for the Web is already in preview, and the experience will help it to improve over time.

Getting started with VS Code for the Web

VS Code for the Web is live at https://vscode.dev, you can create a local file or new project, or perhaps, work on an existing local project, and access source code repositories that are hosted elsewhere, such as on GitHub and Azure Repos, part of Azure DevOps.

And to work with both GitHub and Azure Repos, you should note that VS Code for the Web supports only two routes, vscode.dev/github and vscode.dev/azurerepos:

Microsoft brings VS Code to the Web Browser