I was required (emulated) virtual fake SSD in Vmware Workstation for few demos and testing purpose. I am already using SSD on my system, If vmdks are kept on the Solid state drives, VMs detects vmdk disks as SSD/Flash disk, but if you don't have SSD, it can be easily emulated with a trick configuration, but doing so performance is the same as HDD.

PART 6 : CONFIGURE Vmware WORKSTATION TO SAVE SSD SPACE AND TIME

I have attached multiple disks on esxi server, in the Esxi on the Configure tab >> Storage Devices settings, all the local and remote disks are listed. Here see the disk drive type, it can be changed selecting it, by clicking button HDD to flash. Doing this will mark normal HDD as Flash disk and HDD button will change as F.

For esxi server doesn't require much setting, but If you require fake emulated SSD in Microsoft windows Server OS, It can be done with a modifying (adding) configuration to VM vmx file. First I want to show here, I have one disk (C:) already on SSD and other (E:) HDD, I can get same information using PowerShell command Get-PhysicalDisk. Hard disk drive is shown as Unspecified.

First poweroff Virtual Machine, open VMX file in notepad and identify scsi disk location, here my second disk is 10 GB and it is located as scsi0:1. Add a new line scsi0:1.virtualSSD = 1 and save it. Power on virtual machine.

Once powered on VM, Verify the same in defrag on windows system or check it using Windows Powershell command. 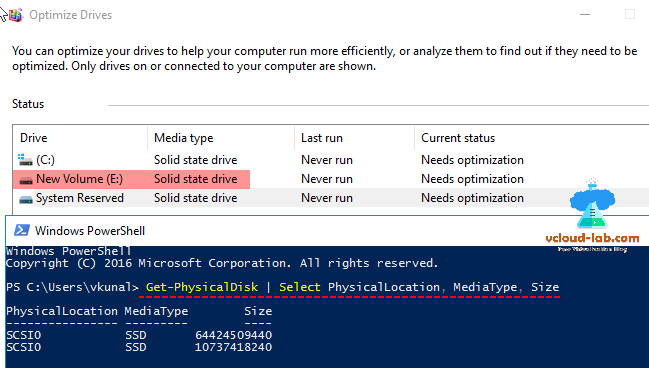 The above steps I configured can be used on Esxi vm (Virtual machines) as well, Make sure VM is powered off before configuration. Right click VM and select Edit settings. In the VM Options tab expand Advanced, click Edit configuration in Configuration Parameters. In the wizard add Name and value, Power on VM to view SSD changes.

Fed Up Of Handling Mountains Of Employee Related Paperwork? Here's What To Do