Following by my earlier chapters, My storage is setup correctly, Now I will storage vmotion, migrate virtual machines on this newly deployed datastore. Before I would like to show you connectivity and multipathing options under Datastore view >> Datastore >> Configure Tab. Here I see the mounted datastore (Device ID with NAA id), click Edit Multipathing button and change Path selection policy to Round Robin (VMware). I see paths on the datastore are in green status means OK. (Changing PSP in runtime has no issues)

By default, VMware provisions the next path selection policies. If you have a third-party PSP deployed on your Host, its policy also appears on the list. (ie: Third-Party PSP example EMC Powerpath), before changing changing paths selection policy (PSP), consult your storage team as well as vendor and documentation guide for best performance and practices.

Fixed (VMware)
The host uses the chosen preferred path, if it has been configured. Otherwise, it selects the first operational path learnt at system boot period. If you want the host to use a specific preferred path, specify it manually. Fixed is the default policy for most active-active storage devices.
Note: If the host uses a default preferred path and the path's status turns to Dead, a new path is selected as preferred. However, if you explicitly designate the preferred path, it will remain preferred even when it becomes inaccessible.

MRU or Most Recently Used (VMware)
The host chooses the path that it used most recently. When the path becomes inaccessible, the host selects another path. The host does not return back to the original path when that path becomes accessible again. There is no preferred path setting with the MRU policy. MRU is the default policy for most active-passive storage devices.

Round Robin (VMware)
The host uses an automatic path selection algorithm rotating through all active paths when connecting to active-passive arrays, or through all available paths when connecting to active-active arrays. RR is the default for a number of arrays and can be used with both active-active and active-passive arrays to implement load balancing across paths for different LUNs.

Once I know all storage paths are in optimal status, I will migrate VM on this new datastore, In the summary I see hard disk are located on old datastore. Also note the IP address. To view IP on summary tab, you must have installed VMware tools in Virtual Machine and IP assigned. 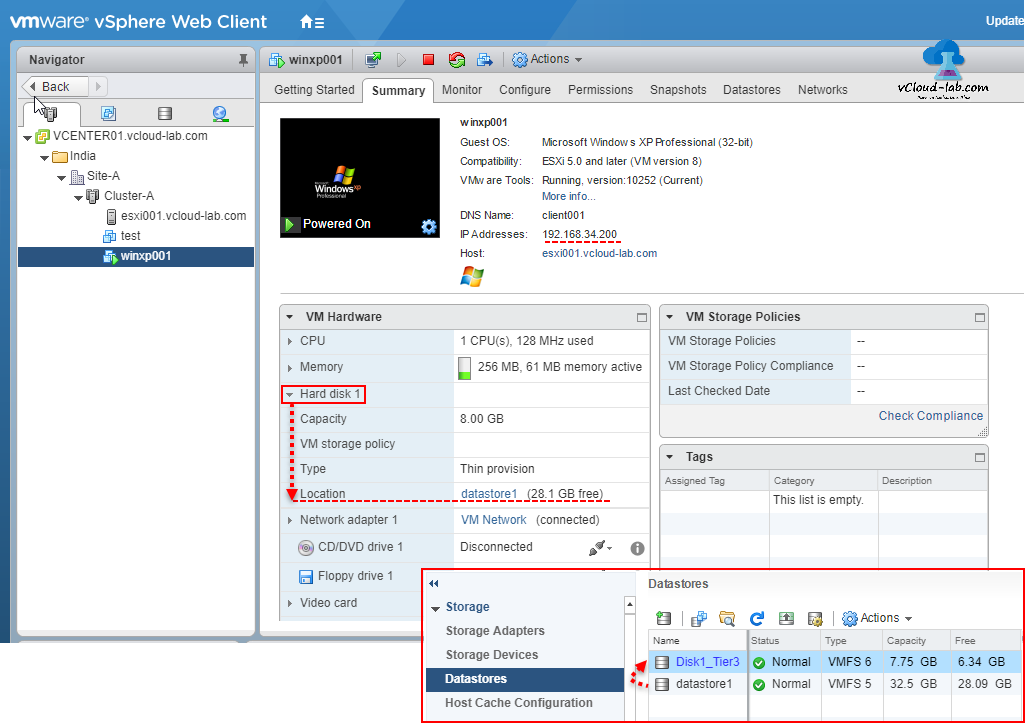 Under select storage migration option select datastore from list (shows visible and compatible disk with host), verify  once moved VM it will have enough disk space. If selected datastore is good for migration it shows compatibility checks succeeded with green check mark. (Most of the time it might not succeed due to in sufficient space), click next. (I am changing select virtual disk format to Thin provision to save some space, hard disk will grow as data is filling inside VM. another thing I have option here in advanced to move individual vm hard disk to migrate) 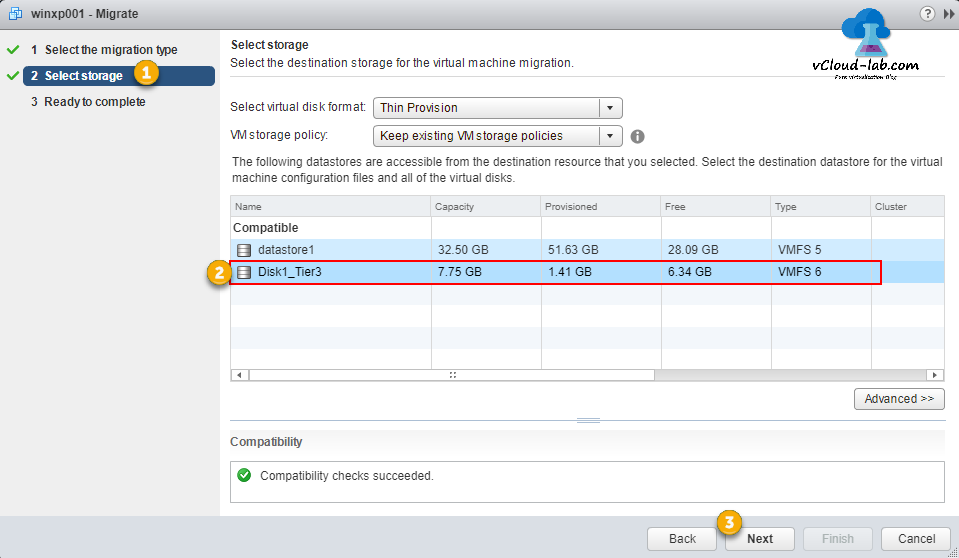 This is last screen and ready to complete, review changes and click finish.

I see relocate virtual machine is successful in recent tasks. I reviewed my ping test, there was no ping loss (You might see 2-3 ping loss, its depending on your storage and networking latency performance). This is done without downtime. 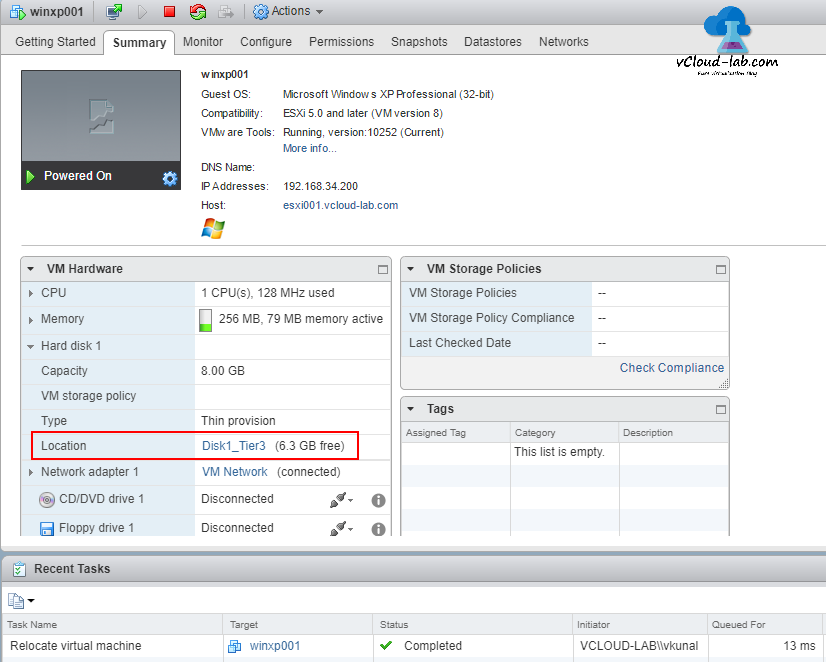 Next I will simulate vmware esxi physical adapter failure by removing or shutting down switch. below are the before and after screenshot. In physical nic adapters, vmnic3 is connected and showing speed, and after pulling cable check the status again on vmnic3 its down and disconnected. 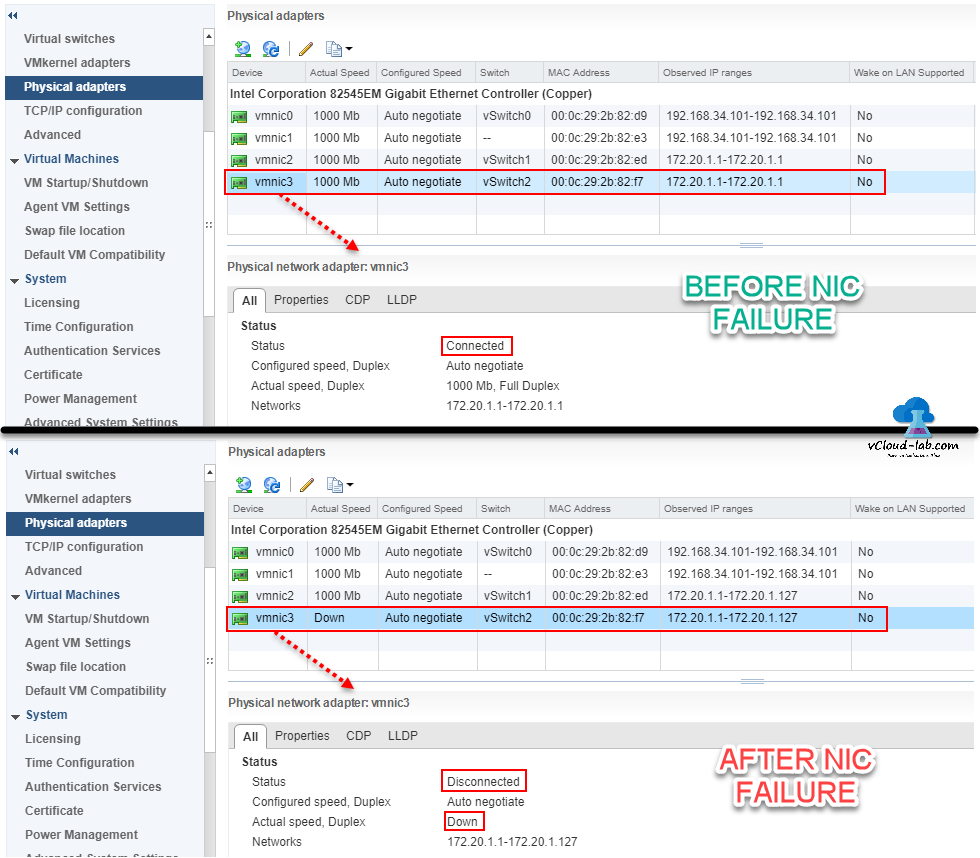 In the vSphere Client, each storage device, or LUN, is identified by several names, including a friendly name, a UUID, and a runtime name.
Name
This is a friendly name that the ESX host assigns to a device based on the storage type and manufacturer. You can modify the name using the vSphere Client. When you modify the name of the device on one host, the change takes affect across all hosts that have access to this device.
Identifier
This is a universally unique identifier assigned to a device. Depending on the type of storage, different algorithms are used to create the identifier. The identifier is persistent across reboots and must be the same for all hosts sharing the device.
Runtime Name
This is the name of the first path to the device. The runtime name is created by the host, is not a reliable identifier for the device, and is not persistent.
The runtime name has the following format: vmhba#:C#:T#:L#.

vmhba#
The name of the storage adapter. The name refers to the physical adapter on the host, not to the SCSI controller used by the virtual machines.
C#
The storage channel number. Software iSCSI initiators use the channel number to show multiple paths to the same target.
T#
The target number. Target numbering is decided by the host and might change if there is a change in the mappings of targets visible to the host. Targets that are shared by different ESX hosts might not have the same target number.
L#
The LUN number that shows the position of the LUN within the target. The LUN number is provided by the storage system. If a target has only one LUN, the LUN number is always zero (0).

For example, vmhba1:C0:T3:L1 represents LUN1 on target 3 accessed through the storage adapter vmhba1 and channel 0.