Difference Between iPhone 7 and iPhone 6s

There is a difference between iPhone 7 and iPhone 6s 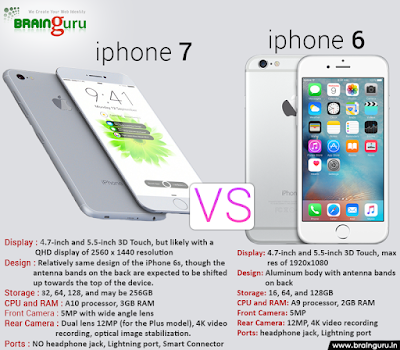 Display: 4.7-inch and 5.5-inch 3D Touch, but likely with a QHD display of 2560 x 1440 resolution
Design: Relatively same design of the iPhone 6s, though the antenna bands on the back are expected to be shifted up towards the top of the device.
Storage: 32, 64, 128, and maybe 256GB
CPU and RAM: A10 processor, 3GB RAM
Front Camera: 5MP with wide angle lens
Rear Camera: Dual lens 12MP (for the Plus model), 4K video recording, optical image stabilization.
Ports: NO headphone jack, Lightning port, Smart Connector


As far as specs go you can expect the iPhone 7 to see a new A10 processor and M10 motion-coprocessor. They’ll no doubt be an improvement over the A9/M9 found in the current iPhone 6s, but by how much, who knows? If you go by averages, you can expect about a 20% speed bump from the processor.

With the iPhone 6s Apple boosted the RAM to 2GB. There’s a chance the iPhone 7 will boast 3GB of RAM, though Apple doesn’t like making RAM upgrades every year. However, because of the lack of major design changes expected to the iPhone 7, Apple’s going to have to add some pretty good internal changes to get people to upgrade. 3GB of RAM could do the trick.

Difference Between iPhone 7 and iPhone 6s