Cannon Beach, OR - At approximately 2:30 AM PST, an alien craft was spotted over the Oregon coast near the town of Cannon Beach. Witnesses were able to take a photo of this strange orb as it approached the coastline. 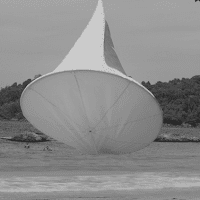 "Me and the Mrs. were out for an evening stroll along the shoreline, when we dang near got hit by a freakin UFO! I was too flabbergasted to do anything, but the wife slapped me and shouted, "Take a picture, Clem" and I whipped out the camera and took a shot. I didn't know if I had gotten anything until we developed the photos this morning."

Mrs. Mayhill commented that the object hung in the air for what seemed to be 5 or 10 seconds then shot away from them at light speed.

"I could swear I saw two beings inside the craft," said Mrs. Mayhill. "They seemed very comfortable and relaxed, almost like they were on vacation and looking for a place on the beach."

She went on to say that she imagined herself inside the cozy-looking nest and said that it wouldn't take her more than a few minutes to fall asleep inside the cacoon-shaped vessel. 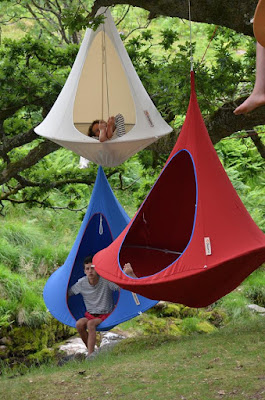 Other witnesses mentioned it's uncanny resemblance to a new product called just that - the Cacoon Hammock. The Cacoon Hammock is a hammock-type enclosure that can be hung from any strong branch or other suitable support. It's safe and strong, small enough to carry yet big enough to share. Its weather-proof fabric is resistant to all the elements. It’s been tested and hung in all types of environments – in the garden, on a hike, in the woods, by the coast, in the office, in sports and leisure centers, in bedrooms and dens, in hotels and adventure playgrounds – inside and out, just hanging out and giving people a lot of fun.

The Cacoon comes in three sizes, Single, Double, and Bonsai (for one child.) You can get your Cacoon Hammock by visiting cacoonusa.com.

This post first appeared on BigFire Camping Gear Reviews, please read the originial post: here
People also like
CorelDRAW Photo Sale: Up to 30% OFF
Why PPE Is Crucial for Health and Safety in the Workplace
The Best Romantic Honeymoon Destinations in the United States
Best Restaurants in San Luis Obispo
USC gives honorary degrees to Japanese American students who had education cut short amid WWII