When it comes to off-road boots, there’s an enormous range to tempt the rider’s wallet. From super-soft trials boots and chunky adventure models to stormtrooper style motocross footwear. But picking the right one can be tricky, requiring a real honest analysis of what type of riding you are going to be doing, and what type of rider you are. Shelling out on a set of Alpinestar Tech 10s may not be the best move if you are going to be bimbling along the local lanes on a Honda CRF250L, but similarly, if you are going to riding off-road to Turkmenestan, then a set of low-ankle Hipster boots may not cut the mustard. For this blog, we’re going to be looking at the TCX Comp Evo Michelin so see how it stacks up in the dirt. 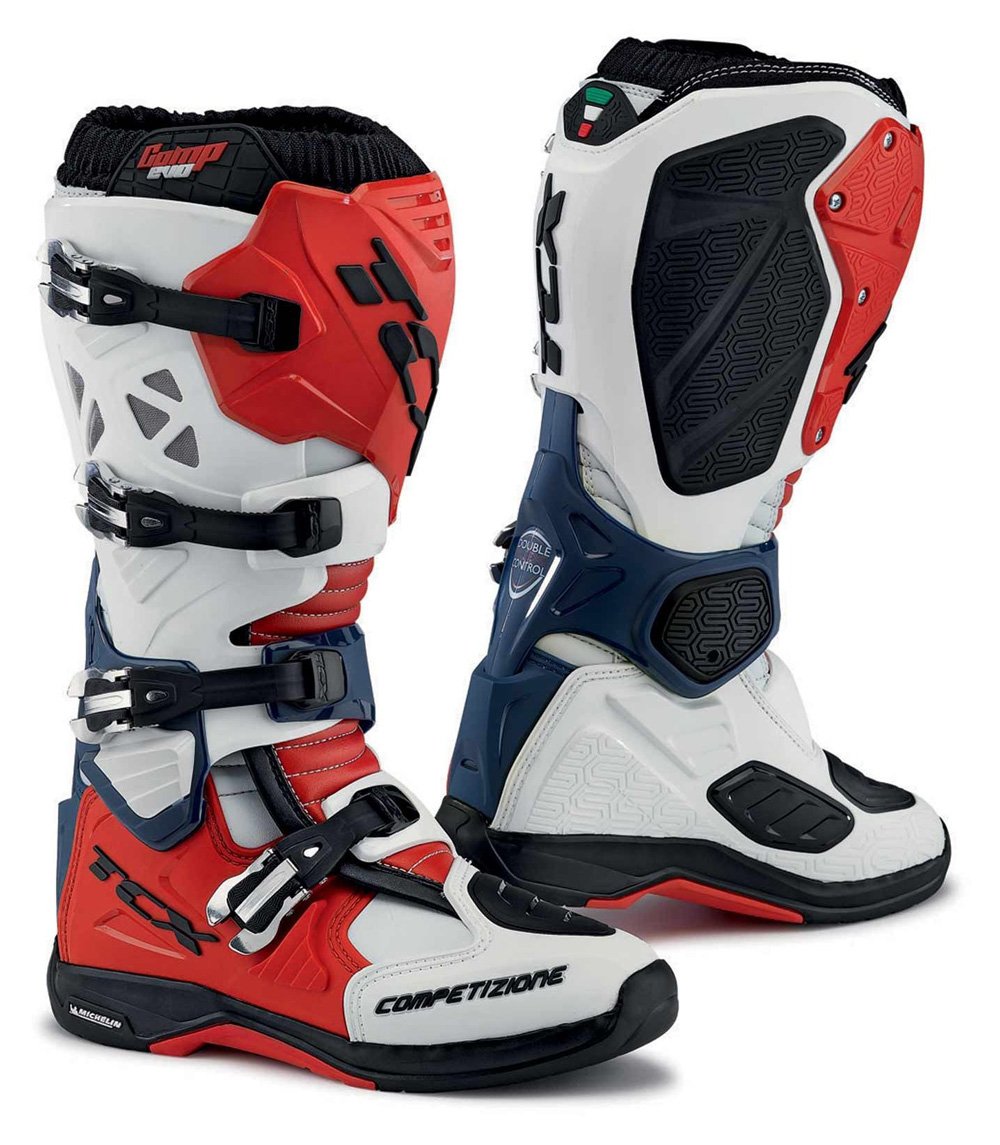 OK so lets set out our stall here – we’re big fans of TCX boots at Ride Expeditions. As the boot brand to take place alongside Alpinstars in the garage, we’ve set the bar pretty high. If your going head to head with the leading off-road boot, you better bring your A game.

But they’ve done just that. Our older set of TCX Pro 2.1s have been constant companions on riding expeditions from France to Vietnam, North Wales to South California. They’ve done the job.and for the most part, done it well.

So as the Tcx Comp Evo Michelin was offered as the replacement for the companies high-end boot, the upgrade was the obvious choice. We’ve had the boot for a season and a half and if you buy now you’ll get the latest version, the Comp Evo 2 Michelin. There aren’t a whole host of changes, the main differences seem to be the colour options.

So what are the main differences between the TCX Comp 2.1 and the new TCX Comp Pro Michelin ?

Well,  we better start with the Michelin bit. TCX have teamed up with the French tyre manufacturer to give the Comp Pro proper grippy soles. Don’t worry, it’s not an old tyre stapled on to the base, but a purpose built and very effective sole which is substantially better than the previous TCX boot, and streets ahead of a usual motocross boot.

And as a change for the more dual-sport, trail and adventure user, this is a great improvement. If you are going to be off the bike and moving it over different terrain, then some decent grip is very welcome.

But alongside the grip, TCX have also been able to build in good wear qualities to the sole, so there has been almost negligible wear to the surface. OK if you fit a set of Raptors then we can’t promise the same but for normal trail use, the compromise between feel and grip is as good as any of Michelin’s tyres. 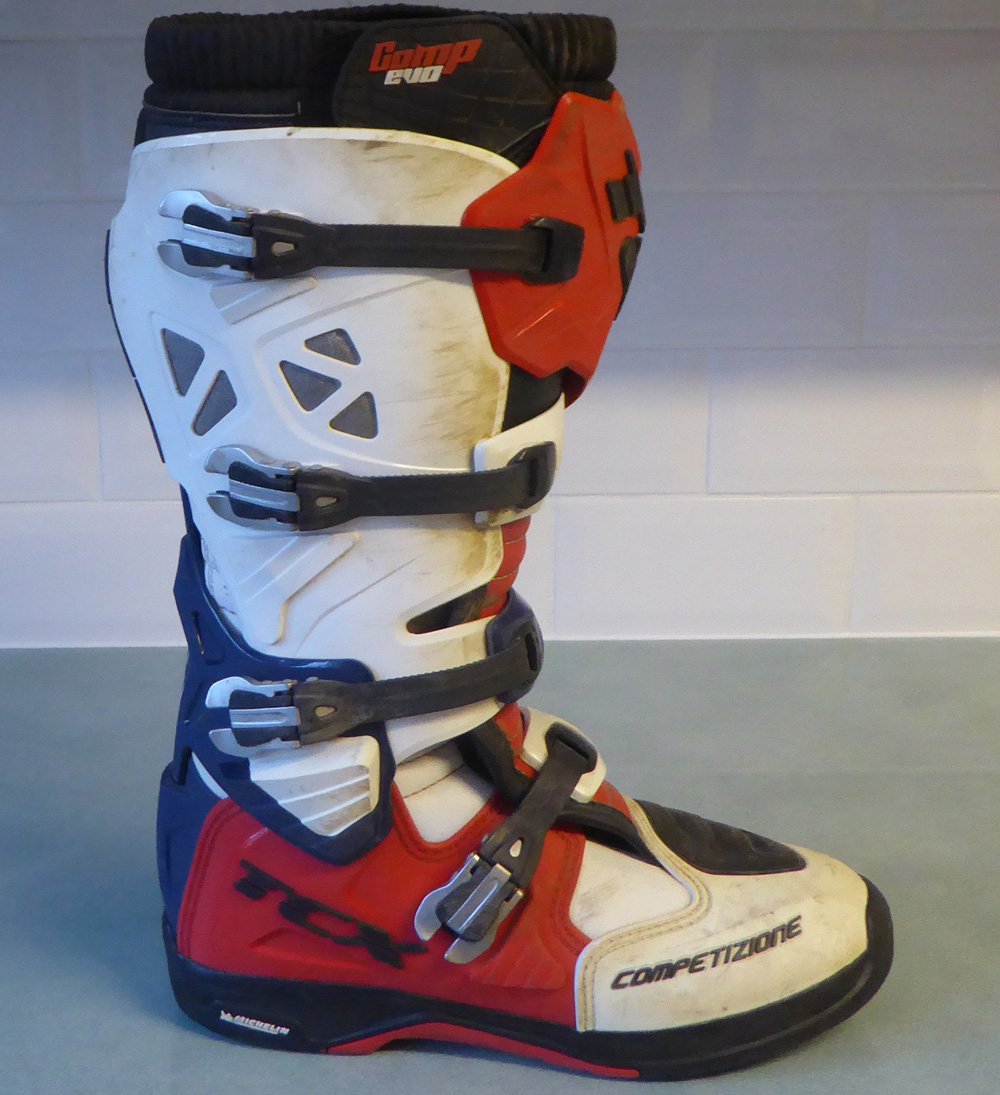 The second major change is TCX’s decision to abandon the inner boot that was a feature of the previous boot and it’s competitors.

This is maybe not such a welcome change for recreational riders as we liked the ability to remove the bootee, wash it out and dry it properly between rides – important if you’ve had the thing on for 15 hours straight.

Nonetheless, the inner of the boot is very comfortable and feels extremely well padded, while at the same time having plenty of toe room. If you are going to be wearing waterproof socks – which many riders will – then buying a tad larger than your normal size will perhaps make sense, so take the socks  along when you are looking to buy.

As with the previous version, the sole is flat rather than profiled, so if you need a bit if additional arch support, you are going to have to add some ‘aftermarket’ insoles. It’s maybe a sensible move if you are going adventuring in these boots as you may end up walking for longer distances than the manufacturer had anticipated! 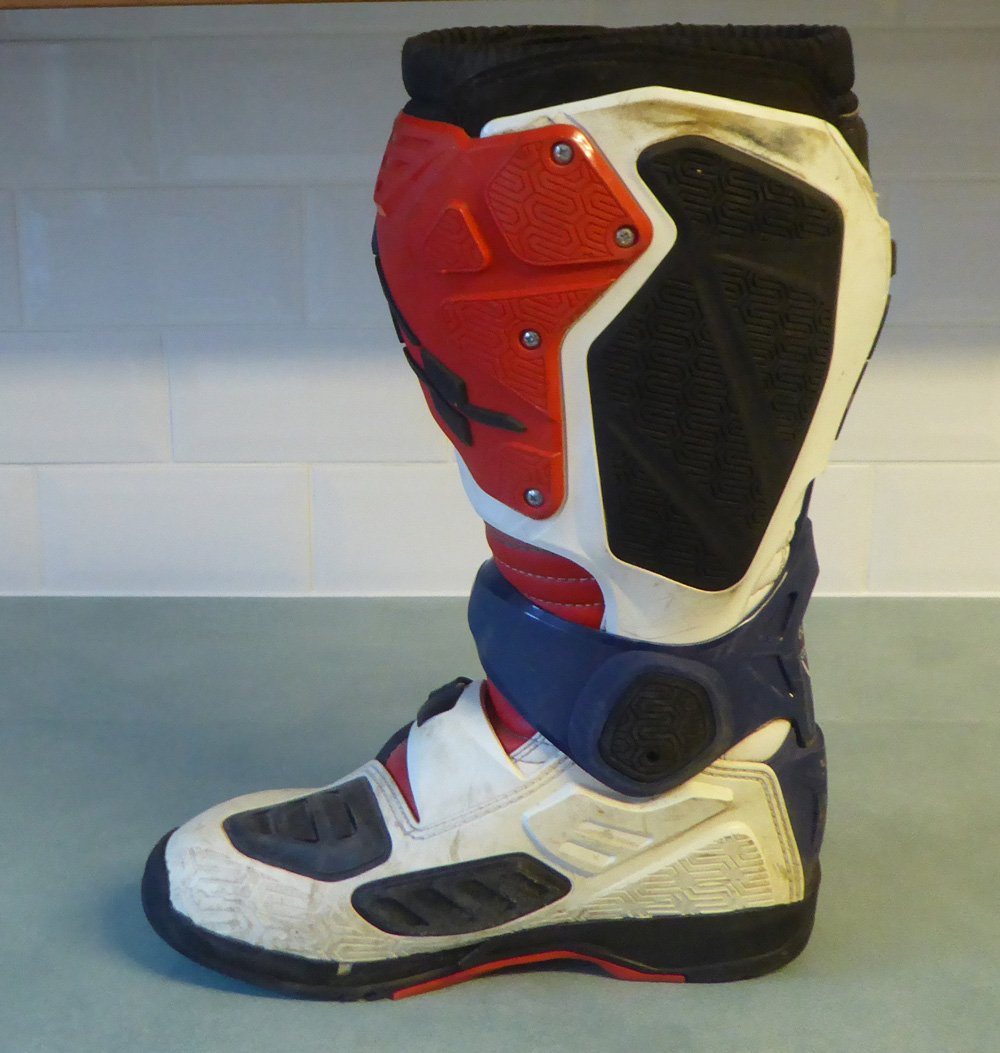 As regards the outside of the boot, the Tcx Comp Pro Michelin is fit for purpose, The buckles – a bug bear on the early TXC boots – are much the same as the previous 2.1s and as such do the job with a satisfying clip and stay put, It’s not quite Alpinestar positivity, more Sidi effectiveness – either way they do up easily and stay done up until you take them off. There are four of them, all fastening to the outside of the boot out of harm’s way, and they are easy to replace if you need to.

Underneath the outer shell and used to secure the inner boot before the buckles, there is double velcro pads, and there is also an elasticaed cuff at the top to keep out the dirt.

There’s adjustment in the calf / shin plate which allows it to be raised up or down if needed. This can be useful if it interferes with your knee pads or braces, but as that hasn’t been the case, we’ve not bothered to touch the plate.

We may not have moved the plate, but in reality it’s the shin plate that has caused us the major issue with these boots. 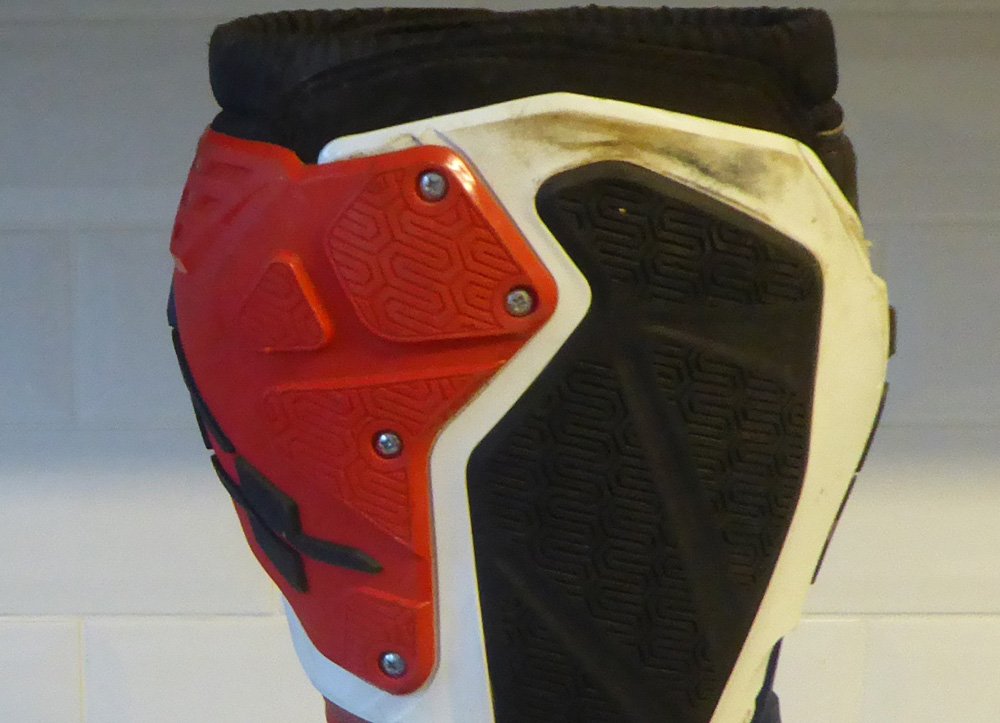 The problem is the thickness of the plate  on the first edition Michelins – when . OK it’s not maybe something that TCX has anticipated, but unless you are a motocross rider or always wear MX pants when riding off-road, the shin plate makes it very difficult to fit trousers over the top of the Comp Pro Michelin boots.

As with the socks – take along your enduro trousers when you try these boots to ensure that your kit works well together. The second version of the boot look to have a reduced sized shin plate, so it’s evident that this was something that TCX have recognised and adjusted.

So to the rest of the boot, there are few niggles and lots of good points. The protection is good around the entire foot, with a wide gear change pad and instep pad to prevent damage but to be really picky, we wish that pad went further down to where your boot sits on the footpeg.

The ankle support is excellent giving instant confidence as soon as you slip the boots on, yet the hinge – or ‘Dual Flex Control System’- allows enough movement when walking of getting physical on the bike.

There’s a large heat pad on the inside of the boot, covering the entire inner calf area and protecting the boot from hot engines and exhausts.

The toe box is a tad tall if you are not used to motocross style footwear, but for the second incarnation of this boot the company has reduced the size. Either way, it may need an adjustment of the height of your gear lever if you’ve been running more road-based boots as the TCX Comp Evo Michelin will be taller.

Another good aspect of the Michelin sole is the support it gives when stood up. Long days on the bike can really test the integrity and performance of any boot, and the TCXs manage the job well.  Getting a balance between flex and support is a delicate sceince – go too supportive and firm and the boot will feet like a pair of clogs – go too soft and the pegs will push into your insoles and make standing uncomfortable.

TCX have got the balance just right, and combined with the generous padding on the interior, it makes for a very comfortable boot to wear, no matter how long your journey takes. 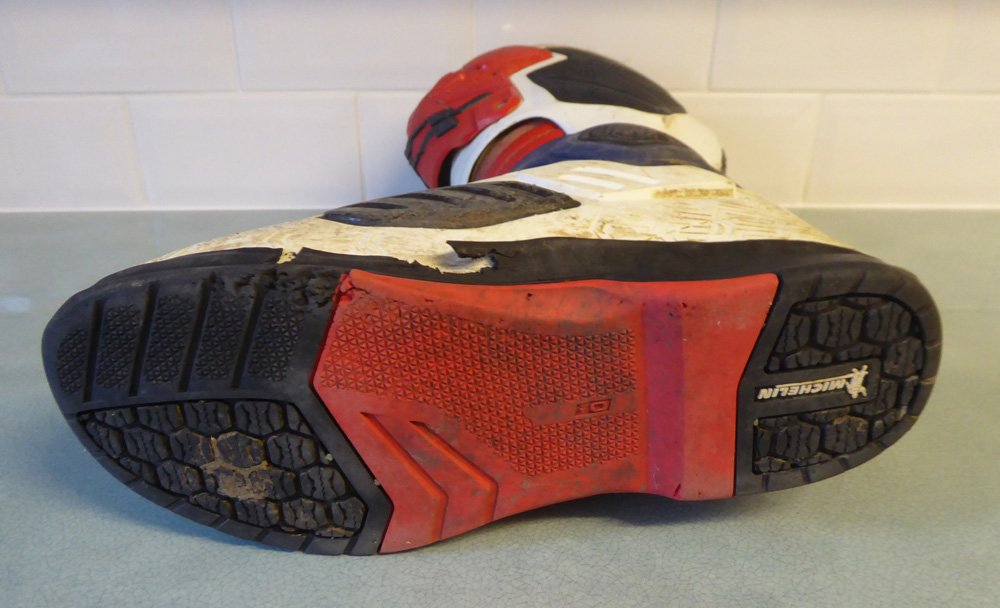 From our point of view, it’s hard to fault the comfort of the TCX MIchelins. The padded inner and sturdy outer cushion and protect your feet and lower leg perfectly. We have heard reports from riders with wider feet that the TCXs are not so compatible, but as that’s not us, we didn’t experience the problem.

OK so here the TCX boots let themselves down. If we were focussed on motocross riders, the the price point at just below £400 – £300 for the first editions that are still in dealers – is to be expected and hence unremarkable. However, in the adventure, trail and enduro market this price is expensive and when you can get Sidi Adventure Goretex  at around £250, it’s hard to chose the TCXs.

THe TCX Michelins are incredibly well designed and made and are putting up with regular abuse without complaint of much sign of wear. The only damage evident is on the inside of the instep, but as we always do this to boots. it’s probably more to do with our riding style than the boot! The lack of an inner boot makes drying slower than the previous bootee system.

It’s a straight 5 out of 5 in this category, The TCX Michelins look great and elevate the brand yet again towards the gold standard in this category – the Alpinestar Tech 10s. Wit a great selection of garish and bold colours, these boots scream their presence as if you are on the start gate at Anaheim 1. Whether you want that out on the trails is another matter …. 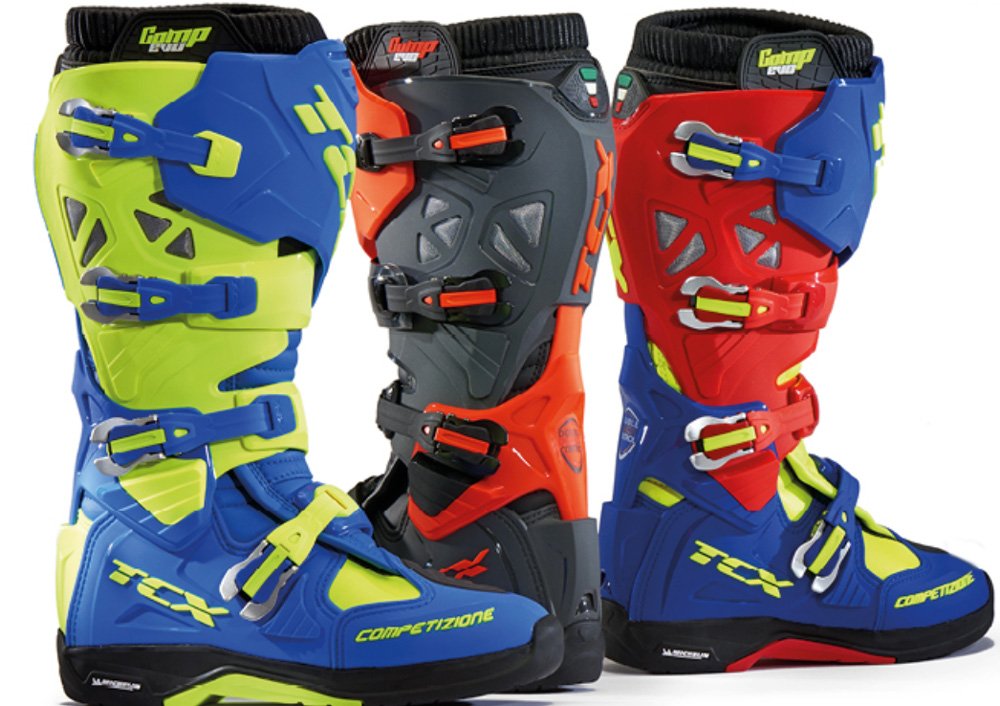 If the TCX is to be judged just as the motocross or competition enduro boot it is intended to be, then it would score a straight five across the board. It’s well made, comfortable, appropriately priced and will keep your feet as safe and supported as anything else on the market.

In terms of wider use in the adventure and trail market, the boots have some drawbacks, notably their price when compared to the market leading Sidi. Similarly, although they are not bad at keeping out the water, they cannot hold a candle to a genuine dual sport boot. MX boots are not waterproof.

If, however you are in the market for a top of the range boot that will protect your feet and allow you to take on anything from technical rocks to flat out Dakar style piste, then the TCX Comp Evo Michelins may well be the one. 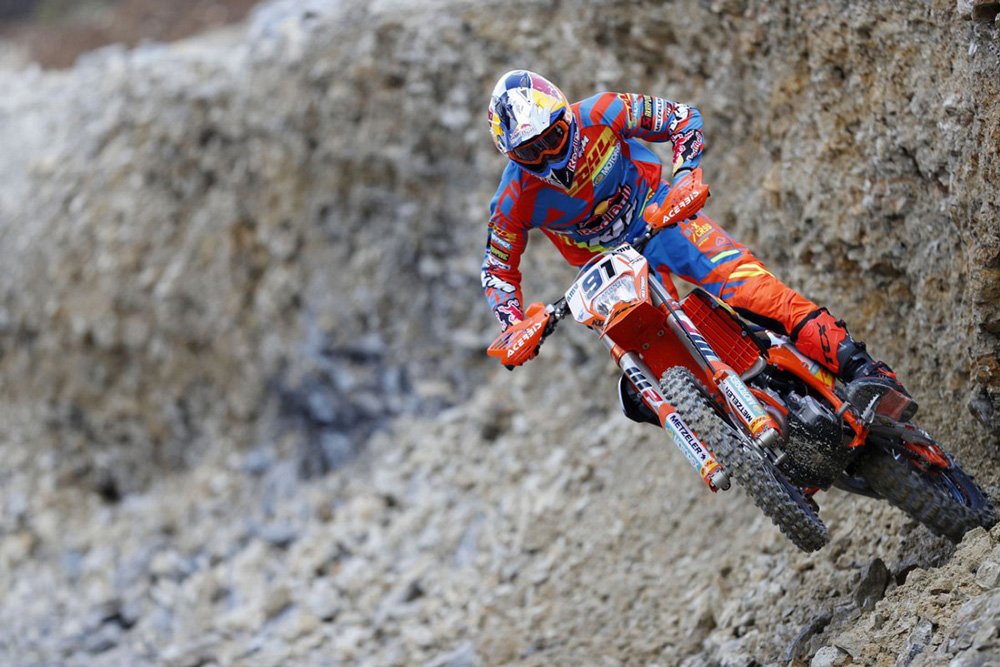 THE HARDER YOU RIDE, THE MORE THE TCX COMP PRO MICHELIN MAKES SENSE

Do you wear TCX boots? Let us know what you think of them