They are skulls of people of a different race with which no further acquaintance has yet been made in this country. What this race was, the writer was not able to show at the time of the publication of the report in 1902. Two possibilities suggested themselves at that time: One, that the crania represented some non-Indian people who preceded the Lenape about Trenton the other, that they might be crania of later intruders — or immigrants — into that region. The former theory could not be accepted without further proof, and the immigrant idea seemed hardly plausible, for the Delaware valley had been settled largely by Swedes, whose cranial type is radically different. On the whole, there are very few localities known, in Europe or elsewhere, where normally very low skulls had been observed.

The quest in literature, however, had a result which may come very near a definite explanation of the enigma. In 1874 Virchow" reported a number of extraordinarily low skulls mainly from northwestern Germany, from the Elbe to the coast of Holland, drawing attention at the same time to several " Batavian " specimens and others of the same nature the islands in the Zuy- Zee that had been pictured or described previously6 All of these skulls were comparatively recent, the oldest not dating beyond about the ninth century of our era. The majority ranged in form from to in capacity, from 1,215 to 1,700 c. c. ; and in vertical height," from 12 to 12.85 cm. Several of the skulls showed a depression of the base the majority were free from any indication of a pathological condition. Virchow recognized these skulls as constituting a distinct cranial form and called the type . He thought he recognized it in some Dutch paintings. As to its significance, he was undecided.

The foregoing accounts, which do not seem to have been followed by any additional observations of importance on similar material, establish the presence in parts of northwestern Germany and Holland in or up to recent times of a cranial type characterized by precisely the feature which renders so extraordinary the skulls from Burlington county and Riverview cemetery, namely, very low height. The cephalic index and the capacity of the European show a wide range, which easily includes the same characteristics of the Trenton specimens. The facial measurements are lacking in the German reports, but Gildemeister speaks of a narrow face, a feature marked also in the two skulls from New Jersey and one of the latter, it will be remembered, shows a trace of basal depression, such as noticed in a more pronounced degree in some of Virchow's low crania. The illustrations of the European (see figures 5 and 6) show remarkable general resemblances to the two Trenton skulls — there the same the rounded outline, without sagittal elevation, of the anterior and the posterior plane, similar shape of the superior plane, and similar aspect of the face. There can be no doubt of the relationship of the two forms, and it now remains to account for the occurrence of identical forms in regions so remote from each other. That such marked similarity of any two normal, important, extreme, and repeated forms in cranial morphology could be of accidental origin has never been demonstrated, and, in fact, is not conceivable.

This type, though not as yet known with all the detail desirable, in at least one important character, from the rest of the whites on one side, and all features from all the Indians of whom there is any knowledge, on the other. In view of these facts, the conclusion is unavoidable that close kinship exists between the European and the New Jersey specimens. 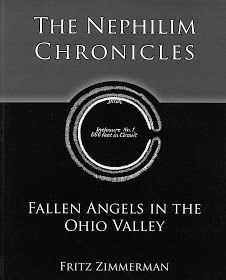 Did I Mention I Love Halloween?

Alentejo The Hidden Gem Of Portugal

Subscribe to The Nephilim Chronicles: Fallen Angels In The Ohio