The Best Music Festival in the USA

I just got back from Electric Daisy Carnival in Las Vegas. My second time in a row attending Insomniac’s flagship electronic Music Festival.
Check out my complete EDC Survival Guide for first timers!

Review: Davy Knowles ‘What Happens Ne…
Best Home Sauna To Stay Warm All Wint…
Best Slots You Can Play at Online Cas…
and my BuzzFeed article how to Festival like a PRO
EDC Las Vegas has a lot to live up to. It’s the biggest, most extravagant electronic Music festival in the US, and up there with Tomorrowland (Belgium) in terms of electronic music zeitgeist dominance.
But does it live up to the hype?? Is it the best music festival the United States have to offer?? FUCK. YES.
EDC is the best music electronic music festival in America, hands down. In fact, for me, it is the best American music festival period.
Last year was my first time attending EDC Las Vegas and I had such an incredible time. This year cemented my love for this festival. I honestly walked away having enjoyed one of the best weekends of my life.
It’s hard to put into words what makes EDC so special, but god dammit I will try.

EDC IS BEST MUSIC FESTIVAL IN THE USA

I’ve been to a lot of music festivals, and the crowd at EDC Las Vegas are the friendliest by a mile. They are kind, inclusive and super fun. Unlike other festivals, you only go to EDC if you really love electronic music. So you are surrounded by like-minded people all there for the same reasons as opposed to other festivals where some people are there to be seen, or only beach their friends where going or just to see one single act etc. 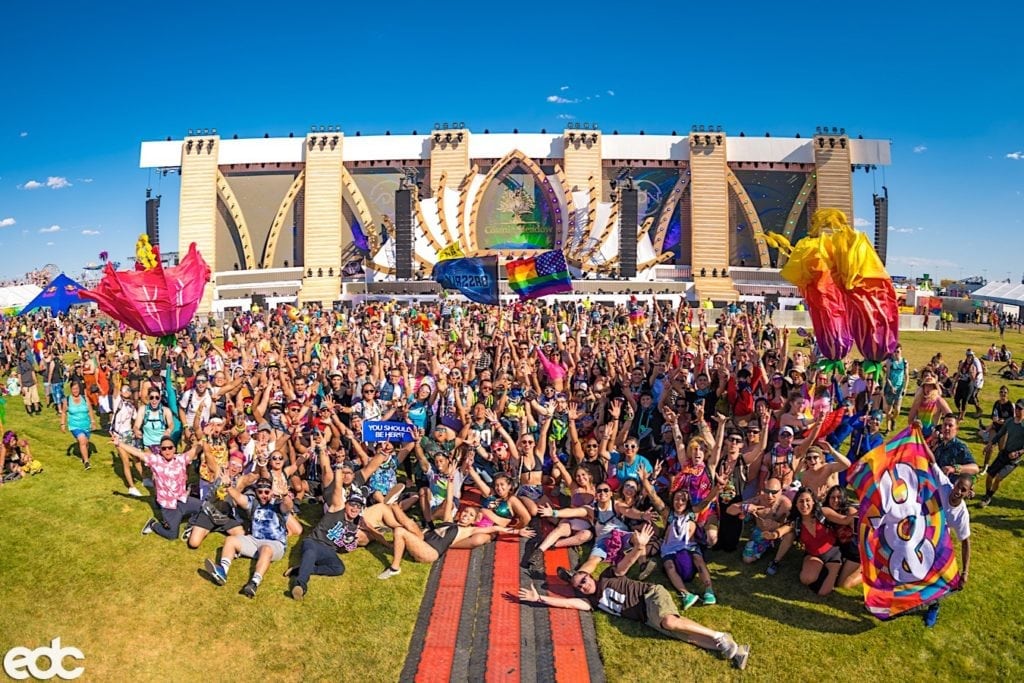 One of the reasons the crowd is so welcoming is because of rave culture. For anyone on the outside, a rave might sound dirty, scary, intense, aggressive or all of the above. In reality, it’s the complete opposite. Most die-hard ravers follow the rave philosophy of PLUR:
Peace
Love
Unity
Respect
There is no better mantra to live by when at a music festival. No judgment, no hostility, only openness, love, and inclusion. Not only is this rave philosophy practiced, it is constantly demonstrated with a special ‘handshake’ ritual with complete strangers. The handshake ends with swapping of ‘kandi’, homemade rave style bracelets which for some can carry great significance and meaning. Connecting with a stranger in this way is a very grounding, ego boosting and deeply satisfying experience, like someone proverbially telling you that you are awesome, and making your friendship official in a legal contract.
The PLUR handshake can be instigated after knowing someone all night, or only after 10 seconds, from just catching someone’s eye. It’s obvious when the time is right, you both will know it. 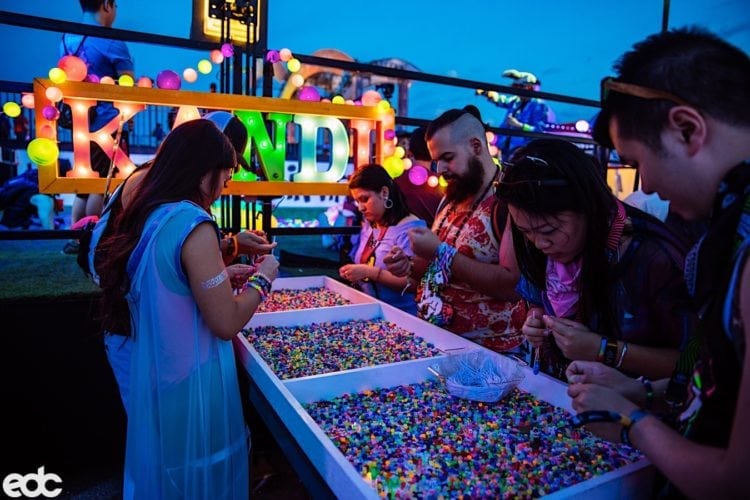 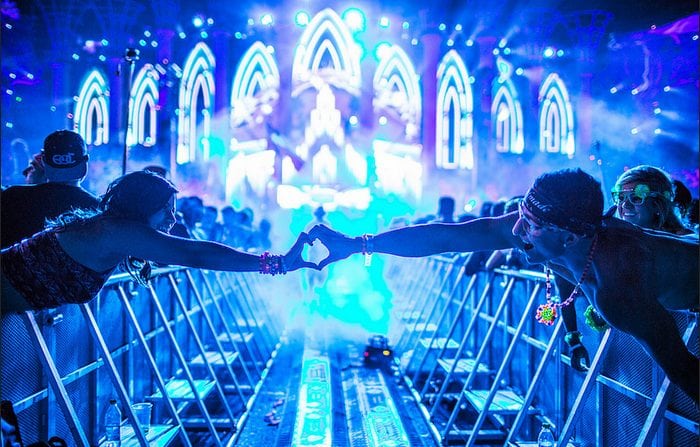 Oh man. There’s a reason it’s called ‘Electronic Dance Music’. A rave is a ritualistic experience, and dancing is a big part of it. Again, at many other festivals, you’ll find patrons standing still listening to the music, or signing along bobbing their head – which is fine, not all music needs to be danced to. Here, at EDC the dance moves are extracted from you, willingly.
Everyone dances.
And everyone dances HARD.
It’s unsurprising in a community based on PLUR, people dance how they want to dance with no shits given, and there’s nothing more invigorating or attractive. The dancing here is primal, it’s real. 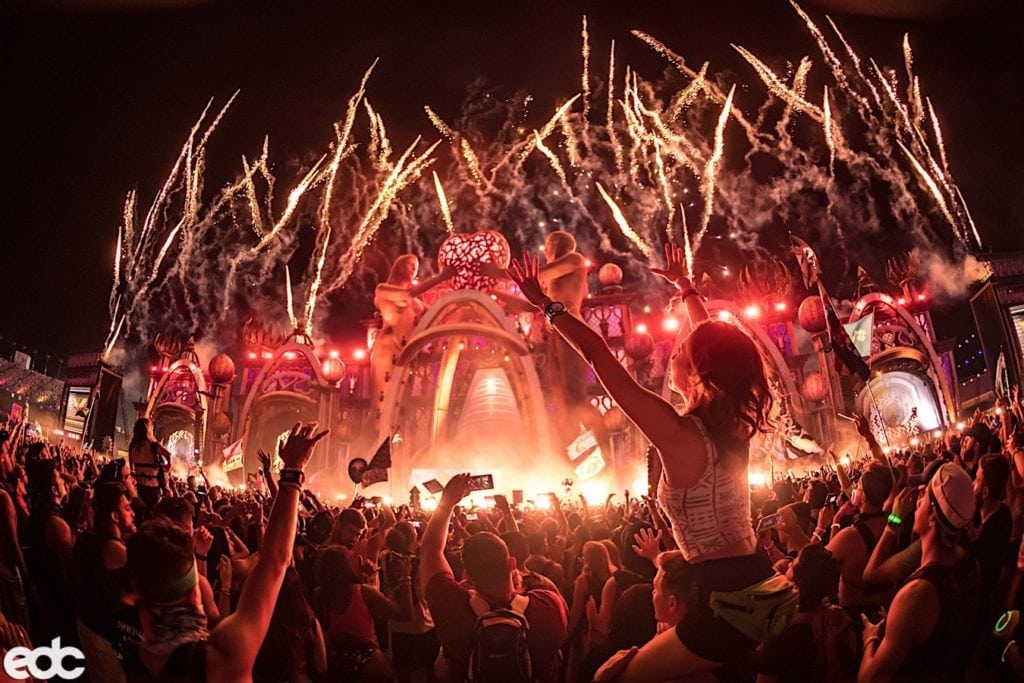 Dancing isn’t the only way to express yourself. The outfits at EDC are next level.
Taking place in Las Vegas, the music festival is pretty hot, which gives festival-goers the freedom to wear as little as they want. And by to they exploit that freedom! Your rave outfit is just another extension of yourself, or who you choose to be for the night. And you look however you want because remember, no one is judging you. They are too busy losing themselves in their own dance shapes. 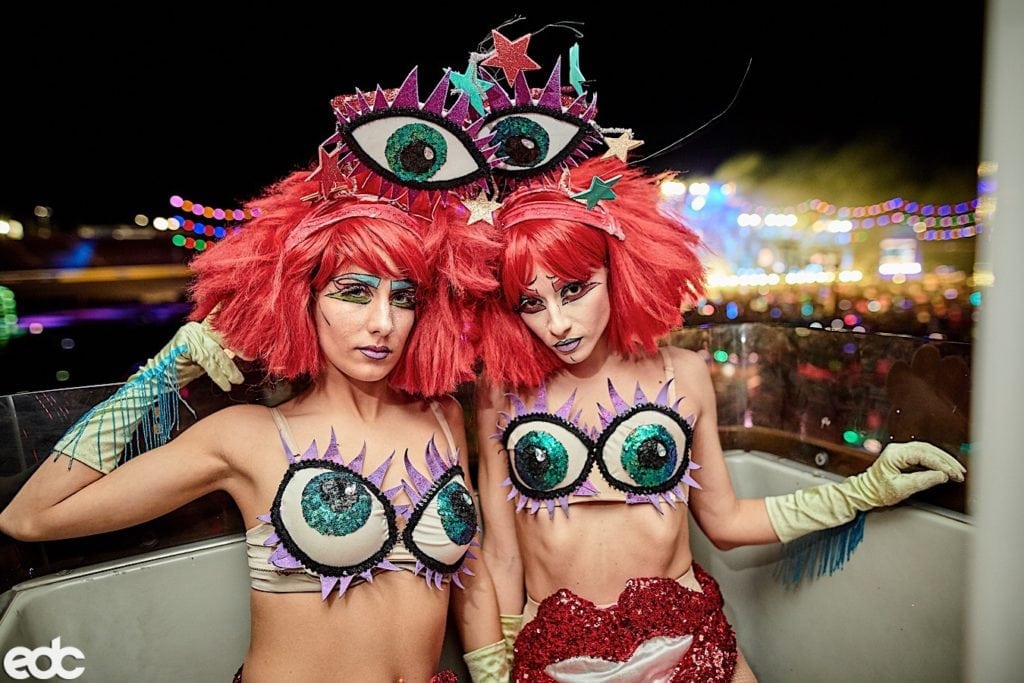 Sure EDC is a highly commercialized rave. A festival of this size has to be. But Insomniac does right by the fans and outs a lot of money into making the festival a complete euphoric onslaught on all your senses. Each stage has a different, unique design that could stand alone as its own festival. The lighting and pyrotechnics are world class and never stop surprising.
Every night at 1:30pm there’s an incredible firework display down the entries length of the festival grounds. This fireworks display puts most countries New Years Eve fireworks displays to shame… And they take place every night at EDC.
Insomniac doesn’t stop there. There are multiple moving art car stages that turn into full-blown parades, with hundreds of dancers, musicians, Cirque de Soleil style performers, and even an entire marching band. 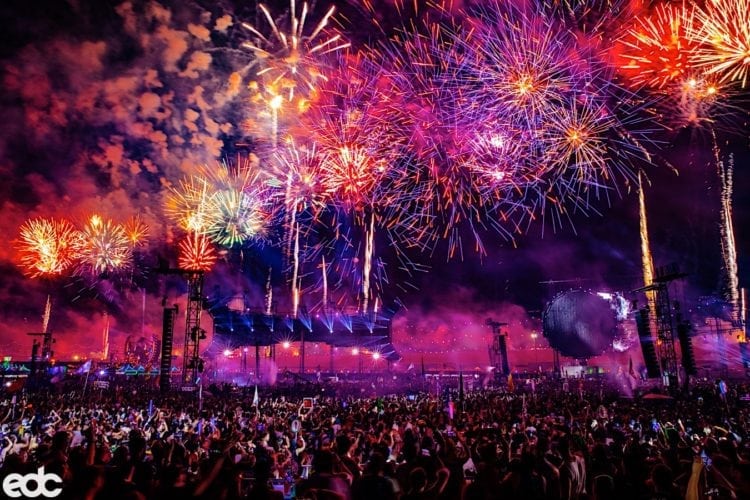 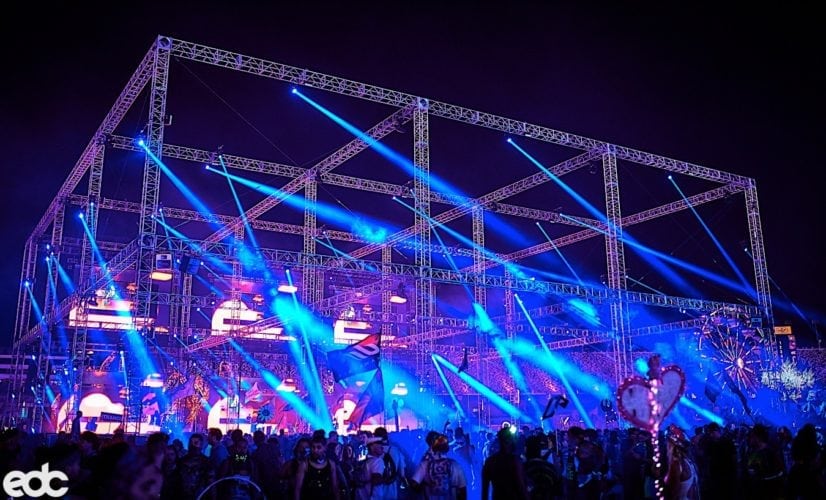 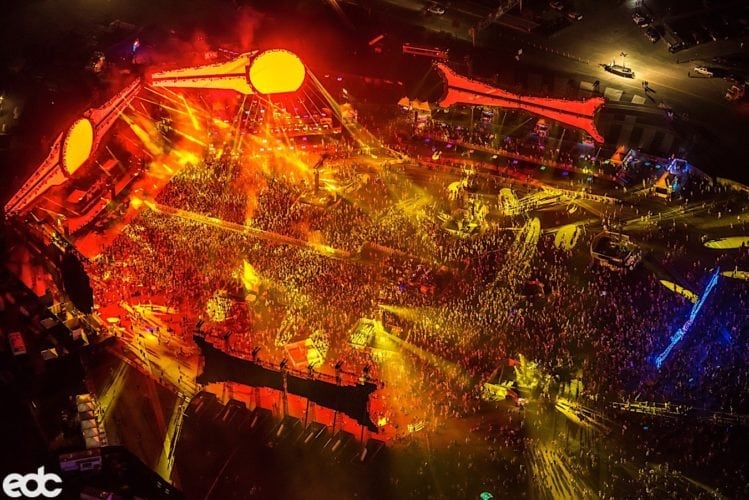 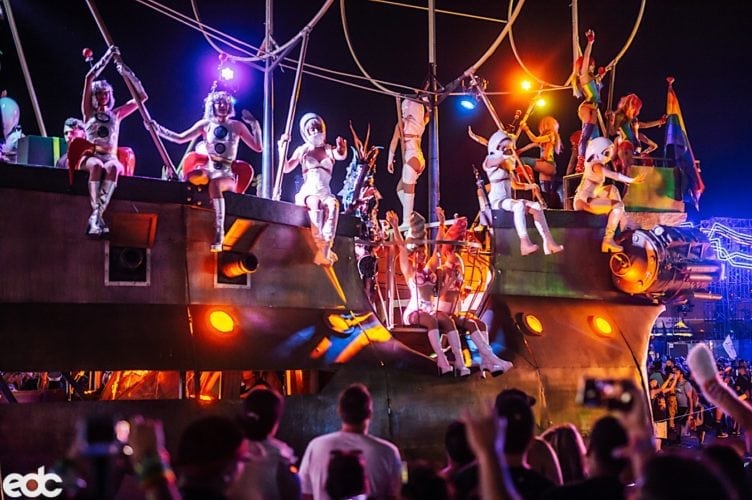 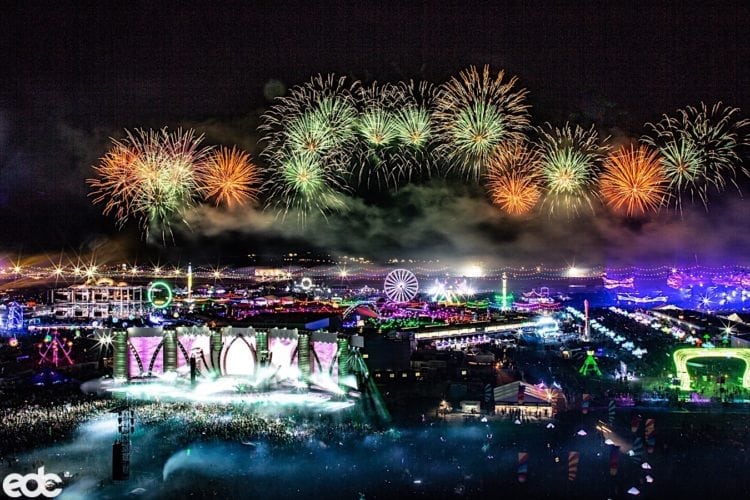 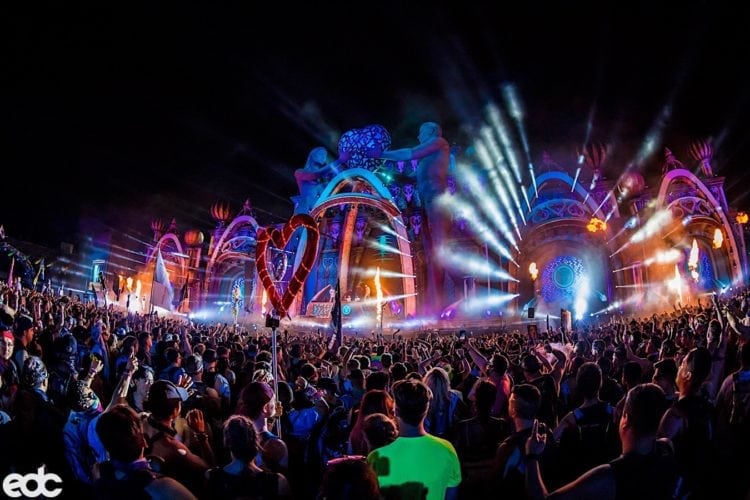 Even if you took out all the music stages, and just left the rides, you’d still have amazing Carnival to explore. There’s plenty to see and do, even without the world-class DJ’s the play all night long. 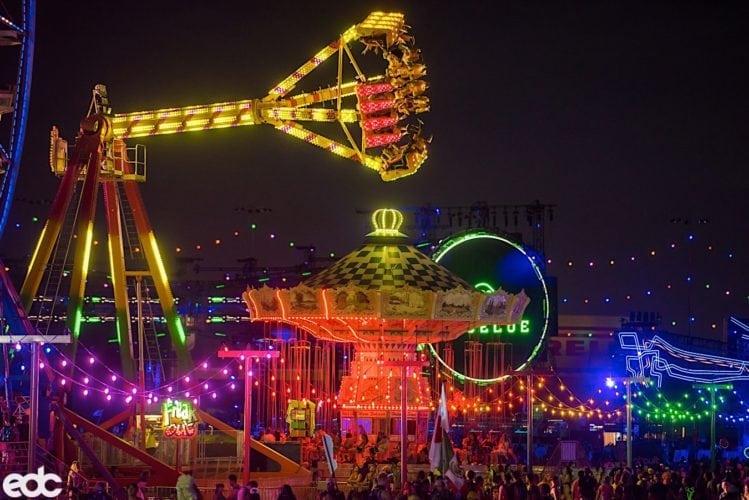 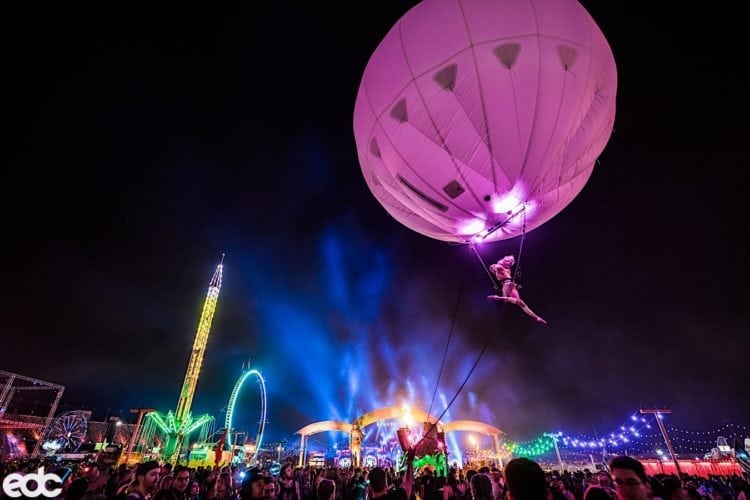 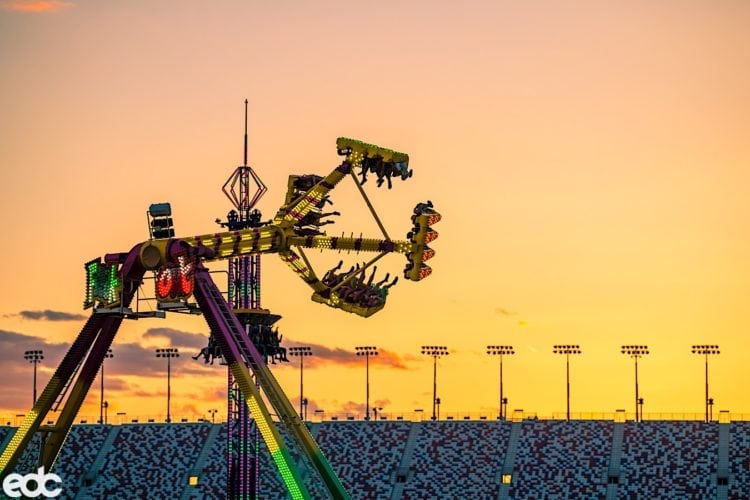 It goes without saying, that every year the Electric Daisy Carnival lineup is STACKED.
Insomniac doesn’t follow the usual format of listing its lineup with the biggest artists first, because there are just too many megastars to list. The lineup is formatted alphabetically. This year’s biggest acts included Kygo, Zedd, Kaskade, Pendulum, Afrojack, Diplo. Marshmello, Tiesto, Slushi, Post Malone, Martin Garrix, Hardwell, Eric Prydz and Armin Van Buuren.
In fact, there are no conventional headliners at EDC. As they reiterate in all their marketing materials YOU are the headliner.
This way of thinking permeates through every facet of EDC. This festival does everything they can to focus on the fan experience. 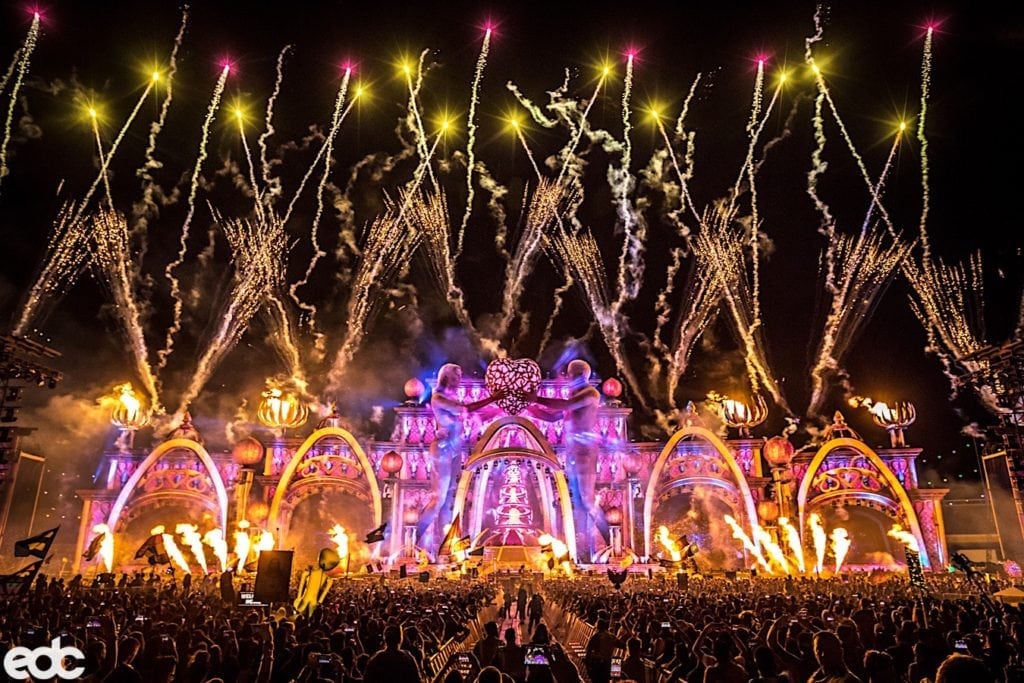 THINGS I LEARNED AT EDC

It’s the best festival to be by yourself
You will meet the friendliest people in the world.
You can last longer than you think.
7pm – 7am is nothing when you’re having the time of your life.
You are never too old to rave.
I’m 31 and still love it.
Always bring Kandi
Did I fucking stutter??
Will you be going to EDC Las Vegas 2019? Use this hack to book Las Vegas Hotels for half price, or use this trick to get three nights for only $150! 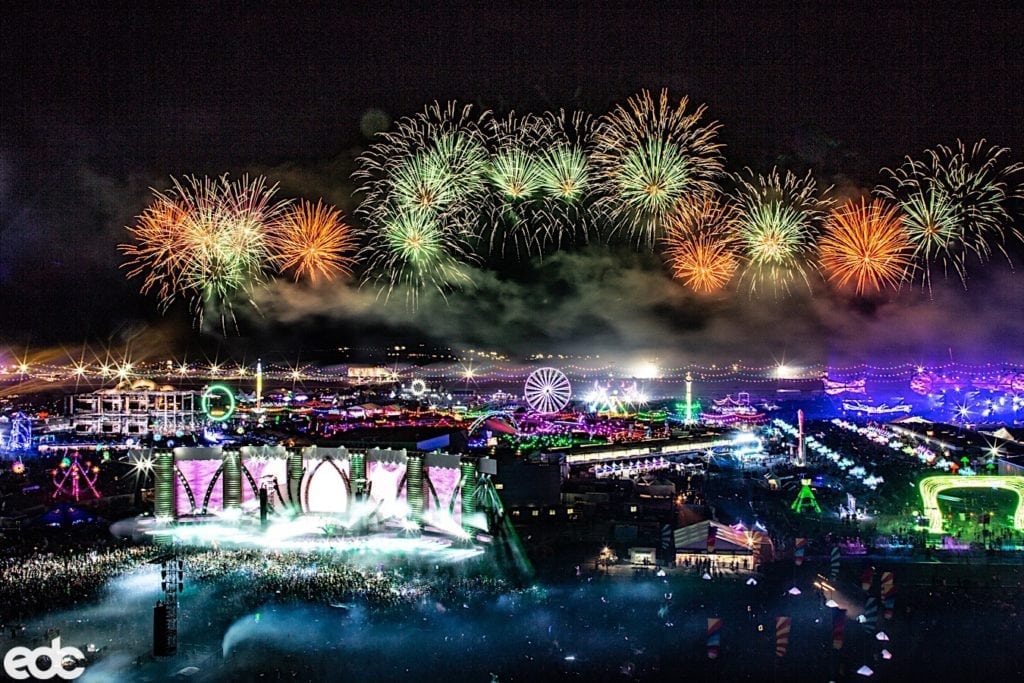 WHAT IS YOUR FAVORITE MUSIC FESTIVAL?

Let me know it the comments below!

The post The Best Music Festival in the USA appeared first on The Cheeky Traveler.

This post first appeared on The Cheeky Traveler, please read the originial post: here
People also like
Review: Davy Knowles ‘What Happens Next’
Best Home Sauna To Stay Warm All Winter
Best Slots You Can Play at Online Casinos

The Best Music Festival in the USA