When you think of a British music festival, images of mud, cans of beer, anoraks and passed out naked people come to mind. No? That last one is just me? Riiiight..

But what if I told you it doesn’t have to be this way. Imagine if there was a festival with the beautiful sunny weather, set in lush green ground surrounded by palm trees and full of gorgeous tanned music lovers who actually showered that morning. 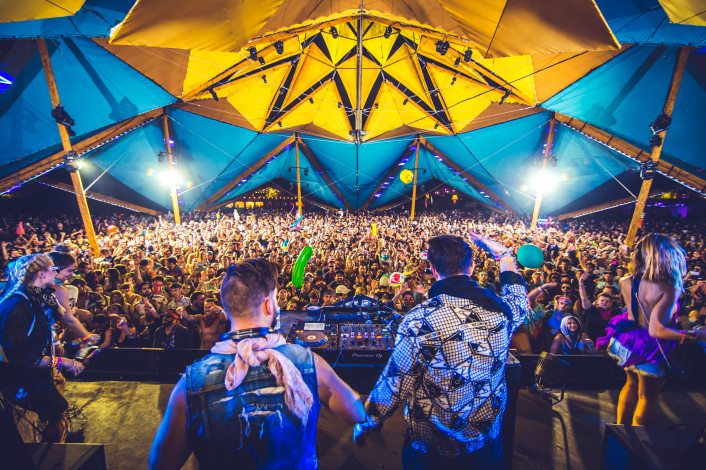 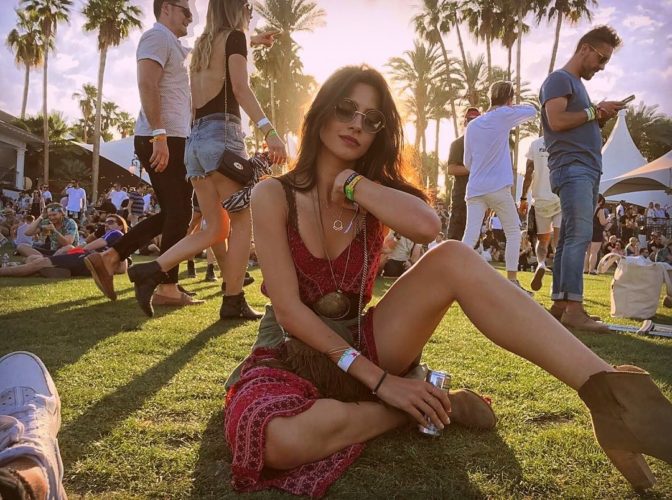 Actually, you don’t need to imagine it, it already exists and it’s called Coachella. The Coachella Valley Music and Arts Festival takes place every April at the beginning of the American festival season in Palm Springs, California. This Festival is so popular that it takes place twice, over two consecutive weekends. With the first weekend kicking off in just 3 weeks, it’s about time we laid out the facts on Coachella.
Also – no anoraks to be seen.

Coachella has become one of the most famous music festivals in the world, hosting the biggest names in music. With 8 main stages, you’ll find all types of genres to please even the pickiest of music fans. Everything from old school rock and indie to pop, hip-hop, and electronic music. 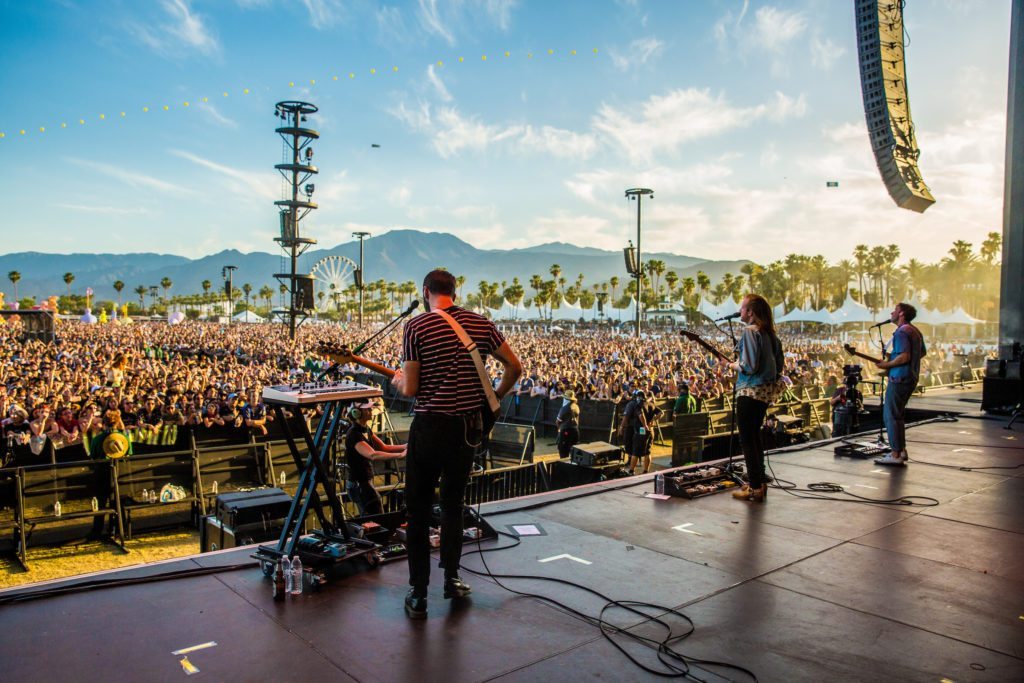 The 2017 headliners were Radiohead, Kendrick Lemar, and Lady Gaga. This year The Weekend, Beyonce and Eminem will lead the show. The lineup always comes out in January just before the last batch of tickets is released. The actual schedule of who is playing on which stage and when comes out a week before the festival. 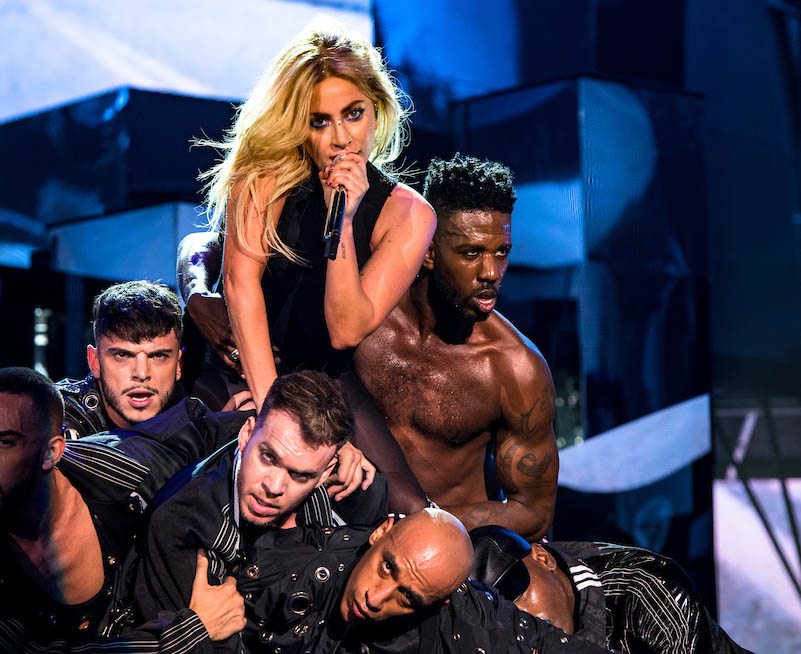 Coachella is also well known for bringing groups back out of retirement. Recent year’s lineups saw the reunions of Outkast, Guns ’n’ Roses, LCD Soundsystem, Pulp, Rage Against the Machine, Faith no more and Pixies.

See the Coachella 2018 lineup at the bottom of this post

First things first, Coachella isn’t in Palm Springs, it actually takes place 35 minutes away in Coachella Valley. Totally makes sense right. Coachella Valley is a two and half hours drive from the nearest major international airport in Los Angeles(LAX). Whilst you can fly into Palm Springs the cost doesn’t make it worth it for most people. The best option is to fly directly into LAX and then either get a shuttle to Palm Springs or rent a car for the weekend and make the journey yourselves.

Oh boy. I’m not going to lie to you, getting tickets is hard. 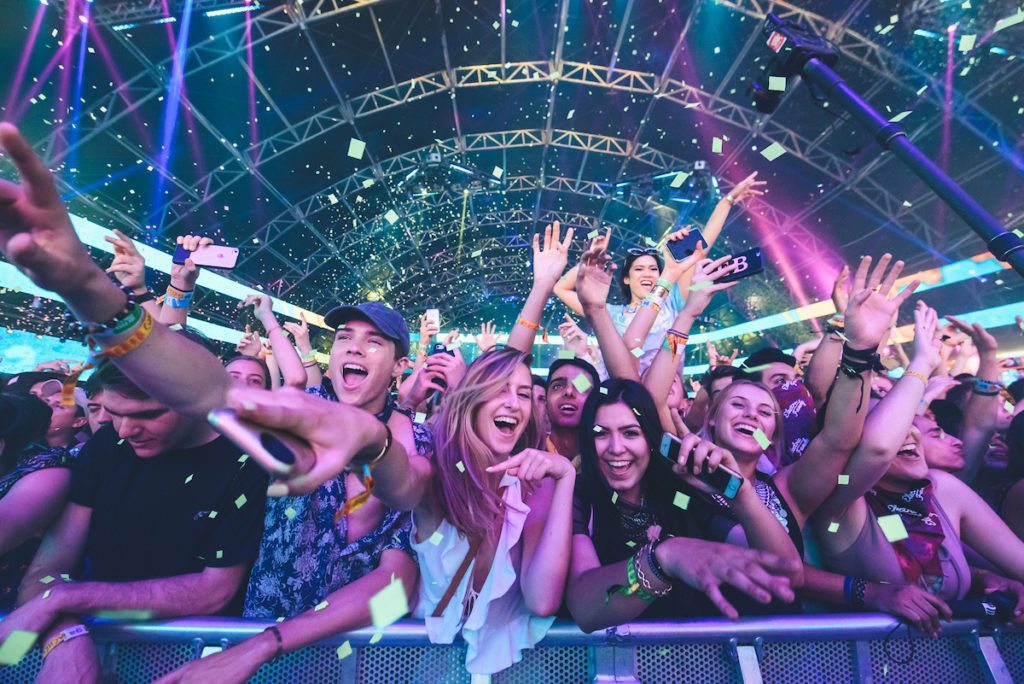 Tickets come on sale twice a year. The Advance pre-sale is always sometime at the beginning of June. It’s hard to say exactly but about 75% of the tickets are released during this pre-sale. Weekend One tickets sell out within an hour and Weekend two within two hours. The remaining tickets are released the first week of January, and these tickets sell out even faster. This means that if you decide after June that you want to go to Coachella the following April, you have one shot in January to try a snag one of the last few tickets available. Fortunately for you, I’ve written a step by step guide on how to guarantee yourself Coachella tickets when they come on sale in June and January every year, over at my blog The Cheeky Traveler. Coachella 2018 GA tickets cost $429 and VIP tickets cost $999.

Do not fear, there are other options! The secondary ticket market is awash with Coachella tickets, however, for these, you will have to pay a premium. StubHub currently has GA ticket’s listed for $677 and VIP tickets starting at $1450 (including all fees). Stubhub has amazing customer service and even has a station set up at Coachella for any issues that may arise. The authenticity of the tickets is guaranteed. If StubHub is a little pricey for you, your next stop is eBay and craigslist. If buying from outside the States, eBay is your best friend as they have customer protections against fraud. If you live in LA, try craigslist for the best deal – however, be wary of scammers!

If the camping experience is as important to you as the music itself then you are in luck. Coachella has multiple on-site camping options. Camping at Coachella is a lot more organized than British festivals with pre-reserved spots that you can park your car right next to. Whilst camping is the cheapest accommodation option at $113 per camp spot, it is not necessarily the most comfortable. In fact, you most likely will have the opposite problem to British Festivals – it can get very hot as soon as the sun comes up. The average peak temperature in April is 30 degrees Celsius, and it is not uncommon for temperatures to reach the 40s during the day. 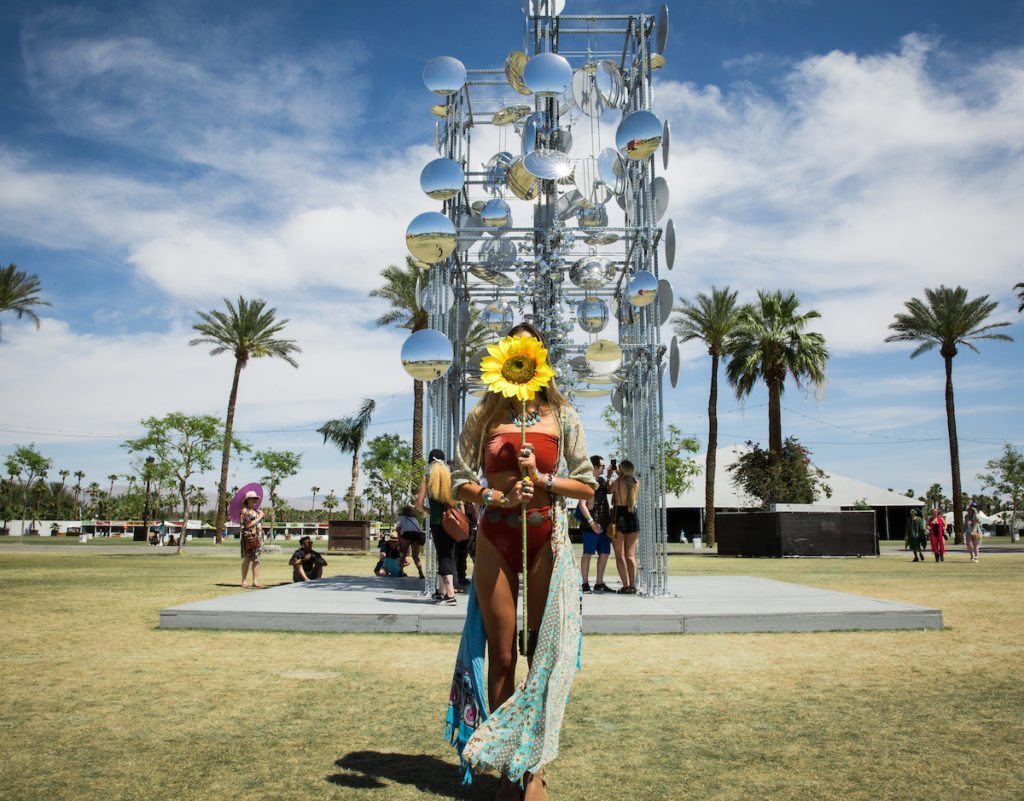 For a more glamping experience, exclusive teepees can be reserved next to a private lake with the El Dorado packages. Starting at $2458 the packages for two people include two GA Passes along with private porta-potties and showers. If you really want to take it up a notch, Luxury Safari tents are available starting at $8,500 for two people. Safari package come with a special ‘guest pass’ which offers all sorts of exclusive access a step above VIP but not quite ALL ACCESS. The tents also come fully furnished with air conditioning and a private concierge.

For those of you in need of a comfy bed, a cool room and just a sprinkle of wifi, off-site accommodation is available for all budget levels in the form of motels, hotels, and houses. Most motel and hotel rooms can accommodate up to 4 people. Spitting the bill four ways makes the rooms much more affordable. The two weekends of Coachella are the busiest times of the year for the area, and as such even the cheapest motels start at $300 a night. On the higher end the Desert Springs JW Marriott, a 5-star resort starts at $700 a night, which split 4 ways is still a lot more affordable than that any of the glamping options. Festival shuttle passes are available for $75 that covers all transportation to and from all the major hotels in the area.

For big groups of 8+, it can also make sense to rent a house for the weekend. Like the hotels, there is a wide range of houses available near Coachella Valley. The ones closest to the Festival in the La Quinta area are going to be considerably more expensive than the options a little further out in Palm Springs. Houses start around $5000 for the 3 days. The more upmarket options that make you feel like you’re in a commercial for California will cost $15,000+ for a minimum rental of 4 days. Prices can be a little cheaper for Weekend 2, for a full breakdown of other differences between the two weekends check out my post Coachella Weekend 1 vs Weekend 2.
When looking at off-site accommodation, Palm Springs is the furthest you want to be from the festival. Any further away and Ubers start to get really expensive and the festival shuttles don’t get that far.

When people think of Coachella one thing springs to mind, celebrities. Being only hours away from the entertainment industry’s mecca, Los Angeles, Coachella is full of recognizable faces as well as young Hollywood types looking to ‘express themselves’ through fashion and what I assume is some sort of experimental pagan dance. Basically going to Coachella has become the ‘in’ thing to do, and when thing’s become cool all the brands follow. 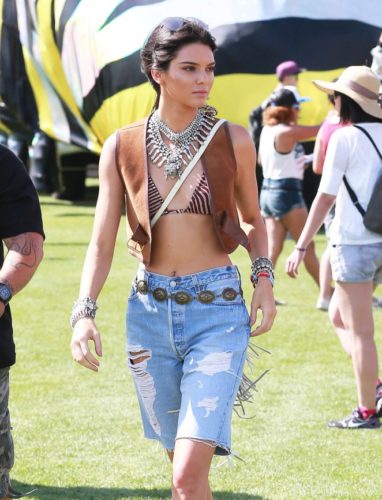 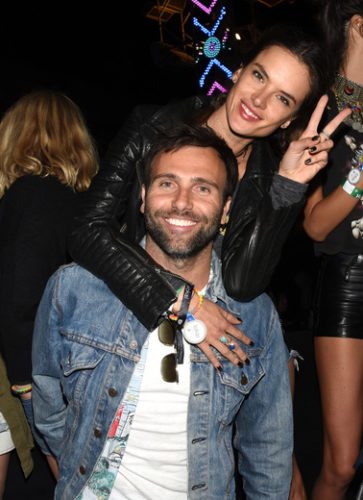 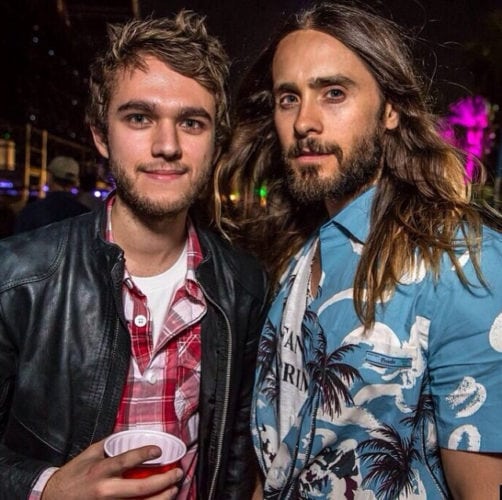 Zedd with Jared Leto
Wanting to get some of that Coachella magic to rub off on them, brands host pool parties before and during the festival as well as incredible after parties for those not wanting the night to end. In fact, some people come to Coachella just for the parties and don’t even attend the festival. After parties are as much a part of Coachella as flower crowns – Yes, they are still a thing. 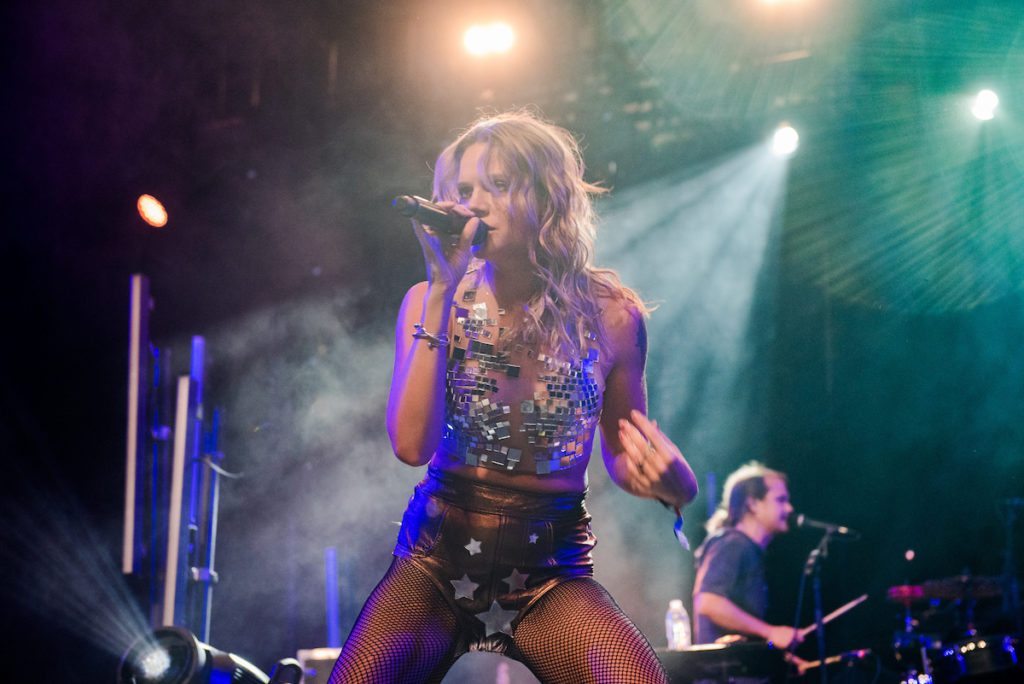 Tove Lo doing her thing
Most of the parties are free as long as you can get on the guest list, which I’m not going to lie to you is a hard thing for out of towners. Closer to the festival lists of all the major parties will appear online, reach out to the organizers and see if you can get an invite. See if any friends know a guy who knows a guy. Promoters also sometimes advertise on Facebook or twitter so check there as well.
Your best bet is to know someone in LA who can help, and if you don’t know anyone, meet someone! You’re at Coachella having the time of your life, make friends and go on adventures, you never know – you may end up at the biggest party of them all, Neon Carnival which takes place on an airfield, Surrounded by the likes of Leonardo DiCaprio and Justin Bieber(yes really) with free drinks and carnival rides, it will be sunrise before you know it.

And then you do it all over again.

Were you at Coachella 2017?? What was your FAVORITE moment? Hit me up below 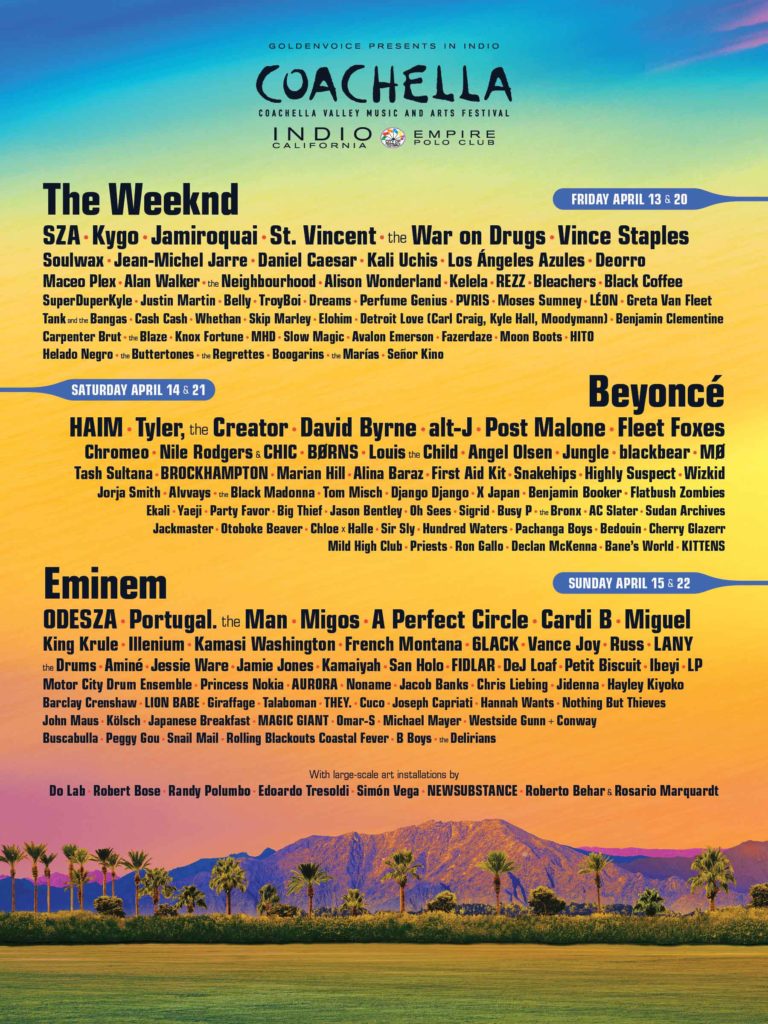 This post first appeared on The Cheeky Traveler, please read the originial post: here
People also like
Keep You-ing You
Sgubhu 2022 Songs & Mixtape
Madame Tussauds Museum, San Francisco
Easy Peasy Weekends: Get Your Regency High Kicks on a Weekend in Bath
Smith Rock Ranch Pumpkin Patch: Get in the Spirit of Fall
The Time I Got Scammed For A Puppy
Nice hold further talks with Arsenal flop Pepe over a return to Ligue 1 on loan