If you are reading this then you most likely haven’t been to EDC Vegas before.
CONGRATULATIONS.
Your first EDC is special, it’s sacred. But it can also be a little intimidating.
Don’t let it be! Before I went to EDC Vegas I did a deep dive on Reddit. EDC is alive and well on Reddit! Like most things found on Reddit, EDC is one of those subjects that has a lot of in-depth, actionable advice for anyone about to attend their first EDC.

‘Hey, let’s hold an outdoor Music Festival in Vegas.” Cool.
‘Let’s do it in July at the height of Summer.’ WHAAAAAAAAT&^^$#%$&%?!
Spoiler Alert, Vegas is hot. Seriously, this year it was 115 degrees in the day and at night never dropped below 90 degrees. 90 FREAKING DEGREES. Thank god the festival is held at night and thank god it’s dry and not humid. We’ve established it’s hot, so how do we handle this.
CLOTHING
First of all dress appropriately. This means wear light loose clothing, or the least clothing as possible. I mean this IS a rave, isn’t that half the point?! Also, a bandanna or scarf of some kind, this is still the desert, and it can get dusty.
AIDS
If you have a bag or big pockets, I would definitely suggest bringing a fan, either electric or an old style handheld one(you can buy pretty cool looking fans that can actually enhance your EDC outfit). You can also bring spray misters. These can come in handy if you find yourself suddenly overheating in the middle of the crowd because, oh I don’t know, you’re having the best time of your god damn life! 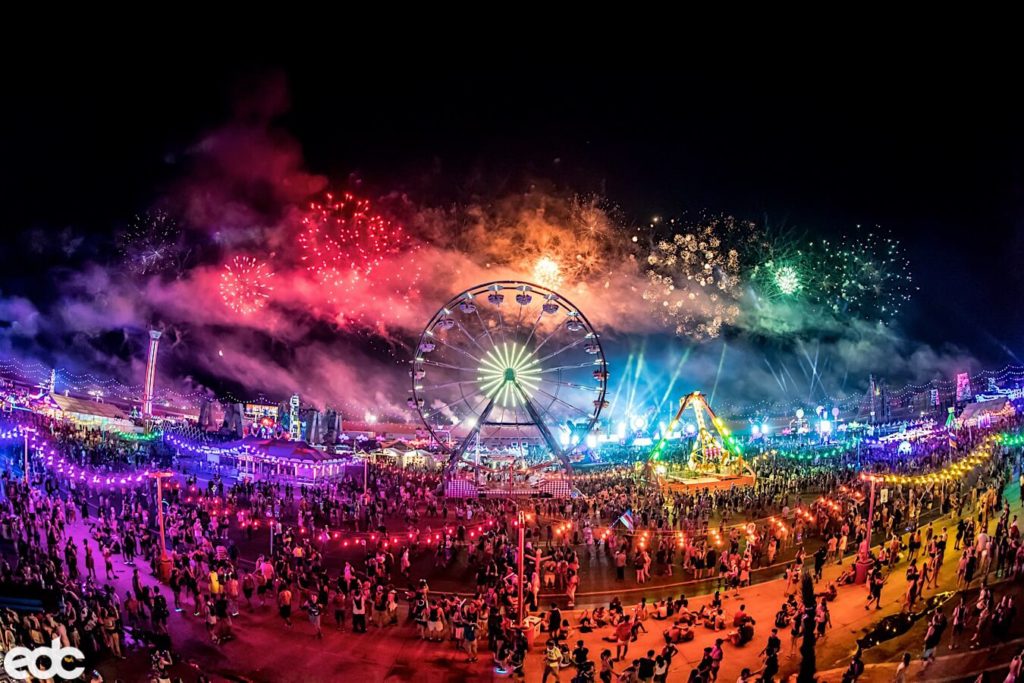 WATER
Staying hydrated is the most important piece of advice I can give you. Bring outside in the dry heat for an extended period of time drains you of essential fluids faster than you think. Add to that drinking, dancing, and other fun stuff and you have the makings of a good old-fashioned stroke. Most people living a normal life already operate at an under-hydrated state. If you are ever thirsty, you are already very dehydrated. One of the best ways of combating EDC dehydration is by pre-hydrating before the festival during the day. That way you won’t be playing catchup at 2am and constantly running to the bathrooms missing your favorite sets. Once at the festival, there are water stations for refilling everywhere. This year, you never waited more than 10 mins max to fill up your bottle with free water, so there’s no excuse. Either bring your own water bottle – has to be empty upon entry, or buy one for $5 inside and refill that. Camelbaks are also a great option and allowed.

After the first night of EDC, I woke up to my friend not in his bed but on the balcony, in only his boxer shorts, wearing a newspaper for a hat as he rocked back and forth muttering ‘the lines, the lines’.
I’ll never forget those eyes.
Yep. The lines can really be that bad. Historically they are always worse on the first night and get better, as the organizers tweak the system, and the festival goers figure out when the bottleneck times are.
WILL CALL
Avoid having to go to Will Call by buying your tickets in advance. In 2015 the line for Will Call was 5 hours long. This year it was only about 30 mins, but as will call is at the Mirage Hotel on the strip, with parking etc the whole ordeal will still take you an hour and a half.
SHUTTLE PASSES
Shuttle Passes are still your best bet in getting to the festival in good time. On the first night, we made the mistake of ditching the seemingly huge shuttle line to take an Uber. Our Uber took us an hour and 40 mins. Ultimately we would have gotten there at about the same time as the shuttle(which we had already paid for). But Ben, wasn’t it nice to sit in an air-conditioned UBER instead of standing in line for an hour in the scorching Sun? First of all, shut up, this is my blog, who do you think you are!? And second, in theory…..yes. Because if you take the shuttle, once you get to the speedway, you are straight in because security already checked you back in the shuttle line. If you take an Uber or any other form of transportation, you still have to get in line for security at the Festival. This took us another hour.
Leaving the festival at 4 30am, we were also greeted by an hour and a half line. 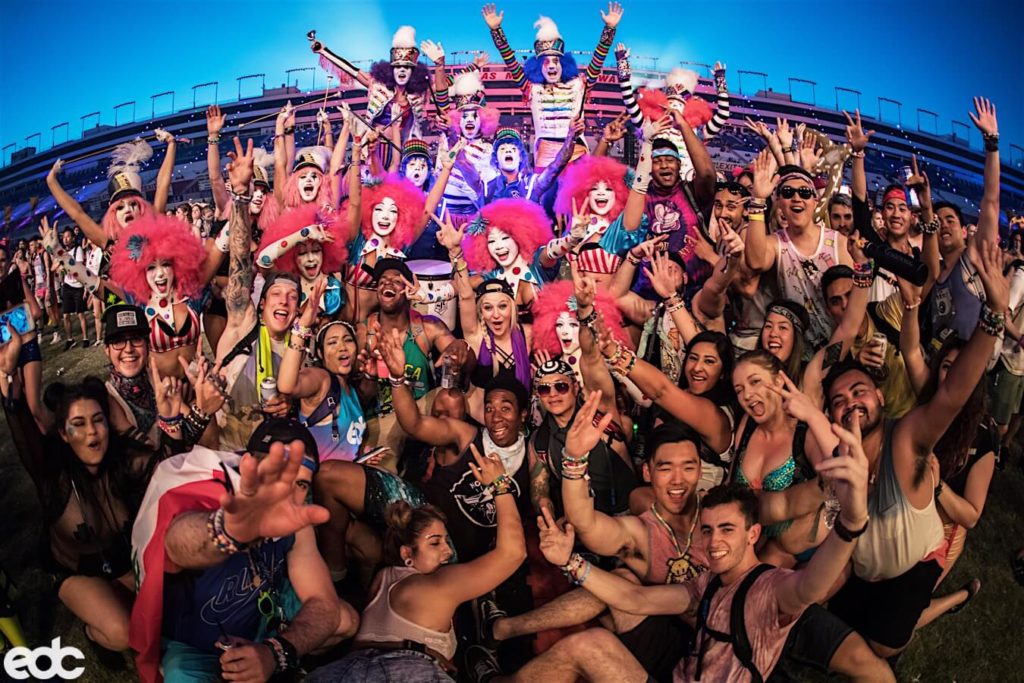 Look at all those new friends!
My friend losing his mind doesn’t seem so crazy now huh? Well it turns out Insomniac, the festival producers didn’t think so either and this year they are mixing it up. Usually, the festival starts at 7pm with artists playing as soon as the doors open.
This year, they are opening the Cosmic Meadow stage much earlier with what they are calling the ‘pre-party’. Gates will open at 3pm with the pre-party starting at 4pm. The opening ceremony which usually takes placesbetween 10pm-11pm will also take place much earlier at the pre-party. This new schedule aims to fix the bottleneck situation with the shuttles by staggering guests entrance to the festival.
Cheeky Tip:  the shuttle lines are too long, at this point you can get an uber home, which will most likely be around $50. Possibly your best option, especially if split between friends.
RIDES
If you want to do the rides, the earlier the better, hour wise and day wise. The lines get longer as the night goes on. Better yet do them on the first night before everyone realizes on the last day they NEED that ferris wheel selfie – it’s a great selfie, not gonna lie.

What would a good EDC survival guide be without advising you how to actually physically survive EDC! EDC starts at 7pm(earlier if you hit the pre-party) and finishes at 7am. 12 hours of partying is a lot during the day, let alone during the night and messing with your sleep cycle. Now I don’t expect you to be the first ones there and last ones to leave every day(if you are then a solid hat tip to you sir/madam). However to give yourself the best chance of completing all three nights without difficulty, here are some tips.
STICK TO THE FESTIVAL
Vegas is fun, but Vegas is vegas anytime of the year, EDC comes but once a year my friend. Don’t waste time, energy and money partying in the day on the strip or at the pool parties. If you do, you will wear yourself out, and be poorer for it. Use the daytime to catch up on sleep, get a good meal(or two) in and refuel on water and electrolytes with some gatorade. Your body and brain will thank you later on in the night. So many people don’t make it the full 3 days at EDC because they went too hard on the Vegas Strip.
COMFORTABLE SHOES
It’s in the name, Vegas Speedway. 90% of the music festival is asphalt covered payment. If you dance anywhere near as much as I do(send vids

), you’re going to want to wear shoes with decent support(maybe even special insoles if you need them. You may not feel it on the night, but your feet will thank you the next day. 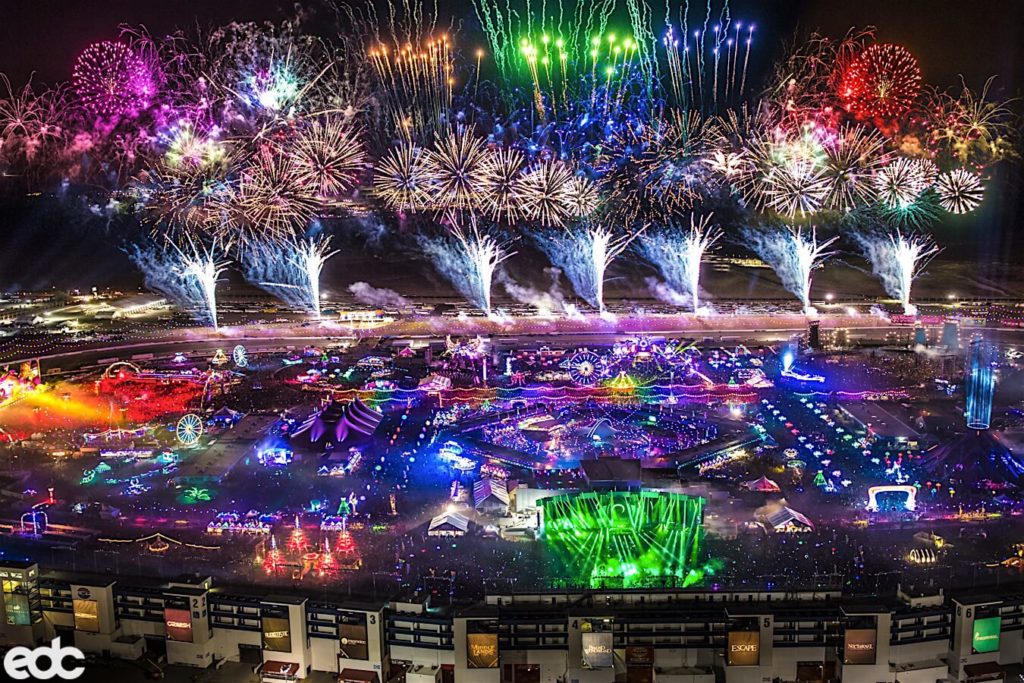 EDC compound from Above. It’s BIG.
TAKE BREAKS
It’s a long night, and as an EDM festival, it’s not like you get breaks with some ‘chill’ bands. You’re at a RAVE for heavens sakes. That being said, know your limits. Don’t be afraid to take breaks and chill out for a bit. There are numerous areas where you can sit, lie, sleep, refuel and recharge before you rage, yet again.

PHONE
Like every other festival ever, cell phone signal is awful at EDC. Not only will constantly searching for signal drain your battery, but your texts could take hours to send if they send at all. Receiving texts from a friend saying ‘where are you?!” when they’ve been dancing next to you for the past 30mins is not only confusing but suuuuuuper creepy. To avoid unfortunate instances like this, end each text with a time stamp so your friend knows at what time the message “see you there in 10 mins” was sent. There are also charging stations dotted around so make sure you bring a spare phone charger in case things go south.
MEETING SPOTS
Make sure you have designated spots around the festival to meet either at certain times or in case you and your friends lose each other. Make these places as specific as possible. and make sure you actually go there first so you all are thinking of the same place. It also helps to take the time on your first day at EDC to walk around the grounds, so that you get a feel of where everything is. Make sure you also grab a paper map and have a picture of the map on your phone(saved in your photos, not online).
MONEY
Bring credit/debit cards as well as cash. A lot of the water bottle stands only accept cash, and usually, if you are getting a drink from them you are either in a rush or desperate. Just like the cell phone signal, the wifi at the grounds is also terrible and sometimes the vendors iPad credit card readers can’t connect. Cash is a good back up.

LOCKERS
If you have a lot of stuff, get a locker, It’s a long night, and you are going to be dancing a lot. If you have an elaborate costume you may even want a change of clothes, and a locker is a great place to store your shit.
EXTRAS
Totems are a great way to keep track of your group. Compared to other music festivals EDC is pretty well played out but a totem always helps. You’ll see plenty of super cool totems around, why not get in on the action. Eye drops, lip balm, lotion all help to keep you from getting to dry. A travel size deodorant is recommended a good idea for the sake of others. 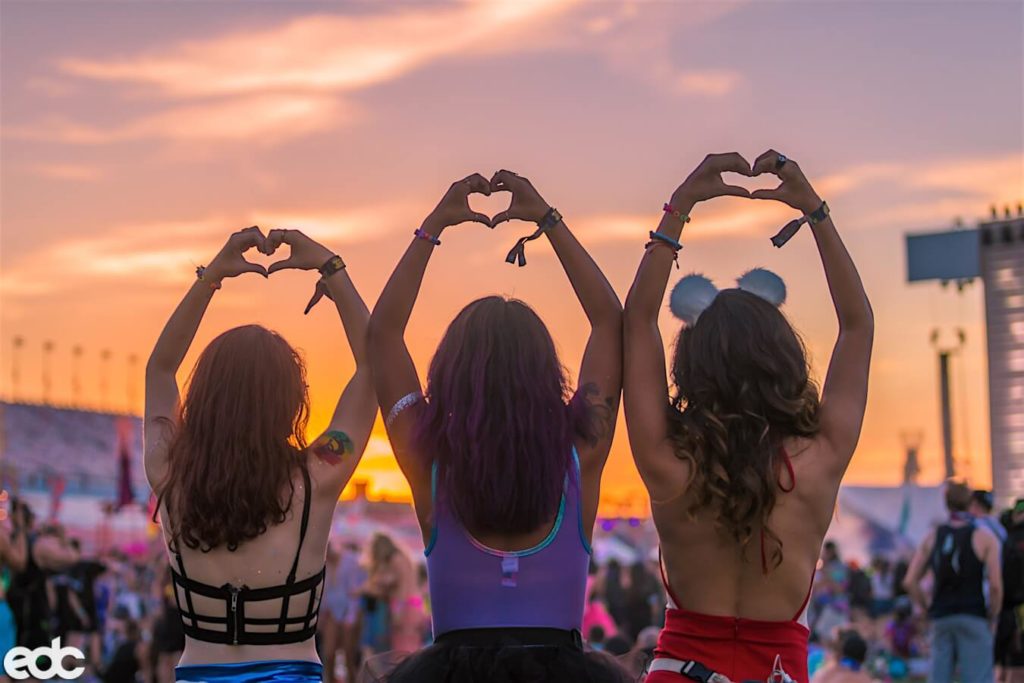 EDC is truly a magical, life-changing event. You will make memories and friends here that you will carry with you the rest of your life. There is so much to see and experience, you can’t possibly do it all. EDC has the best production value of any festival in the world.
However, to get the most out of EDC, you must be OPEN, leave your baggage at the door and live in the moment. The crowd at EDC is the most inviting, friendly and open crowd of any festival. Very rarely do you get to be with 130,000 people who all share the same passion, the same excitement to be there, and are ready to let loose and see the best electronic acts in the world perform the most impressive sets of their lives. Make friends, and help your fellow raver out. Follow the EDC rule of see something, say something and if YOU personally feel bad in any way, ASK FOR HELP. Safety is the main concern.
Most importantly follow the rave practice of PLUR (Peace, Love, Unity, and Respect).
Follow this EDC Survival Guide and you’ll have the best 3 days of your lives. See you under the electronic sky!
For anyone who’s been to EDC before, is there anything I should add to the list??