The biggest Castle Worldwide. A UNESCO World Heritage site Prague Castle is one of the most visited places in the capital of the Czech Republic. The Prague Castle is not the typical Castle. In fact it is very different from the most of the medieval castles that we see in Europe. The Prague castle is not formed by a single building with towers surrounded by a water moated wall and access by a drawbridge. It nothing like the classic image people have of these historic buildings.

According to the Guinness Book of World Records, Prague Castle is the largest coherent castle complex in the world, covering seven hectares, which makes up some 10 football fields! It was built in the 9th century and it is undoubtedly one of the most important monuments in the Czech Republic. It is a must visit for anyone staying in the Czech capital. The Prague Castle is not only one of the oldest castles in the world, but it is a place of spiritual and temporal power for 1000 years. It dominates the skyline, sitting majestically on a hillside in the Castle District (Hradčany).

The history of Prague Castle merges with the history of the city. As it was from that hill that the city emerged and developed. This story started in the year 880 when it was founded by Prince Borivoj and it grew until the last work was completed in 1929. It was once the residence of the Kings of Bohemia and is still today the seat of the Czech President. We (Czech) say that the history of Prague has begun with the foundation and construction of the Prague castle.

Prague Castle is in reality, a complex of palaces and churches connected by small streets and alleys and surrounded by walls in some parts. Looking down from below, many people mistake the St. Vitus Cathedral – which is inside the complex – as the castle itself. In the end, the Castle is composed by several palaces from different eras in just one space.

It has three “main” entrances. The entrance for those, who arrive from the area above the Castle Town districts: Pohorelec, Strahov and parts of Prague 6, and come to the first courtyard. Second gate is available from the side of the Ministry of Defense call the Lion’s Gate. The third way to access the Prague Castle is to walk up the stairs from Klarov area to reach the one near Lobkowicz Palace. If one walks through the Castle gardens, there are two additional public entrances. The most convenient way to enter the Castle district is from the first courtyard. As if you come at a strike of an hour or by the noon time, you can see the changing of the guards. The biggest attraction of the Prague Castle is the St. Vitus Cathedral. When you are inside the castle, you walk through several eras in time, you can find Baroque and Gothic churches as well as a Renaissance village with a modern greenhouse. You can visit museums, art galleries, gardens, old houses and churches. Even though the complex is free to visit you still have to pay to enter the palaces, churches, museums and gardens as well as to the Cathedral and the tombs of the kings. 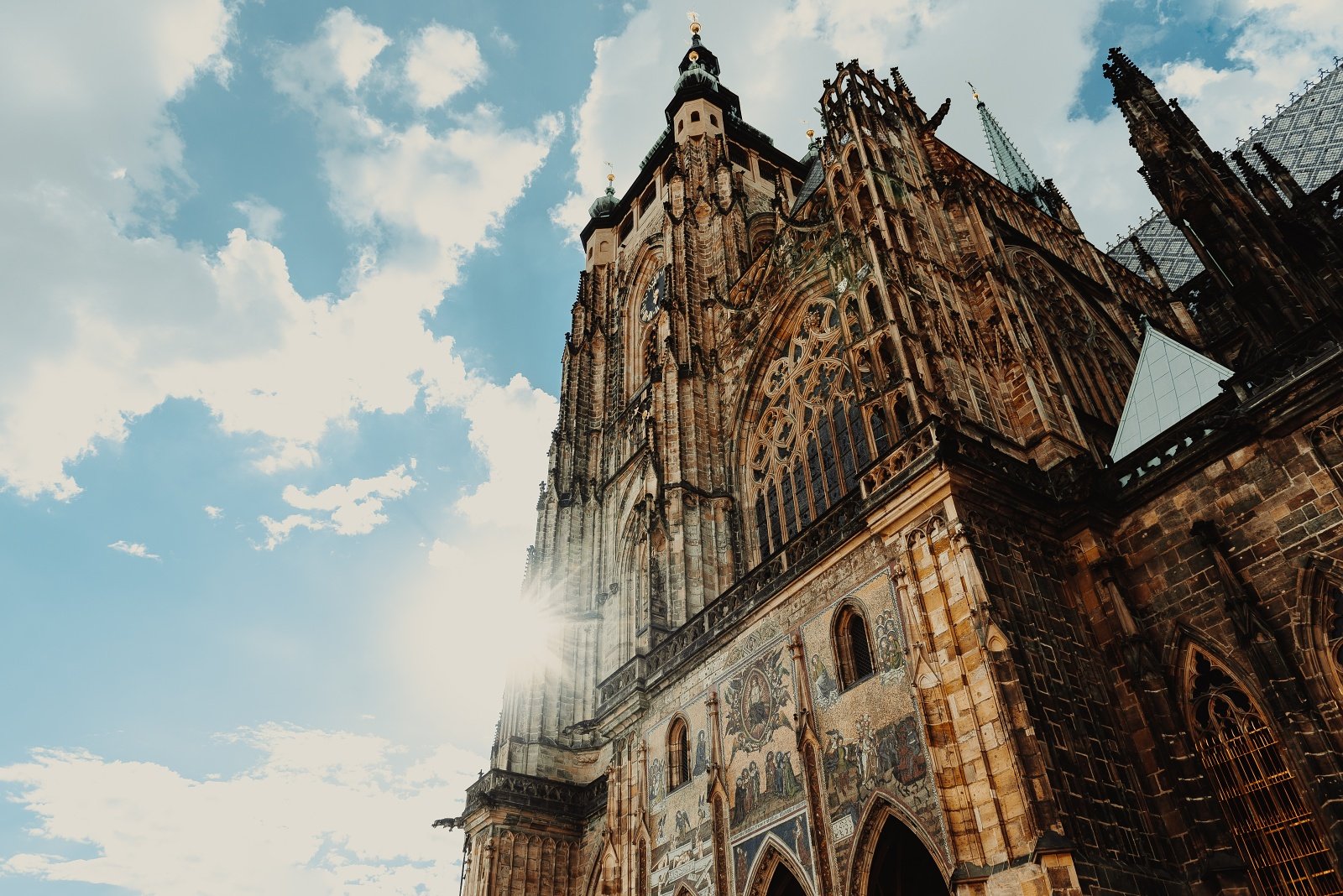 How to visit Prague Castle

Prague Castle sits atop the Malá Strana hill, impossible to miss from different parts of the city. As mentioned before, there are three entrances: one in the bottom part of the Castle, going up the slopes of Malá Strana. The other entrances can be accessed by tram number 22 that passes near the Charles Bridge and up the Chotkova Street following the Marianske Hradby street to the Lion’s Gate (Entrance 1) and further up by Jeleni and Keplerova street to Pohorelec (Entrance 2).

Tip: I recommend taking the tram and entering through the Hradcanske Namesti (Courtyard) and the 1st Courtyard access and exit through the gate near the Lobkowitz Palace, where you can easily continue the city tour down the slopes of Malá Strana. The view of Prague from there is beautiful! 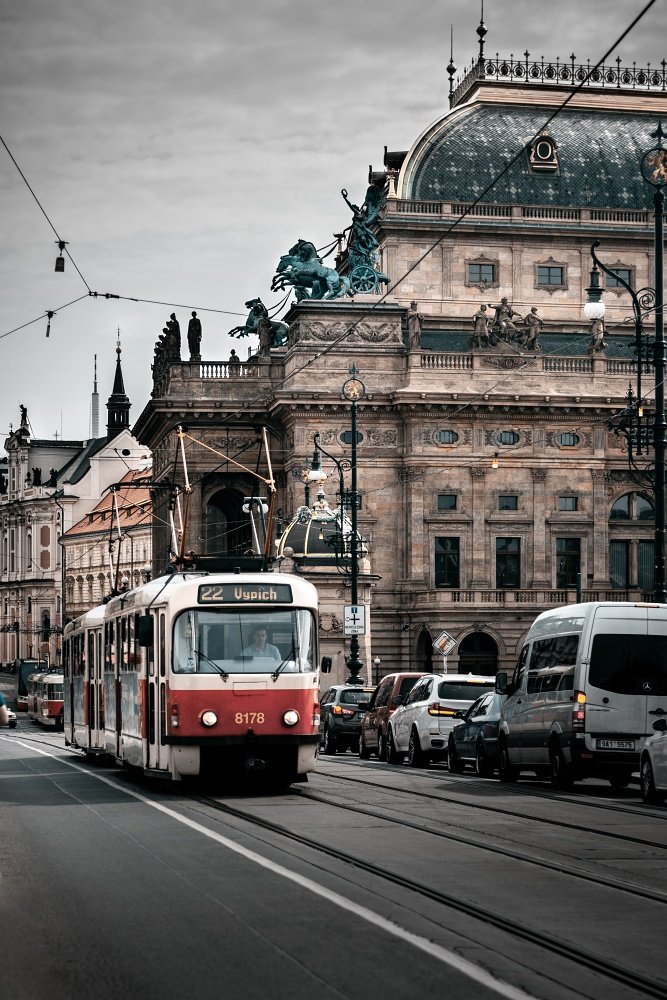 If you choose to come through the Lion Gate, you need to follow the Prasny Most (Powder Bridge in Czech) and access the first courtyard of the Prague Castle. The box offices are easily found at the I. and II. courtyards. The tours of the Castle are called circuits and you can choose what you want to see. Ideally you should allot a whole day to get to know every detail of the Prague Castle. It is a must to visit the St. Vitus Cathedral, the Golden Lane and the tombs if available.

At each entrance visitors are required to pass through a metal detector and basic search. Visitors are allowed to enter with bags and backpacks, but the search is strict. Sometimes there are long queues thanks to the security checks.

Be sure to climb up to the south tower of Prague Castle for a panoramic view of the city. If you manage to choose a sunny day for your visit, you will have beautiful photos and an unforgettable view of the breathtaking city of Prague. Also do not forget about the Prague Gardens, especially in spring and summer, they provide a great escape from the rush of the city life.

What to visit at Prague Castle?

The Changing of the Guard

When observing from afar, from the Charles Bridge for example, you will naively think that the tall dark tower is the castle. It is a typical mistake, when one thinks that that tower is the Castle. Once you get up to the Castle and you are in front of the Gothic Saint Vitus Cathedral, you will understand… The cathedral is huge, and it is worth taking a little distance to observe its greatness from afar. It is the most beautiful and imposing building in Prague. The entry to this Cathedral is part of the castle circuits A and B. The Gothic-style building began to be built in 1344 and was only completed in 1929. Beautiful on the outside and impressive on the inside, the cathedral is 124 meters long, 60 meters wide in the transept, and the ceiling in the main nave reaches the impressive height of 33 meters. Inside you will find the Chapel of St. Wenceslas with its tomb adorned with paintings and semi-precious stones, an underground crypt where the kings of Bohemia and the Crown Chamber are buried and where the Crown Jewels are preserved. At the top of one of the towers there is a lookout, and if you are in the mood, you can climb the 99 meters of spiral staircase and have one of the most beautiful views of Prague. 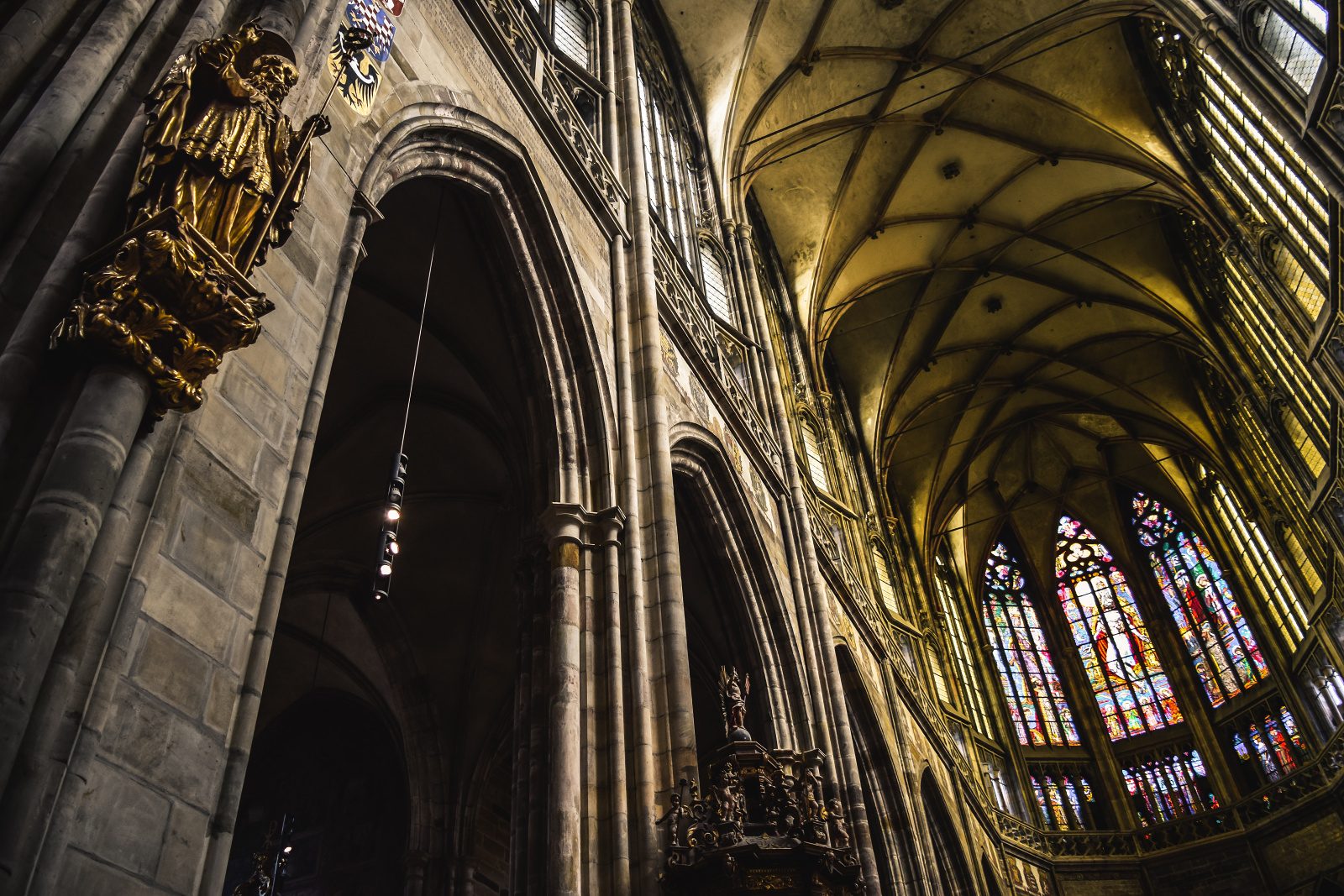 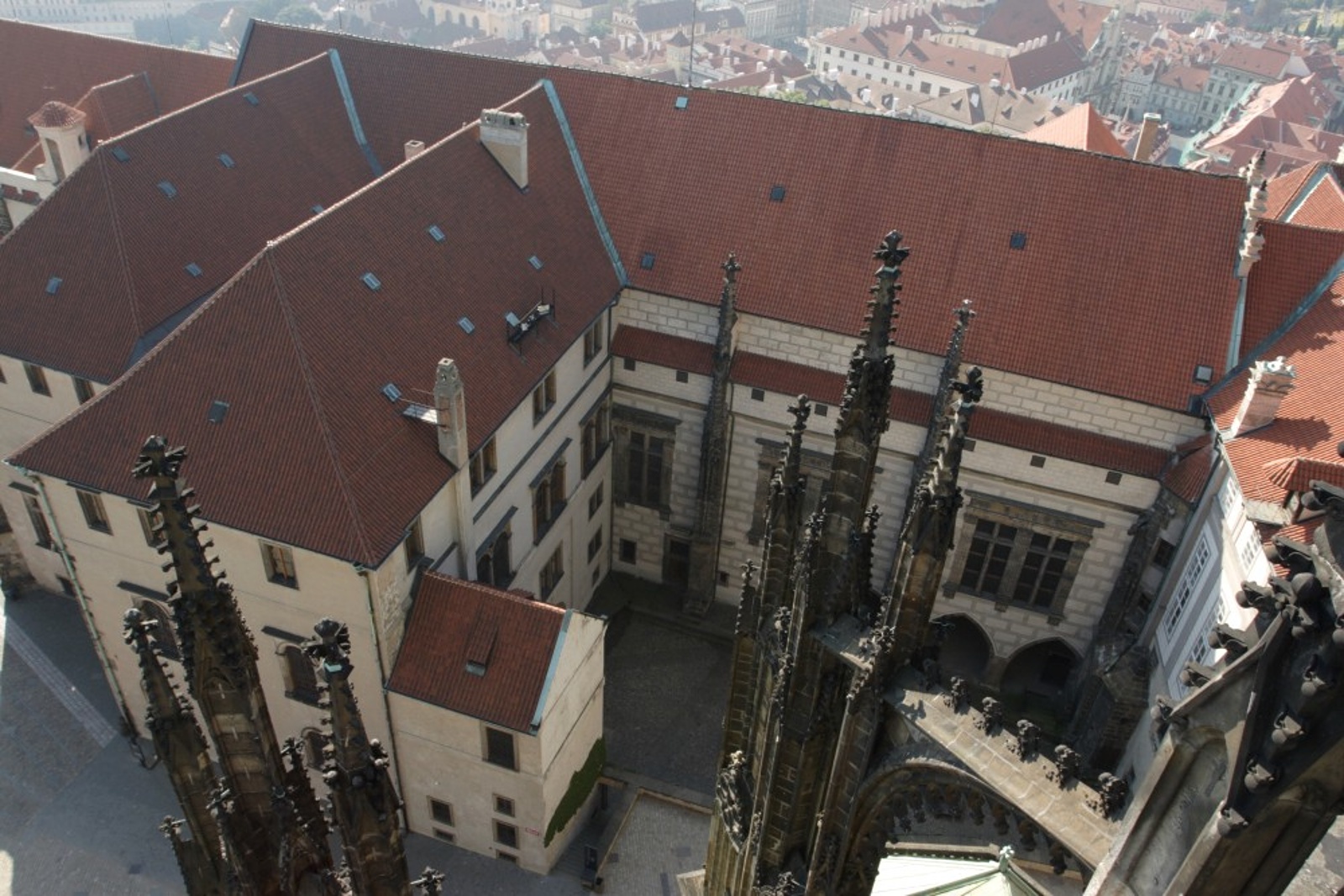 original picture at the hrad.cz

As you leave the cathedral, you will see the old Royal Palace. It was built entirely of wood in the 12th century and served as a palace for the king himself from the 13th century to the 16th century. It was the seat of the princes and kings of Bohemia. Built on the ruins of the Romanesque palace Soběslav is still used today as the venue for ceremonial state events. The most important place is the Vladislav room (in Gothic style), the largest secular room in medieval Prague (1487-1500), where the election of the President of the Republic takes place. The entrance to the palace is part of the visit to Prague Castle.

Considered one of the most important Romanesque monuments in Prague and the second oldest church in the city, it was founded around the year 920. The curiosity is that inside its architecture is Romanesque and the facade on the outside is Baroque! The two towers of the church reach a height of 41 meters. The widest south tower is called Adam, while the simplest north tower is called Eva. The visit to the interior is included in the Castle ticket. 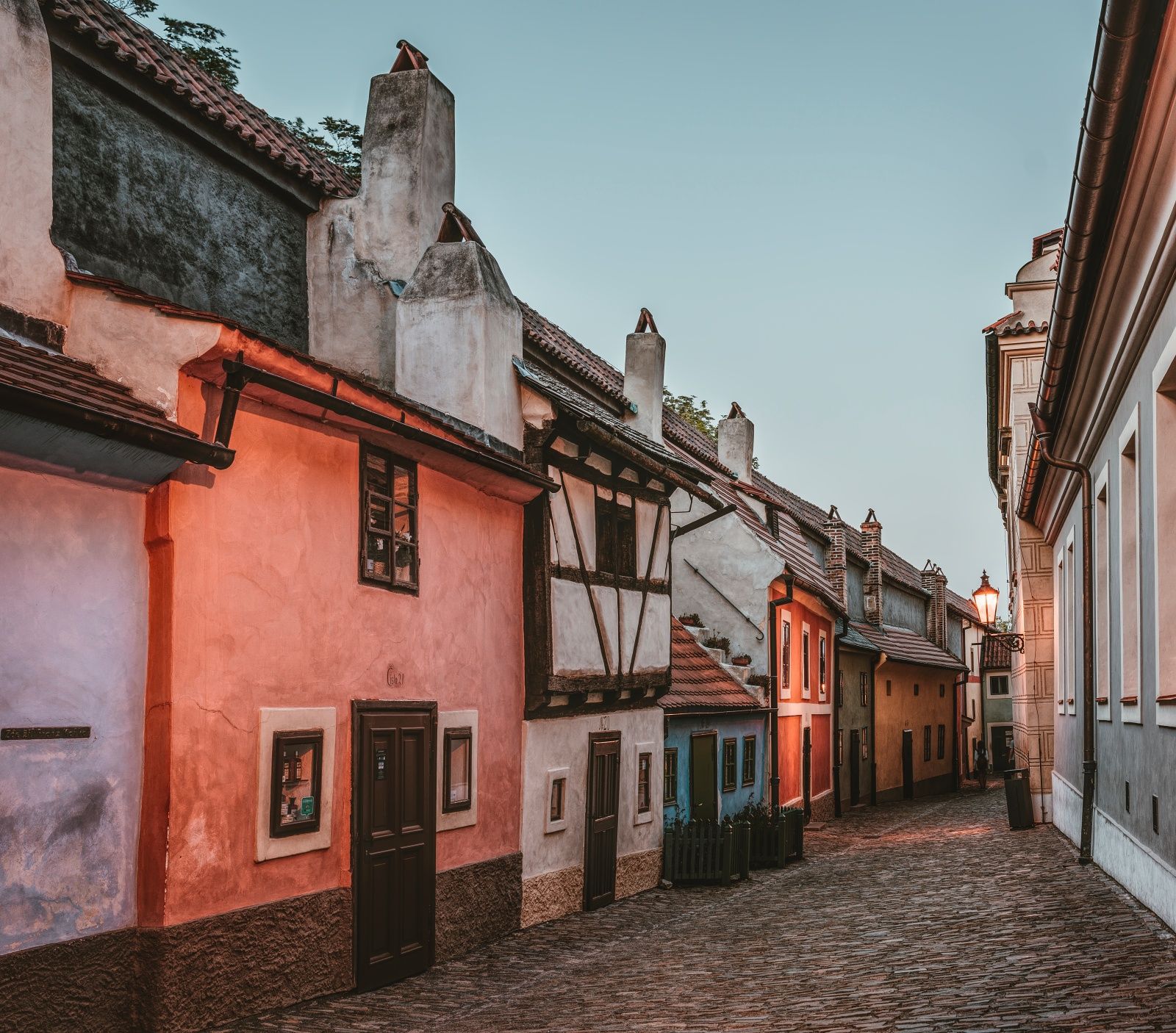 Known as Golden Lane, the English name, the Zlatá ulička it’s an alley adjacent to the castle walls with tiny and colorful houses that, according to legend, were inhabited by alchemists who worked for Emperor Rodolfo II, who wished to discover the mythical elixir of youth. This little street with old houses that were preserved and where the former artisans and people who worked in the castle, serving the royals, lived. They are houses with very small rooms that store your furniture, utensils and clothes. The first thing that is surprising is how small people were at that time. They all look like dollhouses.

Another curiosity and itself a reason to visit the place, is that Franz Kafka lived in the house number 22 of Golden Lane. Behind the houses there is a wall and inside it, an immense collection of medieval armor and hundreds of ancient pieces. 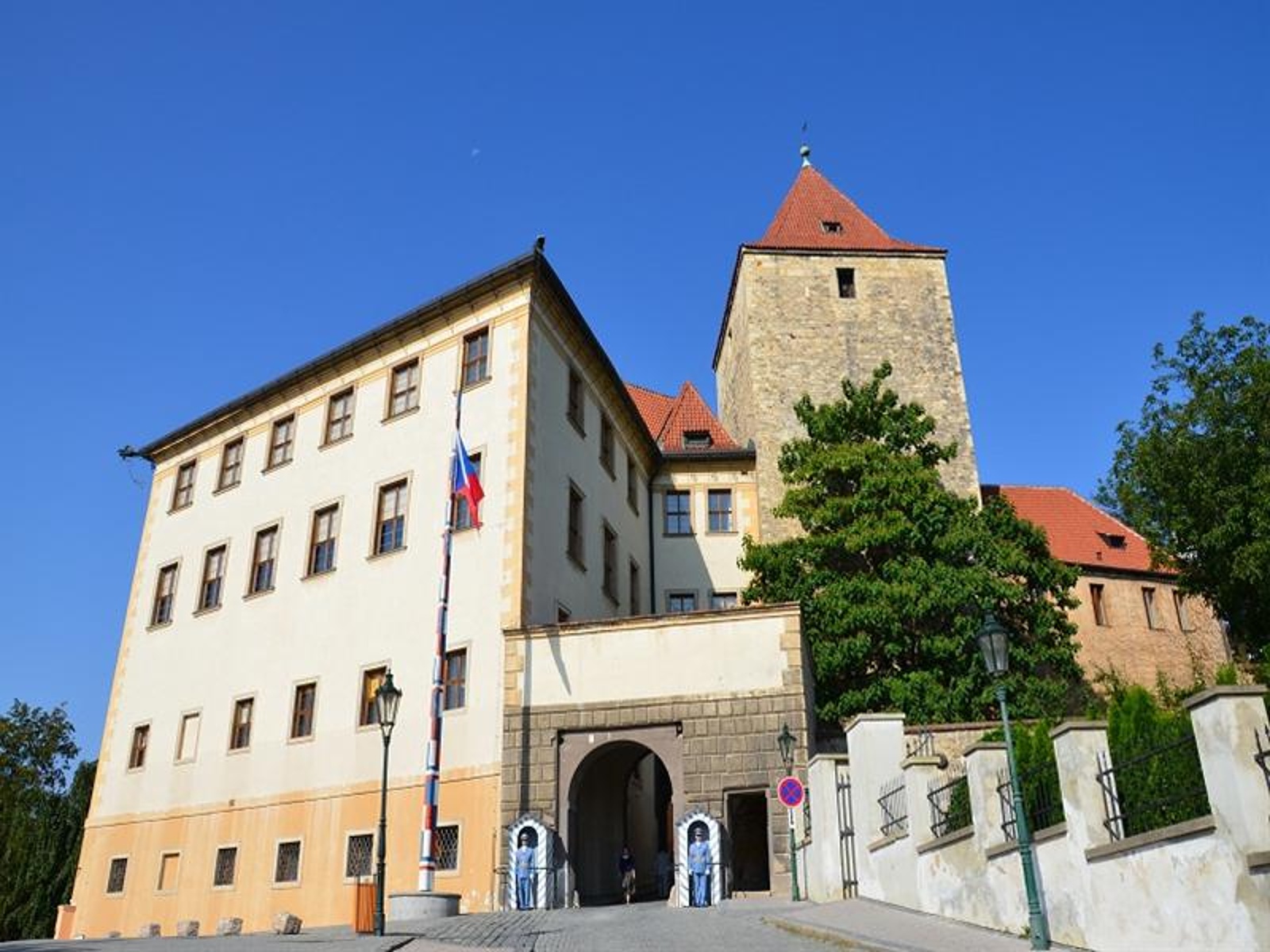 Still following the path to the end of the castle, you will come accross the Baroque palace of the Lobkowicz family, located near the exit that leads to the Old Castle steps. The main curiosity of this place is that the property is the only private one of the Prague Castle (and therefore, it is not part of the circuit). Inside is an exhibition with many works of art (highlighting works by Canaletto, Bruegel, Cranach and Velázquez) and valuable personal objects that belonged to members of the Lobkowicz family, such as some original scores by Mozart and Beethoven. There is also a café restaurant with a terrace offering an incredible view of the city (the Lobkowicz Palace Café).

Speaking of food and beverages, in the square in front of the Basilica of St. George there are usually street stands with typical foods. Within the castle complex there are plenty of cafes and places to eat, but the price is steep, as one can imagine at such a tourist location.

Other points of interest are the castle towers, the Powder Tower, the Daliborka Tower and the White and Black Towers. Here you can find places that you heard on your child stories, with dungeons and monumental vaults. All of them were built to protect the castle and had different purposes afterwards, even imprisonment for indebted people or members of royalty.

A little bit extra at the end

The Prague Castle is in fact a small town. At the time of threat it can be locked up from public and should be self sufficient for several weeks. There is even a private gas station for the President’s fleet. Not every alley, courtyard and streets are open to visitors.

Prague Castle is the most important landmark to explore, particularly for those who would like to indulge in Prague’s history and culture. There is so much to see there. It is well preserved, and the architecture is incredible. The buildings are impressive and is like walking into a fairy tale. Amazing architecture, amazing history, amazing views of the city!