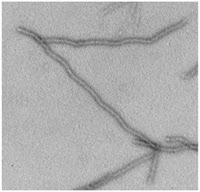 Misfolded Proteins are not just useless — they can be toxic. Some of them form linear aggregates known as Amyloid fibres that can lead to disorders such as Alzheimer’s and Parkinson’s diseases. Writing in PLoS Biology, James Shorter and colleagues describe a protein machinery that inhibits the formation and helps to dissolve such fibres.

Heat shock proteins (HSPs) assist other proteins in folding. The authors set out to study whether two small Hsps from baker’s Yeast (Hsp26 and Hsp42) could affect the generation of Amyloid Fibres by a misfolded protein of the same organism (Sup35). Using purified proteins, the researchers showed that Hsp26 and Hsp42 inhibited amyloid formation. Moreover, they determined exactly which steps of the process were affected: Hsp42 slowed down an early structural reorganization of small aggregates before the fibres were formed, whereas Hsp26 inhibited fibre growth.

Yeast cells have a protein called Hsp104 that rapidly dissolves amyloid. However, humans and other animals lack such an enzyme, and so it was unclear how our cells can get rid of amyloid fibres. The authors report that Sup35 fibres can be dissolved by a combination of several yeast HSPs (Hsp40, Hsp70 and Hsp110) in the absence of Hsp104, especially if the fibres are pretreated with Hsp26 and Hsp42. What’s more, they obtained similar results when using the equivalent human HSPs to disaggregate α-synuclein amyloid fibres, which are involved in Parkinson's disease. Although amyloid disassembly took many days, the researchers propose that such system could be functional in long-lasting cells such as neurons.

Shorter and colleagues’ findings suggest that enhancing the activity of certain HSPs in affected cells — and/or introducing yeast Hsp104 — could help to dissolve the amyloid in disorders such as Parkinson’s disease. However, additional research would be needed to assess the efficacy and safety of such potential treatments before these could be tested in people.

Reference (and source of the image):