As I mentioned in my previous post, thanks to the internet, I could peek into the meeting of the American Society for Microbiology (ASM), recently held in California, from the comfort of my home at London, UK. This was possible because some of the meeting attendees posted comments on Twitter, in real time, and also because the meeting organizers made a live video broadcast available to everyone through the internet (that is, a webcast).

The webcast, called ASM Live, consisted of nine interviews to researchers on their latest findings. The interviews were very aptly handled by Jeff Fox, Features Editor for Microbe Magazine (a freely available, monthly magazine published by the ASM). Moreover, viewers were allowed to submit questions to the researchers by either using the online chat (provided by UStream) or tweeting to @MicrobeWorld.

Two of the most popular interviews seemed to be The Gulf oil spill: microbes to the rescue? and The first synthetic genome: what does this mean for microbiology, and for everybody else?? [note that there were two question marks in the original title, and this is not necessarily a typo :) ] 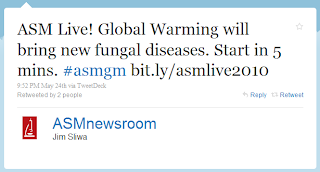 All the interviews were really interesting -- and you can still watch them: they are archived at MicrobeWorld (an online community for sharing multimedia resources related to microbiology) and UStream.tv (the live interactive broadcast platform that was used for the ASM webcast).

My sincere congratulations to everybody involved in the making and broadcasting of the interviews, that was a great piece of work! 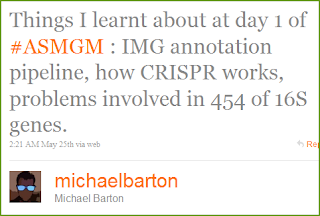 About 1,200 messages containing the #asmgm hashtag were posted to Twitter in relation to the ASM meeting. There were all kinds of messages, and many of them were informative, insightful, or funny. Some of them included links to interesting articles or websites, while others redirected to photos captured during the meeting. I mentioned a couple of popular tweets in a previous blog post, and I'm including here a few more as illustrations. 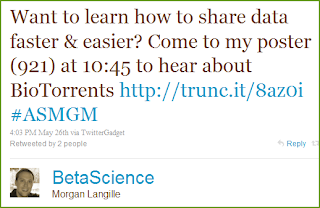 However, if you search for the #asmgm hashtag on Twitter, you will only get recent messages posted during the last 7-10 days -- which is really disappointing.

Luckily, Alan Wolf had the brilliant idea of creating an archive for #asmgm tweets on Twapper Keeper. The archive is freely available online, so anybody can read and download all the messages. 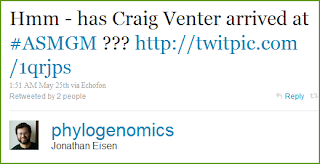 In addition to archiving, there are other ways of reading 'old' Twitter messages: for instance, I find Topsy quite useful. However, archiving seems a very sensible idea to me -- especially for scientific conferences.

[Note: Twapper Keeper can only reach back as far as Twitter allows, so the archive needs to be started as soon as possible (ideally a few days before the conference, to include any pre-meeting tweets)] 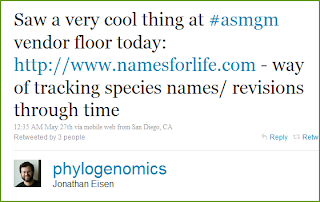 Once the ASM meeting was over, I thought that a word cloud, as a visual representation of 'hot topics' (the most tweeted), could be a nice illustration for a blog post. So, I searched the internet looking for a suitable, user-friendly online tool that would generate -- automagically -- the perfect word cloud for me. But I did not find it.

After a trial-and-error process, I finally made a nice-looking cloud (which was featured image of the week at MicrobeWorld) using Wordle, but the result wasn't exactly what I had in mind:

Why wasn't I fully satisfied with my cloud? Firstly, because I had to do a lot of manual editing of the tweets: removing highly repetitive terms (such as "#asmgm", "RT"), fixing typos, stemming (a little), putting some words together to create meaningful tags (e.g. "San-Diego")... Also, the cloud was colourful and nice-looking, but the words were not individually hyperlinked (as in most tag clouds, see for instance the cloud located at the upper right side of my blog).

[Note: a tweetup is a meeting of two or more people who know each other through Twitter]

There are some online tools to generate tag clouds from Twitter messages. For instance, Tweetcloud seems to get quite close to what I have in mind. It indeed generates a tag cloud for a specific keyword (or user). But it seems to be limited by the Twitter search function (it only uses messages posted in the last 7-10 days). So, I guess I could have used this tool the day after the ASM meeting to create a cloud... but I didn't known about Tweetcloud at the time. Still, the cloud is not customizable at all.

So, I want to finish this post summarizing the characteristics of what I think would be an ideal tool to create word clouds from Twitter messages:

D) Customizing the aspect of the cloud


Please leave your comments, ideas or suggestions on creating Twitter tag clouds, or on the use of live webcast and Twitter for scientific conferences. 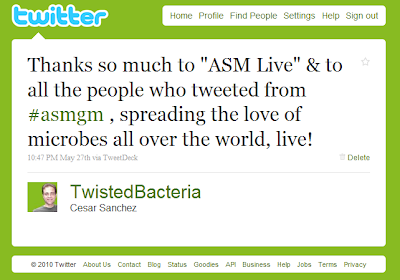 Note added on June 23rd:
I just read a great article on this topic: Twitterpated: Using Social Media at Academic Conferences. I found it via Hacking the Academy, a book that was crowdsourced on Twitter in one week. It deals with online education, scholarly communication and much more.

- Added July 3rd: How to create a PDF archive of hashtagged tweets by Andrew Spong, STweM. It describes a simple workflow for archiving conference tweets. Found via FriendFeed.

- Added August 15th: SfN the Meh by DrugMonkey. Advice to the Society for Neuroscience (and other scientific societies): how to use social media for your next conference.

- Added September 4, 2010: Summarizr is a service that creates "a brief summary of a Twapper Keeper tweet archive. It works for #hashtag archives, keyword archives and @person archives. Just enter a hashtag, keyword, Twitter account name or archive URL in the form". See Twitter usage at the ASM meeting, based on TwapperKeeper archive of hashtag #asmgm.