TED videos: excellent talks about life, the universe and everything -- including microbes

TED is a nonprofit organization devoted to "ideas worth spreading." They are mostly known because of their growing collection of fascinating talks about a wide array of topics, including science, art and anything in-between (or around). The talks are recorded and the videos are freely available at their website, where you can also find information about the speakers and interactive transcripts (including translations to various languages).

In this post I'm collecting links to all the TED videos I could find related to the microbial world.

Topics include: life in the deep oceans, medical mysteries, bacterial Esperanto, predicting pandemics, robots turned into microbiologists, new approaches to handle infectious diseases, looking for life on Mars and beyond, fungi that could save the world, bacteria that may have caused mass extinctions...

I'm also embedding a video for one of the latest TED talks: Seth Berkley: HIV and flu -- the vaccine strategy. The speaker, epidemiologist Seth Berkley, is the founder of the International AIDS Vaccine Initiative. In this talk, filmed last February, he spoke about new methods for making vaccines for AIDS and flu.

I also recommend reading this interview on the TED blog, where Seth Berkley commented on the same subject. I am copying here a few remarkable quotes:

I was very disappointed by public concerns that we ordered too much flu vaccine and that some might get wasted. (...) I think that both declaring this a global pandemic and accelerating vaccine production as quickly as possible were the right decisions. If you want to prepare a population for an emergency it means that you might ultimately spend some money that isn’t used.

That's a good point. Many criticisms have been raised in the last months against WHO decisions in relation to the recent flu pandemic. And some of those criticisms were undeserved, in my opinion.


In the interview, Berkley explained why so much effort was put on developing treatments --rather than preventive vaccines-- for AIDS. And he described the extraordinary work they're doing with the International AIDS Vaccine Initiative.


To the question "Are the members of the younger generation of scientists as invested in creating a vaccine as was the case 10 years ago or so?" he responded:

Sadly not. (...) The problem is not that young scientists don’t think vaccines are incredibly important, the problem is that it is seen as such a difficult problem, such a long-term problem that what they’re worried about is: Can they build a career on it? Can they get the types of breakthroughs they need in a rapid time frame that would make it a productive place to work?

It is disturbing that the "productivity" concept not only is doing harm to many researchers' careers but may also be slowing down the development of much-needed medical treatments...


Why not focus just on the treatment of infected people, and forget about an AIDS vaccine? Berkley explained:

(...) from a public policy point of view, there’s great expense involved in dealing with the epidemic through treatment and reaching people when they’re already infected. (...) But this is a long-term entitlement program, because once you put somebody on treatment, they have to get treatment for the rest of their lives and they develop conditions, they develop toxicity and they need other treatments. So, there’s almost a sense now that all of the bright lights of that unbelievable effort -- the unprecedented emergency program for AIDS relief, Bush’s triumph that people look on as being a great thing that he did, will create a demand that gets higher and higher and higher just to keep up with where we are.

So, making an effective vaccine against AIDS may be very difficult. But it is worth the effort.


And finally, as promised, this is the list of other TED videos related to the small living beings (in chronological order, newest first):

Self Motivation: How to Keep Moving F…
Where to shop Nigerian fashion brands…
Holiday Cards – A Brief History
Average Penis Size: Smaller Than You …
How to Develop an Educational App?

Nathan Wolfe: hunting the next killer virus. "Virus hunter Nathan Wolfe is outwitting the next pandemic by staying two steps ahead: discovering deadly new viruses where they first emerge -- passing from animals to humans among poor subsistence hunters in Africa -- before they claim millions of lives." February 2009.

Bonnie Bassler: discovering bacteria's amazing communication system. "Bonnie Bassler discovered that bacteria "talk" to each other, using a chemical language that lets them coordinate defense and mount attacks. The find has stunning implications for medicine, industry -- and our understanding of ourselves." February 2009.

Hans Rosling on HIV: New facts and stunning data visuals. "Hans Rosling unveils new data visuals that untangle the complex risk factors of one of the world's deadliest (and most misunderstood) diseases: HIV. He argues that preventing transmissions -- not drug treatments -- is the key to ending the epidemic." February 2009.

Kary Mullis' next-gen cure for killer infections. "Drug-resistant bacteria kills, even in top hospitals. But now tough infections like staph and anthrax may be in for a surprise. Nobel-winning chemist Kary Mullis, who watched a friend die when powerful antibiotics failed, unveils a radical new cure that shows extraordinary promise." February 2009.

Peter Ward: Earth's Mass Extinctions. "Asteroid strikes get all the coverage, but "Medea Hypothesis" author Peter Ward argues that most of Earth's mass extinctions were caused by lowly bacteria. The culprit, a poison called hydrogen sulfide, may have an interesting application in medicine." February 2008.

Paul Ewald: can we domesticate germs? "Evolutionary biologist Paul Ewald drags us into the sewer to discuss germs. Why are some more harmful than others? How could we make the harmful ones benign? Searching for answers, he examines a disgusting, fascinating case: diarrhea.". March 2007. (I embedded this video in a previous post.)

Bill Stone explores the world's deepest caves. "Bill Stone, a maverick cave explorer who has plumbed Earth’s deepest abysses, discusses his efforts to mine lunar ice for space fuel and to build an autonomous robot for studying Jupiter’s moon Europa." "How do you take a robot and turn it into a field microbiologist?" March 2007.

Laurie Garrett on lessons from the 1918 flu. "In 2007, as the world worried about a possible avian flu epidemic, Laurie Garrett, author of "The Coming Plague," gave this powerful talk to a small TED University audience. Her insights from past pandemics are suddenly more relevant than ever." February 2007. 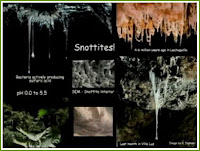 Penelope Boston says there might be life on Mars. "So the Mars Rovers didn't scoop up any alien lifeforms. Scientist Penelope Boston thinks there's a good chance -- a 25 to 50 percent chance, in fact -- that life might exist on Mars, deep inside the planet's caves. She details how we should look and why." February 2006. 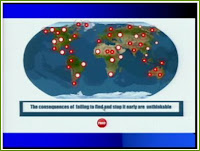 Larry Brilliant wants to stop pandemics. "Accepting the 2006 TED Prize, Dr. Larry Brilliant talks about how smallpox was eradicated from the planet, and calls for a new global system that can identify and contain pandemics before they spread". February 2006. 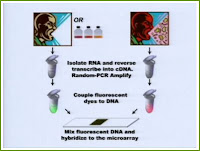 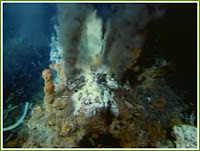 David Gallo on life in the deep oceans. "With vibrant video clips captured by submarines, David Gallo takes us to some of Earth's darkest, most violent, toxic and beautiful habitats, the valleys and volcanic ridges of the oceans' depths, where life is bizarre, resilient and shockingly abundant." February 1998.

TED videos: excellent talks about life, the universe and everything -- including microbes