El Classico has always been one of the most anticipated game in a football season, and this is because the rivalry that trails the match is quite epic. Form the same league, Barcelona and Real Madrid are two great teams from the Spanish La Liga, and they both have players that have what it takes to fight to the finish. This year’s El Classico was played yesterday, and it was quite a remarkable one. In this article, we have compiled the highlights and all that went down in the 2018/2019 El Classico as with Real Madrid Coach Sacked.

The 2018/2019 El Classico that was played at the home of Barcelona this week was quite a game. Barcelona went on to secure their victory, beating Real Madrid 5 goal to nil. What was also significant about the match was the absence of the star man of both of the two teams.

Cristiano Ronaldo had initially left real Madrid for Juventus at the beginning of the season while Messi is currently not on the pitch due to an injury. This is the first time in a decade that an El Classico match will be played in the absence of the two world stars. 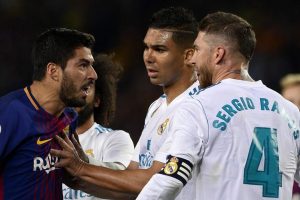 At the beginning of the match, which was played at Camp Nou, Barcelona had more possession of the ball and found the goal around the 11th minute. The away side showed some improvement in the 23rd minute, but this was quickly ruined when a penalty was given in favor of Barcelona. And Suárez wasted no time in turning the opportunity into a goal.

Marcelo eventually scored a goal at the beginning of the second half and perhaps Madrid fans were hoping for a comeback or at least a draw. But this how was quickly dashed when Suárez put in two more goals to complete a hat-trick. Vidal finally drove the game to favor his side with an 87th-minute goal. And that was the last goal of the game.

Madrid has not been in top form this season, and their manager, Julen Lopetegui has already been shown the exit door with this latest result. The club is already looking for his replacement as they cannot afford to continue the season this way. Meanwhile the club is now in the 9th position and they might not even make the top four if they don’t step up their game.