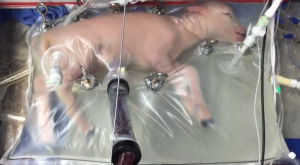 Scientists in Philadelphia have been able to invent an Artificial Womb for premature babies that can preserve a fetal lamp till it is due for birth. This is a technological attempt to raise babies outside the womb.

وضعية الجنين في الحمل
Exhibit D: Lipstick and rifles--Ukra…
Introducing Superior Painters® Sub-Di…
“Focus on the possibilities for succe…
Black And White Thinking: What It Is …

The artificial womb is a fluid- filled bag that provides all the things  the natural womb could do.  The machine is an improvement of incubators. It is sterilized and has temperature control elements. It also contains amniotic fluid to preserve the baby.

They launched this invention on a fetal lamb for weeks. The lambs were placed inside the transparent bag and their umbilical cords were connected to a machine that oxygenated their blood. The hearts of the lambs served as the pumping power.

Eight lambs were tested on this device and they successfully survived for as long as four weeks inside this invented womb. The calculated age of the animals were comparable to the human fetus of 22 weeks which is about the initial stage a human baby can survive outside the womb.

The animals in the invented womb were able to move eyes and stretch. They were officially born when the doctors removed them from the artificial womb. The tests that were done on them proved that they had developed properly and their health test tallied with that of a mature healthy infant.

Patridge, a scientist says that placing babies inside the new device, which imitates a woman’s uterus, could lower  the risk of death or long lasting problems by allowing babies finish developing.

The goal of the scientists behind this innovation is  to remodel the artificial womb so it will look more like a traditional incubator, comfortable to use and parent-friendly.