One part of a recent survey caught my attention:

In other words, most of the general public appears to believe that the existence of abrupt climate change A large-scale change in the climate system that takes place over a few decades or less, persists (or is anticipated to persist) for at least a few decades, and causes substantial disruptions in human and natural systems. (formerly known as anthropogenic ‘Human-caused’ global warming) is a question of politics rather than science. They’re not looking at evidence published in peer-reviewed science journals before adopting a position. Instead, they seem to decide that their political party’s position on climate change is “X,” so they believe “X.” Finally, this explains why some people who watch a documentary that exaggerates the science end up imitating that smug politician’s You have to realize that I view ‘politician’ as a VERY dirty word in order to get the full effect of this sentence. alarmism. I run into hordes of them on campus, and I always rebuff their attempts to guilt me out of driving by saying “Why worry about the Earth when we’ve got 7 planets R.I.P. Pluto, 1930-2006 to spare?!”

To begin with, it’s indisputable that the Earth’s climate has varied wildly in the past. Vostok ice core data confirm that for nearly half a million years, the climate has changed cyclically. In all that time, the maximum CO2 concentration never went above 300 ppm parts per million . It’s hit higher levels millions of years ago, but usually Heinrich and Dansgaard-Oeschger events (among other examples of natural abrupt climate change) show that the natural climate is only fairly stable in the long run. These events show that the climate can quickly move from one stable “attractor” to another. I should stress, however, that results like Meehl 2004 show that today’s changes aren’t natural. in gradual ways. Plus, the Earth was essentially a different planet back then, with a different biosphere basking under the light of a very slightly The Sun was only barely fainter tens of millions of years ago, but high CO2 concentrations hundreds of millions of years ago or more were partially compensated for by the lower solar luminosity. Also, the continents shift on these timescales which affects the climate too. dimmer Sun so comparisons across that much time are tricky at best. 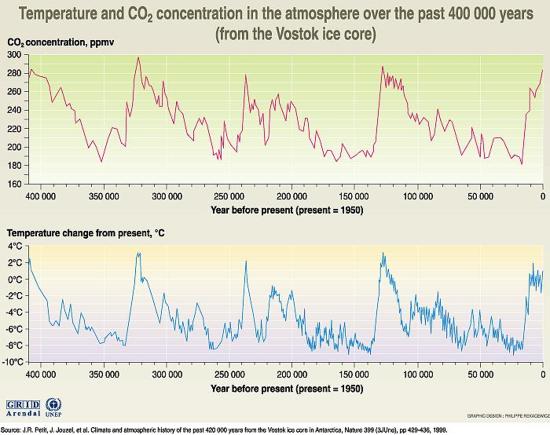 Natural variations are evident in the data, of course. The most prominent cycles over geological time are governed by (among other effects) Milankovitch cycles which are caused by periodic variations in the Earth’s orbit.

Bizarrely, the CO2 concentration is at 380 ppm parts per million today. That’s ~26% higher than it’s been in the last half million years. Notice that the current CO2 concentration is off the scale of the Vostok data graph. If this is due to natural variability alone, it’s quite a coincidence that it’s happening right after we started burning enough oil to fuel ~800 million cars, and burning coal by the gigaton to supply ~50% of our electricity.

Furthermore, it seems like the CO2 at Vostok typically increased centuries after the temperature started to increase. (Ice core data are difficult to analyze in this manner, though.) At least, that’s the way it used to work. Right now, the CO2 concentration is at an unprecedented level but the temperature is barely above normal. Again, this implies that we’re not experiencing natural climate variability because what’s happening today doesn’t match the behavior of the ancient climate.

According to physics that was firmly established decades before I was born, CO2 warms the planet by absorbing infrared radiation from the ground better than it absorbs visible radiation from the Sun. So this rapidly increasing CO2 should cause a rapid temperature increase: 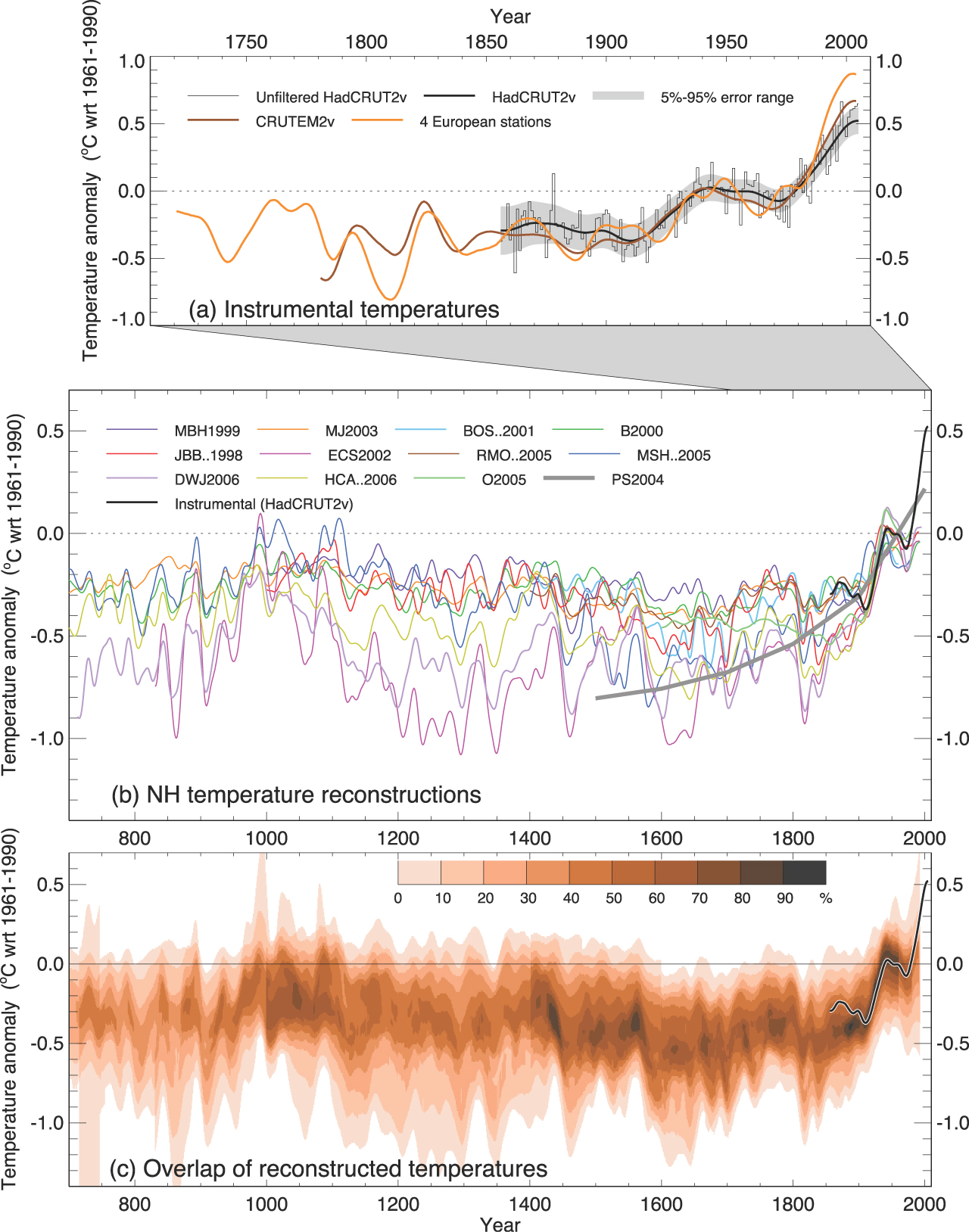 The above graphs are quite busy, so here’s an overview of each one:

Perhaps this is a coincidence? All the evidence I’ve described so far just shows that CO2 and temperatures have both risen in an apparently artificial manner in the last few decades. But Meehl 2004 tested whether or not recent temperature observations could be explained by natural variations alone:

The black curve represents observations. The blue curve represents the result of a computer simulation that accounts for natural variations like volcanic eruptions and changes in the brightness of the Sun. The shaded blue area represents the uncertainty of that simulation. The red curve includes all the natural variations in the blue curve, but adds human emissions like CO2 and sulfate aerosols. Notice that after ~1970 the observed temperatures aren’t consistent with natural variations, but they are within the error bars of the prediction made by accounting for human emissions.

The Earth is so massive and ancient that we tend to instinctively believe ‘Don’t treat C02 as a pollutant’ in the Christian Science Monitor by Mark W. Hendrickson on June 23, 2009 wrongly says “And how do you propose to regulate Earth’s temperature when as much as three-quarters of the variability is due to variations in solar activity, with the remaining one-quarter due to changes in Earth’s orbit, axis, and albedo (reflectivity)? This truly is ‘mission impossible.’ Mankind can no more regulate Earth’s temperature than it can the tides. … 1. Human activity accounts for less than 4 percent of global CO2 emissions. 2. CO2 itself accounts for only 10 or 20 percent of the greenhouse effect. This discloses the capricious nature of the EPA’s decision to classify CO2 as a pollutant, for if CO2 is a pollutant because it is a greenhouse gas, then the most common greenhouse gas of all – water vapor, which accounts for more than three-quarters of the atmosphere’s greenhouse effect – should be regulated, too. The EPA isn’t going after water vapor, of course, because then everyone would realize how absurd climate-control regulation really is.” that humans aren’t powerful enough to affect the climate on this scale. For example, those awe-inspiring volcanic eruptions simply must dwarf anything we do, right? Surprisingly, humans emit ~100x more CO2 than volcanoes.

Even still, the Earth is a stable system, right? Won’t our changes to the atmosphere just provoke a natural response that cancels them out, preventing us from significantly altering the climate? Well… maybe. The natural climate certainly did appear fairly Heinrich and Dansgaard-Oeschger events (among other examples of natural abrupt climate change) show that the natural climate is only fairly stable in the long run. These events show that the climate can quickly move from one stable “attractor” to another. I should stress, however, that results like Meehl 2004 show that today’s changes aren’t natural. stable in our absence. However, a number of positive feedback effects present the disturbing possibility that the climate is only metastable:

There are also negative feedback effects, such as the fact that trees grow faster in higher CO2 and thus store carbon in their wood faster. [Update Thanks to Dr. Geoffrey A. Landis for his additions and corrections to this section and the faint young Sun caveat. by Dr. Landis: Also, the Stefan-Boltzmann equation says that hotter objects radiate more, and higher temperatures = more evaporation = more clouds = higher albedo.] But I worry that the abrupt spike in CO2 levels might cause positive feedback effects to dominate– at least temporarily. In other words, it seems likely that a little bit of warming will lead to more warming.

Bottom line: As far as I can tell there’s a mountain of scientific evidence showing that abrupt climate change A large-scale change in the climate system that takes place over a few decades or less, persists (or is anticipated to persist) for at least a few decades, and causes substantial disruptions in human and natural systems. is a matter of serious concern.

On a completely different note, as an ordinary American I think we should do something about this matter. We’re still the most To my foreign colleagues and friends: You wanna fight about it? :) technologically advanced nation in the world, with one of the largest, best educated workforces in history. Our economy is very capitalistic, which makes us highly adaptable compared to more socialist countries that are mired in bureaucracy. If any country can solve this problem, it’s us.

The legislation currently in the Senate needs to be passed. This bill has already been weakened in the House and it’s only the first step, but it’s the least we can do to convince the world that the United States is ready to lead once again.

Update: Here are some related videos:

I’ve been discussing abrupt climate change A large-scale change in the climate system that takes place over a few decades or less, persists (or is anticipated to persist) for at least a few decades, and causes substantial disruptions in human and natural systems. on the internet for several years, mostly at Slashdot under the pseudonym khayman80. The interesting bits of these conversations have been copied here, but please note that my statements have been edited Each comment is linked back to the original location in the Slashdot archives so you can compare the current version to the original. Those links look like: [Dumb Scientist] or [Jane Q. Public] and expanded since I first wrote them. Here’s an index with links to each conversation:

This post first appeared on Dumb Scientist, please read the originial post: here
People also like
TummyTox – Summer Sale
IT Managed Services Provider Resource Recommendation Update on June 01, 2022
11 Unforgettable Things to Do in Belize — Important Tips & Places to Stay
Thinking on whether or not you should get into crypto? Read this!
Useful Tips for Building a Stronger Company Culture
Beard Bib – Solution For Messy Grooming