St. Stephen of Hungary: The King who converted his country to Catholicism 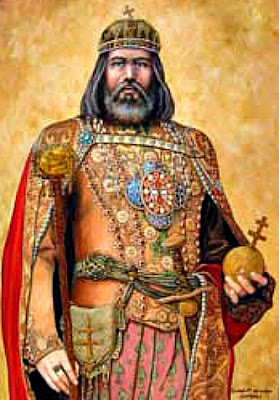 On August 16, the Church commemorates the feast day of St. Stephen of Hungary (975 - 1038), the last Grand Prince of the Hungarians (997 -1000) and the first Christian king of Hungary, who led his country to embrace Christianity.

Prior to Stephen's birth, his mother, the duchess Sarolt had a vision in which St. Stephen, the martyr appeared to her and told her that her son would convert the people of Hungary to Catholicism.

Born a pagan, Stephen was baptized at age 10, along with his parents, and was raised as a Christian. At the age of 20, he married Gisela, the daughter of Duke Henry II of Bavaria.

Stephen crushed the pagan counter-reaction to Christianity, and converted the so-called Black Hungarians after their failed rebellion. In recognition of his efforts, Stephen was crowned king of Hungary at the age of 25, receiving the cross and the crown from Pope Sylvester II. His crown and regalia became beloved symbols of the Hungarian nation, and Stephen was venerated as the ideal Christian king. He devoted much of his reign to the promotion of the Christian faith. He gave his patronage to Church leaders, helped build churches, and was a proponent of the rights of the Holy See.

The secret of St. Stephen's amazing success in leading his people to the Christian faith was his deep devotion to the Blessed Virgin Mary. He placed his entire kingdom under her protection and built a magnificent church in her honor.

Only one of Stephen's children survived to adulthood. Stephen's only living son Emeric was raised a Catholic and was expected to succeed his father as king. However, Emeric died before Stephen, after a hunting accident in 1031.

In 1038, on the feast of the Assumption of the Virgin Mary, Stephen spoke his final words to leaders of the Church and state, instructing them to protect and spread the Catholic faith.

He directed one of his last prayers to the Blessed Mother: “To thee, O Queen of heaven, and to thy guardianship, I commend the holy Church, all the bishops and the clergy, the whole kingdom, its rulers and inhabitants; but before all, I commend my soul to thy care.”

Stephen served as King of Hungary for 42 years and died at Szekesfehervar on August 15, 1038.  He was buried alongside his son St. Emeric, and the two were canonized together in 1083. Soon after Stephen's death, miracles of healing occurred at his tomb.

He is the patron saint of: bricklayers, death of children, Hungary, kings, masons, stone masons, and stone cutters.

St. Stephen of Hungary: The King who converted his country to Catholicism