Reader, The Christian Post want to know is it appropriate for Pastor Jamal Bryant to encourage members of  his Church to sit during national anthem like NFL quarterback Colin Kaepernick?

"Pastor Jamal Bryant is going above and beyond to show his support for NFL quarterback Colin Kaepernick by not only wearing his jersey during a sermon on Sunday but also by encouraging his entire congregation to remain seated during the national anthem. Bryant, the pastor of Empowerment Temple AME Church in Baltimore, Maryland, said yesterday that he approves of the San Francisco 49ers’ backup quarterback’s protest after he announced two weeks ago that he plans to sit during every performance of “The Star-Spangled Banner” at NFL games to represent “people that are being oppressed.” On Sunday, Bryant shared a photo of himself wearing Kaepernick’s jersey on Instagram before revealing that he and his congregation would be joining the professional athlete’s protest by sitting down while the national anthem was played during the service". 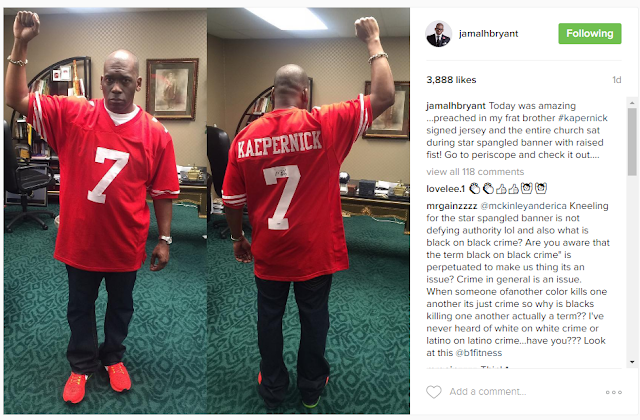