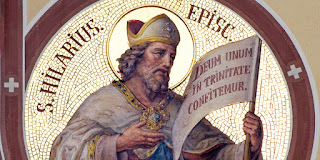 He, therefore, being the perfect Father's perfect Son, the Only-begotten Offspring of the unbegotten God, who has received all from Him Who possesses all, being God from God, Spirit from Spirit, light from light, says boldly, The Father in Me, and I in the Father. For as the Father is Spirit, so is the Son Spirit; as the Father is God, so is the Son God; as the Father islight, so is the Son light. Thus those properties which are in the Father are the source of those wherewith the Son is endowed; that is, He is wholly Son of Him Who is wholly Father; not imported from without, for before the Son nothing was; not made from nothing, for the Son is from God; not a son partially, for the fulness of the Godhead is in the Son; not a Son in some respects, but in all; a Son according to the will of Him who had the power, after a manner which He only knows. What is in the Father is in the Son also; what is in the Unbegotten is in the Only-begotten also. The One is from the Other, and they Two are a Unity; not Two made One, yet One in the Other, for that which is in Both is the same. The Father is in the Son, for the Son is from Him; the Son is in the Father, because the Father is His sole Origin; the Only-begotten is in the Unbegotten, because He is the Only-begotten from the Unbegotten. Thus mutually Each is in the Other, for as all is perfect in the Unbegotten Father, so all is perfect in the Only-begotten Son. This is the Unity which is in Son and Father, this the power, this the love; our hope, and faith, and truth, and way, and life is not to dispute the Father's powers or to depreciate the Son, but to reverence the mystery and majesty of His birth; to set the unbegotten Father above all rivalry, and count the Only-begotten Son as His equal eternity and might, confessing concerning God the Son that He is from God.
+       +       +
John speaks thus; -- For we know that the Son of God is come, and was incarnate for us, and suffered, and rose again from the dead and took us for Himself, and gave us a good understanding that we may know Him that is true, and may be in His true Son Jesus Christ. He is true and is life eternal and our resurrection. Wisdom doomed to an evil end, void of the Spirit of God, destined to possess the spirit and the name of Antichrist, blind to the truth that the Son of God came to fulfil the mystery of our salvation, and unworthy in that blindness to perceive the light of that sovereign knowledge! For this wisdom asserts that Jesus Christ is no true Son of God, but a creature of His, Who bears the Divine name by adoption. In what dark oracle of hidden knowledge was the secret learnt? To whose research do we owe this, the great discovery of the day? Were you he that lay upon the bosom of the Lord? You he to whom in the familiar intercourse of loveHe revealed the mystery? Was it you that alone followed Him to the foot of the Cross? And while He was charging you to receive Mary as your Mother, did He teach you this secret, as the token of His peculiar lovefor yourself? Or did you run to the Sepulchre, and reach it sooner even than Peter, and so gain this knowledge there? Or was it amid the throngs of angels, and sealed books whose clasps none can open, and manifold influences of the signs of heaven, and unknown songs of the eternal choirs, that the Lamb, your Guide, revealed to you this godly doctrine, that the Father is no Father, the Son no Son, nor nature, nor truth? For you transform all these into lies. The Apostle, by that most excellent knowledge that was granted him, speaks of the Son of God as true. You assert His creation, proclaim His adoption, deny His birth. While the true Son of God is eternal lifeand resurrection to us, for him, in whose eyes He is not true, there is neither eternal life nor resurrection. And this is the lesson taught by John, the disciple beloved of the Lord.
Sincerely yours in Jesus through Mary,
Mike Rizzio

Imitate Mary
PeterBecome like Jesus
Live for the Triune God

Seek the Light of Our Lord Jesus Christ
See you on the High Ground!

Robb Banks Talks Anime, Music And Lif…
How To Help Your Husband Get On Board…
Follow-Up to “Don’t Be Stupid”
Actress Busi Lurayi found dead in her…
iHerb – Father’s Day Sale on Men’s He…
The Holy Eucharist and E=mc2...think about Jesus Christ through whom all things were created, both spiritual and temporal


This post first appeared on Mystery Of Truth And E=mc2, please read the originial post: here
People also like
Robb Banks Talks Anime, Music And Life At Rolling Loud Miami
How To Help Your Husband Get On Board With Prepping – Part 2
Follow-Up to “Don’t Be Stupid”
Actress Busi Lurayi found dead in her daughter’s room (More details)
iHerb – Father’s Day Sale on Men’s Health & Fitness