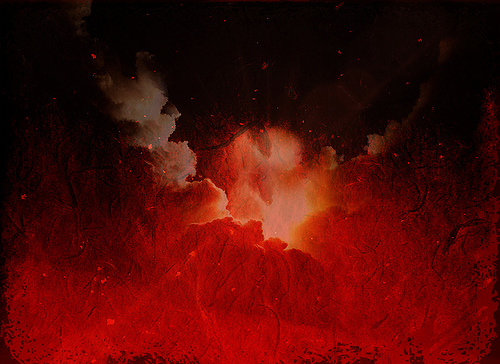 The devil, who deceived them, was cast into the lake of fire and brimstone where the beast and the false prophet are. And they will be tormented day and night forever and ever. (Revelation 20:10 NKJV)

Mention the words “fire and brimstone” and it might conjure up images of ranting preachers breathing out hellfire and damnation. It is dramatic language that evokes the senses and makes for good theater, but how would John’s readers have understood it in the book of Revelation? I’ve already addressed the meaning of “forever and ever,” or rather of the Greek words that are translated that way (see here and here): A literal rendering would be “to ages of ages,” which may be a long, long time, but is not the same as everlasting. But now let’s consider “fire,” “brimstone” and “torment.”
Fire
In the Bible, fire is often used for the purpose of testing or purification. In Zechariah, for example, the Lord says concerning a time of judgment, “This third I will put into the fire; I will refine them like silver and test them like gold” (Zechariah 13:9). The book of Malachi speaks of a coming day of judgment and says, “But who can endure the day of His coming? And who can stand when He appears? For He is like a refiner’s fire and like launderers’ soap” (Malachi 3:2 NKJV). The refiner’s fire separates the silver from the dross, burning off what is worthless while preserving what is valuable. Paul, in his letter to the believers at Corinth, speaks similarly of fire in the day of judgment:

For no one can lay any foundation other than the one already laid, which is Jesus Christ. If anyone builds on this foundation using gold, silver, costly stones, wood, hay or straw, their work will be shown for what it is, because the Day will bring it to light. It will be revealed with fire, and the fire will test the quality of each person's work. If what has been built survives, the builder will receive a reward. If it is burned up, the builder will suffer loss but yet will be saved — even though only as one escaping through the flames. (1 Corinthians 3:11-15)

Notice again that it is only what is worthless that is destroyed, the base things, while what has value is preserved. The soul is not destroyed by the fire but is purged by it. That does not mean that the soul is inherently indestructible, only that God does not intend the fire to destroy the soul.

These examples pertain to the people of God, but they show that God is both willing and able to let what is evil or worthless be burned away yet retain what is precious. That is the nature of God’s judgment: setting things right, eliminating what does not belong and establishing what is good.

In both the Old and New Testaments, we are told that “God is a consuming fire” (Deuteronomy 4:24; Hebrews 12:29). But to understand that through Christ, who fulfills all the Scriptures and is the perfect expression of God, we must also remember that “God is love” (1 John 4:8). That means that love is not just an attribute of God, something God does. Love is what God is by his very nature — it is fundamental to his being. How we think of God as consuming fire, then, must be consistent with God as love.

There is never a point at which God ceases to be love, for then God would cease to be God. Everything God does, even in judgment on the wicked, is for the purpose of love — even for the sake of the wicked, who, underneath all their wickedness, are created in the image of God and are objects of his eternal love. The consuming fire of God’s love, then, is a refiner’s fire, not for the purpose of destroying but for cleansing and purification.

Brimstone
The Greek word for “brimstone” is a very interesting one. It refers to sulphur, but the Greek name for it is theion, a word that apparently derives from theios, which means “godlike” or “divine.” Vine’s Expository Dictionary says that it originally denoted “fire from heaven,” and adds, “Places touched by lightning were called theia, and, as lightning leaves a sulphurous smell, and sulphur was used in pagan purifications, it received the name of theion.” Thayer’s Greek Definitions gives the meaning as “divine incense, because burning brimstone was regarded as having power to purify, and to ward off disease.”

The Liddell-Scott-Jones Greek-English Lexicon notes that theion is called for in the Odyssey (16:228) to “fumigate and purify.” In that passage, “Ulysses says to Euryclea, ‘Bring me sulphur [theion], which cleanses all pollution, and fetch fire also that I may burn it, and purify the cloisters.’” (Odyssey, Chapter 22). In the Greek text, is it pur kai theion, “fire and brimstone.” Both are used together to cleanse and purify.

Torment
The Greek word for “torment” is another interesting word: basanizo, from basano, the initial meaning of which is, as Thayer’s notes, “a touchstone, which is a black siliceous stone used to test the purity of gold or silver by the color of the streak produced on it by rubbing it with either metal.” This would be a test that reveals the authenticity or measure of what is being tested. Figuratively, there are several different kinds of torments and causes indicated in Scripture.
In it also used in different ways within the book of Revelation. In Revelation 9:5, it is the torment caused by the plague on earth indicated when the fifth trumpet is sounded. In Revelation 11:10, the preaching of the two prophets is a torment to those who are not willing to receive their message. In Revelation 12:2, it is the pain of travail as the woman gives birth. In Revelation 14:10, as in 20:10, it is the torment associated with “fire and brimstone.”

There is no question that John intends to describe an experience that is indeed a torment, but the simple use of basanizo does not tell us about the nature or significance of that torment. However, if the figure of fire and brimstone suggests some process of purification, that would tell us something about the nature of the torment associated with it, that it is for the purpose of bringing forth what is true and of value — the soul, as God originally created it to be.

John’s Audience
Let us also consider John’s audience for a moment. The book of Revelation was written for Christians, particularly those of John’s own day. They were not taught to be a vengeful people or to rejoice at the torment of others but to forgive their persecutors, even to pray that God would forgive them — that is what Christ taught, and he demonstrated it supremely at the cross. They were also taught that God is love (1 John 4:8). Shall we then suppose they heard the words of fire and brimstone and torment in the book of Revelation and imagined it was not ultimately about restoration but about retribution? That would seem to be a contradiction of what the gospel teaches.

Are these points conclusive? That will be a matter of opinion, and the Church has never had a universal view on the meaning of this passage or the ultimate nature of hell. But I offer these as important considerations. The book of Revelation is an apocalyptic literature, a genre that is highly figurative, symbolic and hyperbolic. We cannot simply read it as if it were describing literal things, and that can make it difficult to draw hard and fast conclusions. But whatever is meant by “fire,” “brimstone” and “torment,” the main point is that, in the end, the wicked will no longer be a problem. And given the nature of the apocalyptic genre, however this imagery functions in Revelation does not ultimately prevent the reconciliation of all things to God through Christ and his cross as it is expressed elsewhere in the New Testament.

“The Friend Who May Not Seem a Friend…
Globe 5G traffic up 24x in February
How Do You Get Bed Bugs?
ALBUM: Sun-EL Musician – To The World…
10 Home Maintenance Tasks and Items T…