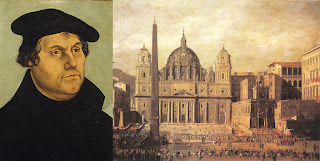 The German Cardinal Gerhard Ludwig Müller has turned against a softly swept ecumenism. What is termed Martin Luther's Reformation was, in fact, a revolution and "contrary to the Holy Spirit." according to Müller.

The former head of the Congregation for the Doctrine of the Faith wrote this in a contribution to the website "La Nuova Bussola Quotidiana".
The desire for good relations with non-Catholics can only have the aim of leading to full communion with the Catholic hierarchy, assuming the "apostolic tradition according to Catholic doctrine".
Not a Church reform in the Catholic sense
In Luther's opinion, the struggle against some abuses at the time of indulgences or against the "sins of the Renaissance Church" was by no means sufficient, according to Müller. From his writings, "it is absolutely clear that Luther has left behind all the principles of the Catholic faith behind him."
Thus he had replaced the "objective efficacy of the sacraments with a subjective faith." The abolition of five of the Seven Sacraments, the denial of the Eucharist, and the criticism by Luther of office meant that the Reformation could not be described as a "church reform in the Catholic sense."
Luther was seen too enthusiastically
Luther was often discussed "too enthusiastically", wrote Müller. The reason for this was an ignorance of the theology of Luther, his polemic, and the "disastrous consequences of this movement which, for millions of Christians, meant the destruction of unity with the Catholic Church."

Today, one must also perceive the action of the Holy Spirit in non-Catholic Christians; they did not commit the "sin of separation from the Catholic Church". A reconciliation, however, could not happen "at the cost of truth."
No dialogue on the substance of the doctrine of faith
There could be no dialogue with the Protestants on the substance of the doctrine of faith; put another way, the Church "has taught," for more than a thousand years of faith, a faith which we know-and this is a kernel of the doctrine of faith-that the Church can not err in the handing on of salvation in the sacraments. "
At the same time, Müller complained of a "confusion" regarding the binding nature of the Catholic doctrine. Many thought "the Pope is infallible when he speaks privately," but they disputed what "the popes throughout history" represented. Müller was, since his appointment by Benedict in July 2012,  the Prefect of the Congregation for the Doctrine of the Faith . After the expiration of the five-year term, Pope Francis Francis nominated as his successor, the secretary of the Congregation, Archbishop Luis Ladaria."
Source

Why Friday The 13th Will Be Your Luck…
Stablecoins be a Way to Break U.S. Do…
Remembrance Day, as Seen Through the …
Four Things Jesus Says About a Discip…
Best Story-Rich Games on PC: November…