+ Cyril of Alexandria, Bishop and Confessor + 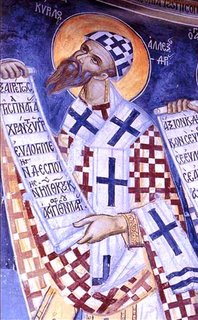 Saint Cyril (ca. AD 376-444) became Patriarch of Alexandria, Egypt in 412. Throughout his career he defended a number of orthodox doctrines, among them the teaching that Mary, the mother of Jesus, is "rightly called and truly is the Mother of God" — Theotokos, "the God-Bearer" (Formula of Concord, Epitome, VIII:12). In 431 the Council of Ephesus affirmed this teaching that the Son of Mary is also true God.

The Council was responding to the Nestorian heresy, which distinguished so completely between the divine and human natures of Christ that claims were made that the divine Christ did some things while the human Jesus did others.

Some of the differences are quite subtle; perhaps even Nestorius himself could not have foreseen the full ramifications of his position, including a "resurrection" of only the divine nature. Ephesus condemned the title of "Christ-Bearer" (Christotokos) for the Virgin, since the Nestorians would only claim that Mary bore the Christ, but not God Himself.

Cyril receives almost as many brickbats as he does bouquets, even from orthodox Christians, because he's also known for being what one person calls "an ill-tempered, quarrelsome, hasty, and violent man." This seems especially so during his early years as Bishop of Alexandria.

A particularly acute example of his extreme rigidity comes from his closing of Novatianist churches, although the Novationists weren't particularly unorthodox. Their "fault" was as much one of pride as of theology — they descended from those who'd stood firm in the persecutions of earlier years and refused to associate or worship with the heirs of those who recanted the Faith under persecution. Their main theological aberration were insisting upon rebaptism of converts from "lapsed" Christianity and an attitude that was, perhaps, less than Christ-like in dealing with erring brothers.

Cyril also ran the Jews out of town. The reason given was that they were seditious and violent, although we're left with little evidence. This action likely contributed to an ongoing feud with Orestes, the imperial prefect. These disagreements seemingly spilled over into a quarrel with the prefect's friend, the neo-platonist scholar Hypatia, who was later murdered by a mob.

Few have directly condemned Cyril for her death but the leaders of the mob certainly claimed the bishop as their leader. In modern times, Carl Sagan, in his book Cosmos, blamed Hypatia's death (and the destruction of the great Library of Alexandria) on dogmatic Christianity's desire to root out rational paganism. However, other scholars see the whole feud as an internal Church struggle and no one has yet established a definitive cause (or date) for the final destruction of Alexandria's library.

At any rate, and despite the considerable rancor that accompanied his early years as bishop, the mature Cyril worked diligently to reconcile the Nestorian and Orthodox parties. His efforts led many of the less virulent Nestorians back to full communion.

The writings of Cyril on the doctrines of the Trinity and the person of Christ reveal him to be one of the most able theologians of his time. Cyril's Christology influenced subsequent church councils and was a primary source for Lutheran confessional writings. He still speaks clearly to our age, especially as the old Christological heresies are trotted out under new guises.

Heavenly Father, You used Your servant Cyril to confess the mysteries of the Holy Trinity and of Your Son being one person with fully divine and human natures. Grant that we, also, might be constant in Your Word, bold in Your confession, and steadfast in Your worship, to the glory of Your holy Name; through Jesus Christ our Lord, who lives and reigns with You and the Holy Spirit, one God, now and forever.

This post first appeared on Aardvark Alley, please read the originial post: here
People also like
Have you ever made love in front of other people?
Why SEO Is The Next Big Thing in the Real Estate Industry
Witnessing an Aggressive Event
Telegram Marketing solutions
It's Time To Rebuild
Well said Mr. PM, We’re racing with time but..
Pineapple juice benefits for skin
What You Need to Know About Sydney Epoxy Flooring
Natural Remedies For Common Health Issues
Legit Way To Make Money Online

+ Cyril of Alexandria, Bishop and Confessor +