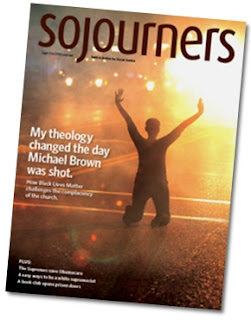 We have of course heard the term Low Information Voters who are uninformed, and remain absolutely clueless as the the actual facts, positions and accomplishments of the candidates they vote for and support.  Low information voters believe lies and ideological rhetoric, resulting in their support of candidates that promote untruths.  Take the example of the cover of Sojourners magazine on the right with the image of Michael Brown holding his hands up in surrender supposedly stating: "Don't Shoot".   Informed people are well aware that this event which was manufactured and promoted by the nation's race-merchants, never happened.   Furthermore, this bogus fraud has been promoted by the secular left to make war on the police, and has resulted in the massive death of innocent people in all the nations cities where far-left politicians hold the reigns of political power.  And while this lie has been propagated to bring about a political advantage, it has resulted in the slaughter of inner-city innocent men, women and children.   Yet, we now find it openly promoted on the cover of one of the leading liberal Christian groups cover.  With the statement: "My theology changed the day Michael Brown was shot".  Did God intend a believer to change their theology based upon ideological lies and untruths?

Throughout history, bogus frauds and lies -- often promoted by charlatan priests and clergy in conjunction with secular authorities who were their benefactors -- have always framed the theology of Low Information Christians.  Resulting in the reality that the modern Church has virtually nothing in common with the original teachings of Jesus and TheWay.  But to these bogus religious leaders such as Sojourners who promote lies manufactured by race merchants to Low Information believers, the scriptures warn that because of your lack of knowledge, God has totally abandoned you as seen at Hosea 4:6: "My people are destroyed for lack of knowledge; because you have rejected knowledge, I reject you from being a priest to me. And since you have forgotten the law of your God, I also will forget your children."


Historically it can be proven and recognized that those who were directly taught, and were the closest to the Source of an Enlightened Spiritual Teacher and Visionary, were always the most correct in their practice and doctrines which were formed on the foundation of those original teachings.   Historically, over the course of time, the original teachings always become corrupted, to the degree that at many points they oppose the core concepts of these teachings on numerous important points.  In the same way that the theology of the Pharisees did not represent the Spiritual Core of Judaism as embraced by the Essenes -- and modern  Islam has virtually nothing in common with the core of the original teachings which was to learn from the True Prophet (see The True Prophet) -- modern Christianity has little in common with the original teachings of Jesus and TheWay -- while the quasi-Marxist theology of Jim Wallis and Sojourners, has virtually nothing in common with the original Gospel Message.  It is also relevant in this time of racial violence and upheaval, that Jim Wallis who heads Sojourner, is the spiritual adviser to Pres. Barrack Obama.

In demonstration of the fact that modern Christianity has little in common with the original teachings of Jesus and TheWay, I set before you the words of Prof. Millar Burrows who acknowledged the facts in his book, More Light on the Dead Sea Scrolls, where he states: “There are those who believe or assume that the Greek and Hebrew texts from which our translations are made are infallible. No person who has studied textual criticism at all could believe that. The most conservative scholars in the most conservative churches recognize that the text has become corrupt at many points in the course of its transmission. If that were not already well known and universally admitted, the Dead Sea Scrolls would demonstrate it conclusively.”    And in the same book Dead Sea Scroll expert A. Powell Davies is quoted as stating that "Biblical scholars were not disturbed by what they found in the Dead Sea Scrolls because they had known all along that the origin of Christianity was not what was commonly supposed to have been"  Both of which statements were supported by Prof. John Allegro who confirmed in the August 1966 issue of Harpers Magazine that: "The very scholars who should be most capable of working on the documents and interpreting them have displayed a not altogether surprising, but nonetheless curious, reluctance to go to the heart of their matter. The scholars appear to have held back from making discoveries which, there is evidence to believe, may upset a great many basic teachings of the Christian Church. This in turn would greatly upset many Christian Theologians and believers. The heart of the matter is, in fact, the source and originality of Christian doctrine".  While it is easily demonstrated that the mainline Churches baptize their Congregations in the name of the christ of Pagan Rome (see Sacratments.Nazirene.org ), Jim Wallis and Sojourners baptizes Low Information believers into the christ of Marxism.  And this historical and theological fact is easily proven.

Low Information Ostrich Believers: Why does it matter what was found and confirmed in the Dead Sea Scrolls with respect to Christian beginnings?  Because these writings confirm the fact that modern Church dogma has virtually nothing in common with the original teachings of Jesus.   Man-made dogma that is supported by proven corrupted biblical manuscripts (see BibleCorruption.com ).  Man-made dogma that was forced upon the Church by a series of evil Roman Emperors and their appointed clergy, which fraudulent dogma was supported by hunting down the Spiritual Christians who refused to embrace the religion of the emperor, and were murdered as heretics.   And regardless of the facts, this bogus body of man-made dogma continues to be promoted by charlatan clergy and Low Information Christian Believers!!!

In an interview with uber liberal clergyman Brian McLaren by Christianity Today, he is quoted as stating: "One of the problems is that the average Christian in the average church who listens to the average Christian broadcasting has such an oversimplified understanding of both the Bible and of church history - it would be deeply disturbing for them to really learn about church history"  Thus, Low Information Christians are very much like ostriches with their heads in the sand hiding from the historical and spiritual facts they remain ignorantly in denial of.

If the question is posed as to how I can prove that the dogmatic foundation of the modern Church is based upon a bogus fraud which intentionally misrepresents the original teachings of Jesus?   One only has to read the original teachings on the proper use of the New Covenant Sacraments, to verify what I am stating (see Sacraments.Nazirene.org .   But so long as the congregations remain Low Information believers who hide their heads in the dogmatic sands of man-made doctrines, such groups as Sojourners will continue to promote their modern edition of Marxist Christianity that promotes government ordained social programs and collective salvation instead of the original teachings of Jesus and TheWay.

It should be noted that the conclusion of the Adam Clark Bible Commentary on the early position of the pre-Nicene Church that Jesus was a holy man who became the Christ on the basis of fulfilling the Law within himself as set forth in the original Gospel teachings, would render the modern dogmatic Church in their words: "... the whole Christian system is vain and baseless" -- and this historical and spiritual fact is proven at TheTenWords.com .

Spiritually Bankrupt African-American Communities: Michael Brown was a victim of such quasi-religious groups as Sojourners who promote a leftist anti-Gospel agenda.   Because the African-American communities are both Low Information voters, as well as Low Information believers, they have made themselves victims of charlatan religious leaders who have alienated the people from God.  Statistics demonstrate conclusively that the Black community has abandoned the Spiritual Sacrament of Marriage (see Sacrament of Marriage).   Yet, the facts demonstrate that Marriage is the leading factor in resolving the issue of childhood poverty (see Americas Greatest Weapon Against Childhood Poverty).  The African-American community has been led by counterfeit clergy to abandon the Sacrament of Baptism (see Spiritual Baptism) -- and having defiled the necessary spiritual "wedding garment" that is needed to come to TheCall (see Wedding Garment), they have brought judgment and condemnation upon themselves.   Does Black lives really matter?   Every day innocent African-Americans are slain by other African-Americans who have embraced a culture that denigrates women, tramples upon the teachings of the Son of God, and has totally destroyed the Black Community.   And instead of repenting from their ungodly culture that immerses their communities in sin and inequity, they follow charlatans such as Jim Wallis and Sojourners who have seduced them into abandoning the oracles of God, while embracing the Satanic broad-way that leads to the proverbial fires of Hell.  And when rightly understood, Michael Brown was a victim of counterfeit man-made dogma and the charlatan clergy who guide the Low Information believer in the way of spiritual darkness.

What kind of fool and idiot would make the profoundly ignorant statement that  "My theology changed the day Michael Brown was shot"   Michael Brown and the African-American communities have long ago abandoned the original teachings of Jesus and the Sacramental Oracles of God.   When St. Augustine created the doctrine of Original Sin as a cloak for those who abandoned the original Gospel message, he was opposed by Palagius who correctly stated that  “Man is able, if he likes, to live without sin and keep the commandments of God, in as much as God gives him this ability”  Pelagius did not say that the journey in TheWay was easy -- only that if the believer was sincere at keeping the Gospel Sacraments, that "..God gives him this ability” to live a Consecrated Life apart from the sins of the flesh that presently immerses the Black Communities who are led by uber liberal clergy and politicians who are portrayed in the Gospels as the wolves in sheep's attire who seduce the Low Information believers and congregations into the ways of death and self-destruction.  In the words of Jesus: "And why call ye me, Lord, Lord, and do not the things which I say?" (Luke 6:46 KJV).